Aeroponics: a piece of the urban farming jigsaw puzzle?

Ed Harwood is willing to concede that many folks think of urban farming as raised beds on vacant lots. 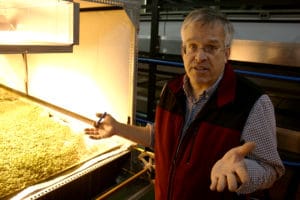 But he also thinks there’s another way to grow vegetables in cities that’s just as promising, and it uses a new stackable, modular hydroponics technology called aeroponics, that his company AeroFarms has refined and now offers to other growers.

“I haven’t seen any silver bullet for [urban farming] yet,” he says. “Everything has its own technical limitations.”

In a nutshell, aeroponics is a system of growing plants by continuously spraying a mist of nutrient-laden water on their roots, which hang in the air in a special system.
Though hydroponics is a system as old as Babylon, aeroponics is a more recent innovation — it was originally developed in the 80s as a research application to allow scientists to better study root growth. Harwood’s four-employee company tested the system for more than four years before deciding to offer the technology to others.

The benefits to the method? Better airflow, Harwood says, in addition to less water usage and, of course, the ability to grow vegetables year round. In addition, he has perfected a reusable cloth medium for growing the plants, which saves costs, and says that even though the system is not technically organic, it requires much less water and virtually no pesticides or herbicides because of the contained environment, making it more sustainable than conventional cropping.

Plus, a farmer using the system can grow fresh greens year round, and not have to worry so much about food safety, since there’s no contact with soil borne pathogens or animal manure.

“Greens go straight into the bag, so most sources of contamination in conventional systems are avoided,” he says.
He envisions the technology AeroFarms sells as a way to fill the many abandoned buildings within upstate New York cities with small, productive farms. In fact, the building where his system is located is in an old canoe factory in Marathon, NY, although he has plans to move his operation to Ithaca, NY in the future.

The system currently works well for growing mostly leafy greens and herbs, and, though the cost for the smallest system is currently $20,000, he’s hoping the results will shatter expectations. He has a program that allows potential buyers to test the product with a short term lease, because he knows it’s a new technology that some people might be wary of trying. Harwood also puts that $20,000 into perspective:

“My brother has a tractor that cost him 220,000 dollars,” Harwood says. “Aeroponics is as capital intensive as dairy farming, you can start out fairly small, and grow, but nevertheless you’re going to be putting into a fair amount of capital.”

The smallest system, called the AGL21, requires a 25 square foot room, and with a growing surface of 91 square feet, should produce 48 to 68 pounds of produce a month, depending on the crop, Harwood says. Monthly inputs are 122 gallons of water, 1.6 gallons of fertilizer, and about 5 ounces of seed. The units are also stackable up to seven high, to make most use of the space. In comparison, a conventional agricultural crop requires 27 gallons of water to produce one pound of food.

His company has already installed the first system in a grow operation in Newark, NJ, and he recently received $500,000 in venture capital funding to expand the product marketing and R&D.

“We’ve put science behind it,” he says, noting that he spent years perfecting the design, and selling the crop for a profit, before deciding to sell to others. “We have been doing experimentation with an LED array, and we’re making a significant investment in how plants see light, so we can better use artificial light. We’re also working with North Carolina state to perfect the cloth growing medium, and to grow a wider variety of crops.”

Even if it’s ultimately not the right system for a small urban farmer, Harwood encourages them to at least look into it more, at his website.

“We have been working to support farmer’s business models,” he says. “For a very little investment they can do a fair amount of their market plan, they can also lease a unit, show it to investors, vendors, have an open house to expand on that market analysis. We make sure it’s the right system for people.”

But according to one Cornell University professor who’s used similar aeroponic technology in his research on root diseases three years ago, the system had some serious downsides.

“We were never satisfied with the concept,” said Lou Albright, a professor in the department of biological and environmental engineering, who built a system three years ago. “With the slightest interruption [of power] you don’t have [mist] coming into the chamber, so you really have to back up the system. It doesn’t have to happen very many times a year, but it can cause you to go bankrupt.”

In addition, nozzles tend to be easily clogged, energy costs were higher than expected and the growth and vigor was never as good as normal hydroponic systems, Albright said.

“They’re solvable, but I don’t know it’s worth the efforts,” he said. “[Harwood’s] very brave to try this.”

Harwood said he’s resolved many of these difficulties, or they simply don’t apply to a commercial grower – high energy costs are wiped out by low input costs and profits, he said, and the clients he’s looking to sell to will have backup power generators to avoid crop losses. In addition, Harwood said he’s developed proprietary nozzle technology to avoid nutrient buildup and clogging, and his yields are comparable with existing hydroponic systems.

For those who doubt the technology’s promise, Harwood suggests looking to an unlikely constituency of early adopters, often thought of as the bellwether group for indoor growing technology — marijuana growers.

“They completely believe in it,” he said.

Aaron Munzer is a freelance writer and farmer at Plowbreak Farm in Hector, NY.  He may be reached at aaronmunzer@gmail.com
Posted in Small Farms Quarterly, Urban Ag