By Paul Van Amburgh
Dairy farmers are suffering in the midst of dairy’s worst financial crash ever. With the very existence of the family dairy farm in question, 2010 promises many foreclosures, for both conventional and organic farms. 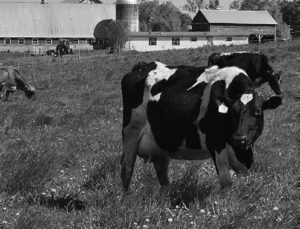 The right kind of cow for a grainless pasture based system is wide and deep. Photo by Dietrich Gehring

As dairy farmers, my wife Phyllis and I understand that we do not control the greater economy or the price we are paid, but we can take charge of our cost of production. The key to doing so lies in mimicking grass-eating mammals in nature, a very different paradigm than industrial agriculture.
By following ecological and organic principles, we are finding a way to navigate the economic challenges of dairy farming. This path will enable us to produce milk that is far healthier than most milk available today. Here are some of the unconventional choices we have made.
Grazing and seasonal dairying
The very center of our production model is grass, aka pasture. Our 150 acres of pasture is divided into over 40 paddocks. The herd enters a new paddock every twelve hours during the grazing season, which starts around May 1 and finishes around Thanksgiving in our area of New York. As each paddock is grazed in turn over the season, the cattle fertilize it by distributing their own manure. We only need a tractor to mechanically spread the small amount of manure that accumulates in the milking barn. Eventually our team of Clydesdales will spread this manure with a horse-drawn spreader.

All replacement calves are raised on their mothers. Photo by Dietrich Gehring

Before he became a farmer, Paul was self-employed contractor who did skilled renovations. He gained his love of cows growing up in North Greenbush, where his family lived between the Ottman dairy and one of the last diversified livestock farms in the area. When he met his future wife Phyllis, she had a team of Clydesdales and was finishing her degree in Occupational Therapy. Drawn to raise their own food, Paul and Phyllis purchased their first farm in Montgomery County about ten years ago. They raised grass-fed beef and pastured hogs, and had a big vegetable garden. In 2007 they purchased their Sharon Springs farm and dairy herd, and have been milking 50 cows and raising grass-fed Devon beef and laying hens at dharma lea.

Our approach involves experimentation. This does bring economic risks but we feel an urgency to change direction now. The farmer can no longer just hold out for a better price from the dairy coops. That time will never arrive. If the last 50 years hasn’t taught us that lesson, then family farms are destined for extinction. We need to apply ecological knowledge to drive costs down and quality up.
As our system matures, the next phase will be to capture a premium for our superior grass-fed product. Right now though, we must stay focused on the development of our farm and refining our plan for the future.
Paul Van Amburgh is the owner of Dharma lea farm in Sharon Springs, NY.  He can be reached at 518- 284-2546 or at dharmalea@gmail.com.
Reprint Permission:
“This article originally appeared in the Regional Farm and Food Project Spring Newsletter. The Regional Farm and Food Project is a member-supported organization linking producers, consumers, and advocates of local food in upstate New York. To learn more about the project or to become a member, visit http://www.farmandfood.org/”