The Promise of Urban Agriculture 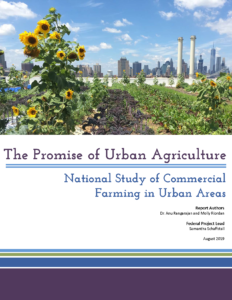 Urban and peri-urban farms have proliferated around the United States in the past decades. Although considerable attention has been paid to the impact of this emerging farm sector on social indicators, such as fresh food access, youth engagement, community development, and educational attainment, far less attention has been paid in the research literature to the economic and commercial promise of urban-based agriculture. Nevertheless, despite the high risks and narrow profit margins often associated with growing and selling farm products, some urban farms have managed to develop successful business strategies that merge economic objectives and social mission in a profitable manner.

Our purpose in conducting this study was to investigate the commercial promise of urban-based agriculture and uncover those specific urban farm characteristics that seem to be linked most closely to long-term survivability and growth. The study posits that urban farms have the potential to be commercially viable and economically self-sufficient, while offering a multitude of quality of life benefits for community residents, which may include:

Observations are drawn primarily from the experience of 14 commercial-scale urban farms located in 13 cities across the United States. The testimony provided by farmers associated with these urban farms is further enriched by interviews with more than 160 subject matter experts in the field of urban agriculture including: policymakers, urban planners, funders, additional non-case study farmers, and representatives of nonprofit and community-based organizations engaged in urban agriculture and local food systems.

Based on the results of our interview findings, we have framed the report around those specific trends in the emerging world of urban agriculture and urban policy that seem to facilitate or disrupt individual farms’ paths toward achieving financial viability.

The Promise of Urban Agriclture

This national study of commercial farming in urban areas explores the key shared experiences among the group of urban farm managers and stakeholders.