Upgrading a Flock of Hair Sheep

Hair sheep that shed and do not require shearing and are able to thrive on forage have been in high demand for many years now. High and relatively stable lamb prices have added to the demand. White Dorper and Dorper sheep, the meatiest hair sheep in the US, are high on that list of demand. That has led to an almost nationwide shortage of breeding stock of such kind, particularly when it comes to ewes. There is a way around such shortage of Dorper and White Dorper ewes, which I will outline in this article. 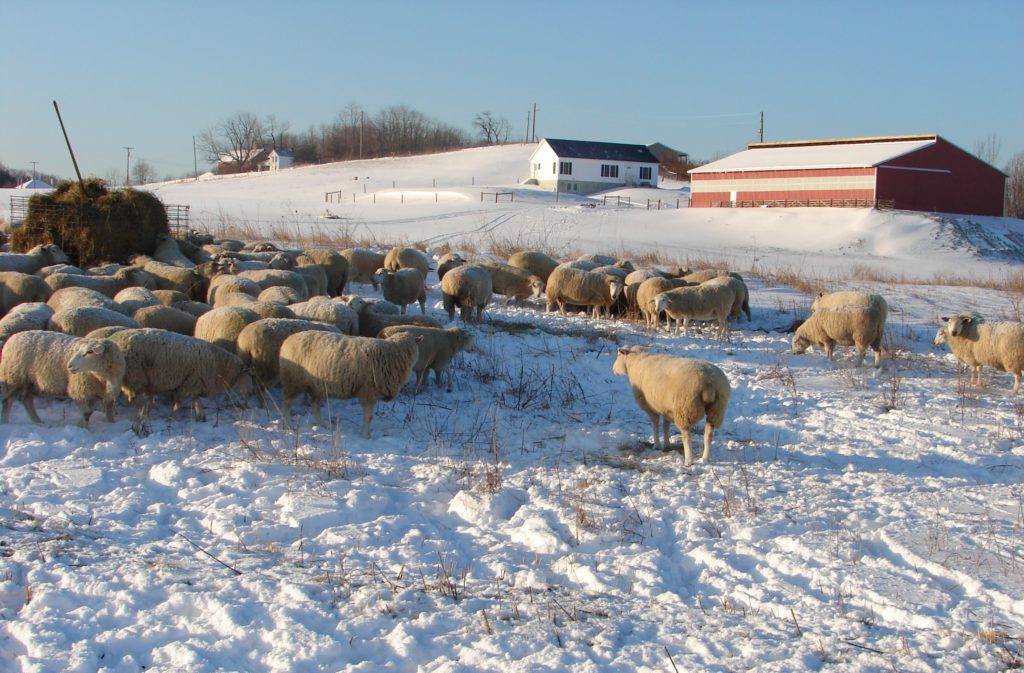 The practice of upgrading is an old, simple, and widespread practice of getting from one sheep breed to another without ever having to buy a single ewe of the desired breed of sheep. How does it work? For the sake of this explanation, let’s take an existing flock of a sheep breed called A. The desired sheep breed is called B. The desired sheep breed B may be very expensive or may be in short supply because it is new to the US market. However, it is likely that ram lambs or rams of breed B are easier to obtain than ewes. Why is that? The split of female born lambs versus male born lambs in any given flock is about 50/50. However, buyers often seek several to many ewes when they purchase a flock but far fewer rams since a ram can breed several dozen ewes during a breeding season. Thus, every sheep farmer will always need and have far fewer rams than ewes. That means ewes will sell out quicker. Rams may be more easily available.

When a ram of the sheep breed B is purchased and used to breed the flock of the breed A, the flock’s offspring will be 50 percent of breed B. If now an additional ram of breed B is purchased in a subsequent year, unrelated to the first ram since close inbreeding is often problematic, and is bred to the offspring of the first ram of breed B, all subsequent offspring is 75 percent of breed B. Since most sheep breeds make it possible for ewe lambs to be bred the same year they are born at about 8 to 9 months of age, this process only takes two years. This now can be continued for another two years and another two generations, which puts the percentage of breed B at the fourth generation at 15/16th. That is considered purebred by most sheep breed associations. In fact, when certain breeds like Dorper and White Dorper sheep were introduced from countries like South Africa and Australia, 7/8th (third generation of upgrading) were considered purebred Dorper sheep. Regardless of the current definition by a national sheep breed association, a 7/8th White Dorper sheep is in appearance and performance exactly or almost exactly like a purebred White Dorper. 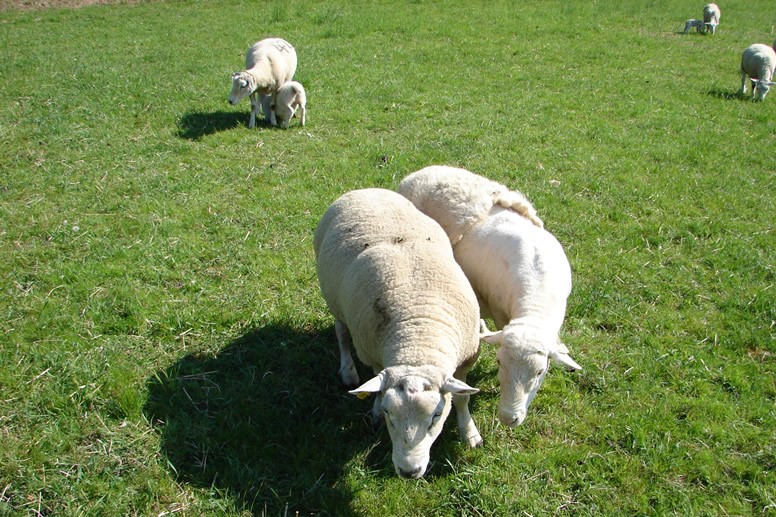 I practiced this method of upgrading myself when I had a flock of Texel sheep in the early 2000s, but White Dorper ewes in larger numbers were out of my financial reach. I purchased White Dorper rams instead. While rams usually cost more than a ewe, the cost becomes much smaller when divided by the number of ewes such ram will breed to produce offspring. The first generation of offspring (50 percent) still needed considerable shearing. The second generation (75 percent) already looked a lot like White Dorper sheep. The subsequent generation of 7/8th was basically indistinguishable from purebred White Dorpers.

What to do with the generation of ewes that were used as a steppingstone when upgrading a flock? They can often be easily sold again as a proven flock of ewes. There is no short supply of buyers of ewes.

If meaty hair sheep like White Dorper or Dorper sheep is the desired outcome, what is a breed of sheep suitable for upgrading? The first choice that comes to mind are Katahdin sheep. This breed of sheep is an American breed of hair sheep, named by its breeder after Mount Katahdin in Maine. These sheep shed well, are good mothers, lamb easily, and often have good hoof structure. Many bloodlines remain unspoiled from the show ring and thus can still perform well on pasture. What is missing in the breed is growth rate, meatiness, and overall size. The lower prices at livestock auctions, compared to wool breeds, often reflect that deficiency. Besides the breed’s many other positive attributes, they are also widely available in the US since they are easy-care sheep. Upgrading them with White Dorper rams would remedy their shortcomings. In addition, unlike my approach of upgrading my existing flock of Texel sheep, such flock will be at all levels of upgrading fully shedding. 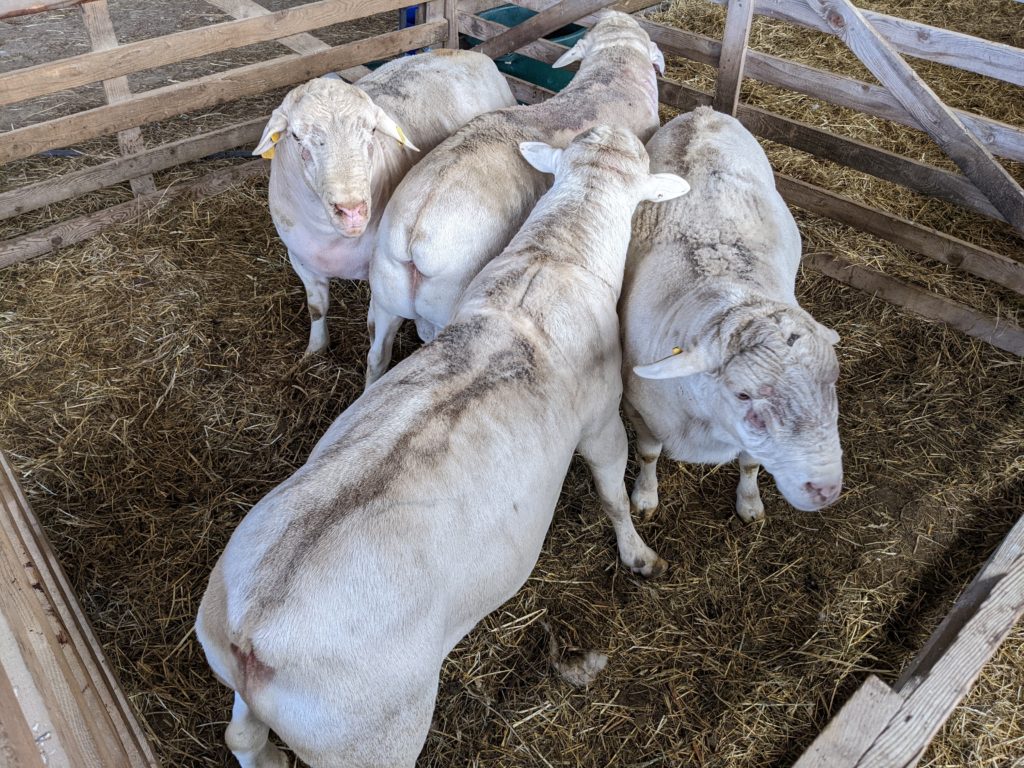 This is my current set of White Dorper rams, superior to any rams I have ever owned.
Ulf Kintzel / White Clover Sheep Farm

I personally know a great number of people who have upgraded Katahdin sheep with White Dorper rams and are highly satisfied with the results since they fetched higher prices with their lambs when sold direct or at livestock auctions. The same can be accomplished with Dorper rams but the offspring will be in the first two generation very colorful. The Dorper with a black head are genetically speaking not a white sheep with a black head but a black sheep with a huge white spot. That is where the color is coming from in the cross-bred offspring. Unfortunately, a colorful flock suggests to buyers a lack of uniformity in breeding practices, which is a big drawback when selling breeding stock but not a problem when producing market lambs. Nevertheless, that problem can be entirely avoided by using White Dorpers.

There are other breeds of hair sheep suitable for upgrading such as St. Croix hair sheep, Wiltshire Horn, and, to a lesser degree, American Blackbelly (Barbados Blackbelly). Of course, any flock of sheep, including wool sheep, can be upgraded with hair sheep. However, the first few generations will still need to be shorn, requiring the scheduling of the hard-to-find sheep shearer. Upgrading hair sheep gives you a head start and gets you to your desired result quicker. In any event, upgrading a flock takes a while longer to get to the end point and some patience is needed. However, it is financially a very viable option, especially for young farmers, who have the time to be patient but are often limited in their financial means.

Ulf owns and operates White Clover Sheep Farm and breeds and raises grass-fed White Dorper sheep without any grain feeding and offers breeding stock suitable for grazing. He is a native of Germany and lives in the US since 1995. He farms in the Finger Lakes area in upstate New York. His website address is www.whitecloversheepfarm.com. He can be reached by e-mail at ulf@whitecloversheepfarm.com or by phone during “calling hour” indicated on the answering machine at 585-554-3313.