Buying a Ram for Breeding Purposes

Discover what traits to look for in a ram.

A German proverb states: “The ram is half the flock.” Since a ram can breed dozens of ewes during a breeding season, his quality is more important than the quality of any individual ewe in that same flock. Yet, the purchase of a ram is for many small flock owners an afterthought, often attempting to buy any ram just prior to breeding season. In this article I will outline how I suggest going about selecting a new ram. 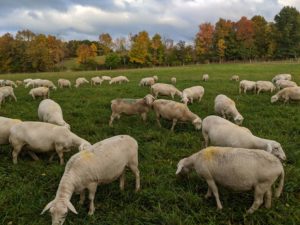 Before giving thought to the individual health, the health of the flock that he will be from deserves some scrutiny. Some common diseases are more worrisome than others. There are some diseases that can easily be managed and are in fact so widespread that it will be hard finding a flock without them. Orf (sore mouth) is one of them. Other diseases are such a big economical factor and so hard to eliminate once they are in a flock, it is best to stay away from buying a ram from a flock that has it. Hoof rot is on that list of diseases.

Regarding the individual traits of a ram, I will refer to a few traits that are specific for a grass-fed flock. They may not all apply if you feed a lot of grain. Also, my emphasis will be on meat production. If you seek an increase in wool production, many of my suggestions may not apply. Ultimately, any individual flock owner will have priorities, based on what they might want to maintain or improve in their flock.

While one may have priorities in selecting a ram, it should never be based on just one or two traits. The whole picture must always be considered. The sum of all traits is what makes the ram. 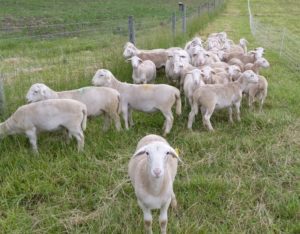 The most common request for a ram I receive is for the ram lamb to be twin born. You will have noticed that this trait is entirely absent from my list. While most ram lambs I sell are in fact twin born and my flock consists mostly of ewes that were twin born, it is still not high on the list of desirable traits when I buy a ram. Many people think that a twin born ram will sire more twins than a single born ram. That is a fundamental misunderstanding of genetics, and it is entirely incorrect. Whether a ram was born as a single, twin, or triplet has absolutely no effect on the number of twins he will sire. Many factors affect the twinning rate of a flock, few have to do with the ram. A healthy ram with good libido and a healthy sperm count will sire just as many twins as the next ram with these attributes. The number of twins is determined by the number of eggs ovulated by the ewes. That number can be tremendously influenced by the management of the ewe flock, such as the “flushing effect” (increased nutrition a few weeks prior to breeding), no stress during breeding season, no limping sheep, low parasite load, and good overall health during that time.

To learn more about twinning, read my article “Why Twinning in Lambs is a Winning Combination” from the Spring 2020 issue of the Small Farms Quarterly.

Whether or not a ram that is used is twin born has some effect on the ewe lambs that he has sired. It will increase their ability to twin as ewes. However, the ability of a ewe to twin has extremely low heritability. (Heritability is the measure of how well traits are passed on from parents to offspring. Low heritability means that a trait expressed by the offspring is mostly influenced by the environment and not by the genes). Making progress with the fertility trait takes many generations. Yet, the improvement will still only be marginal. The nutritional and health status of the ewe flock as well as the practice of flushing have a far greater impact on twinning than the ewes being twin born. What speaks against focusing on selecting twin born lambs anyway despite the low heritability? Selecting exclusively for a single trait almost inevitably means that you are also selecting against many other good traits like growth rate, good mothering, milk production, structure and so forth. The selection against other traits when selecting for a single trait happens mostly subconsciously.

My statements above relate to sheep breeds with “normal” fertility. There are breeds with higher fertility such as composite breeds that incorporated a breed like Finnsheep or crosses that include a breed like Romanov. Breeds or crosses like these can produce lamb crops well over 200 percent, meaning more than two lambs per ewe on average, instead of the 180 percent I enjoy with my White Dorper sheep. Breeds like these are an exception to the rule I have outlined but come with several other inferior traits that one needs to consider before wanting to use them for the sake of wanting to increase fertility in a flock.

I still don’t want my statements about twin born ram lambs be seen as an argument against selecting twin born rams for breeding. I would just like to point out that there are many important traits to be considered and that the fact that he may be single, twin, or triplet born should not rank too high on the list of desirable traits.

Lastly, the management of the flock from which a ram will be purchased needs to be considered as well. There is such thing as sales talk. A ram can be made to look good, for instance with heavy grain feeding, which can mask a variety of problems. Heavy hoof trimming may hide incorrect hoof structure. The way the ram looks (phenotype) the day of sale is not necessarily the way it will produce (genotype). Don’t just ask about the ram itself. You want to be informed how the flock is managed before you focus on the ram. If the management system is similar to yours or is what you strive for, a ram from such farm may be a good fit.