Thanks to a SARE-funded grant, a nonprofit Urban Farm in Binghamton, NY, was able to experiment with new ways of creating a vegetable production field from scratch. 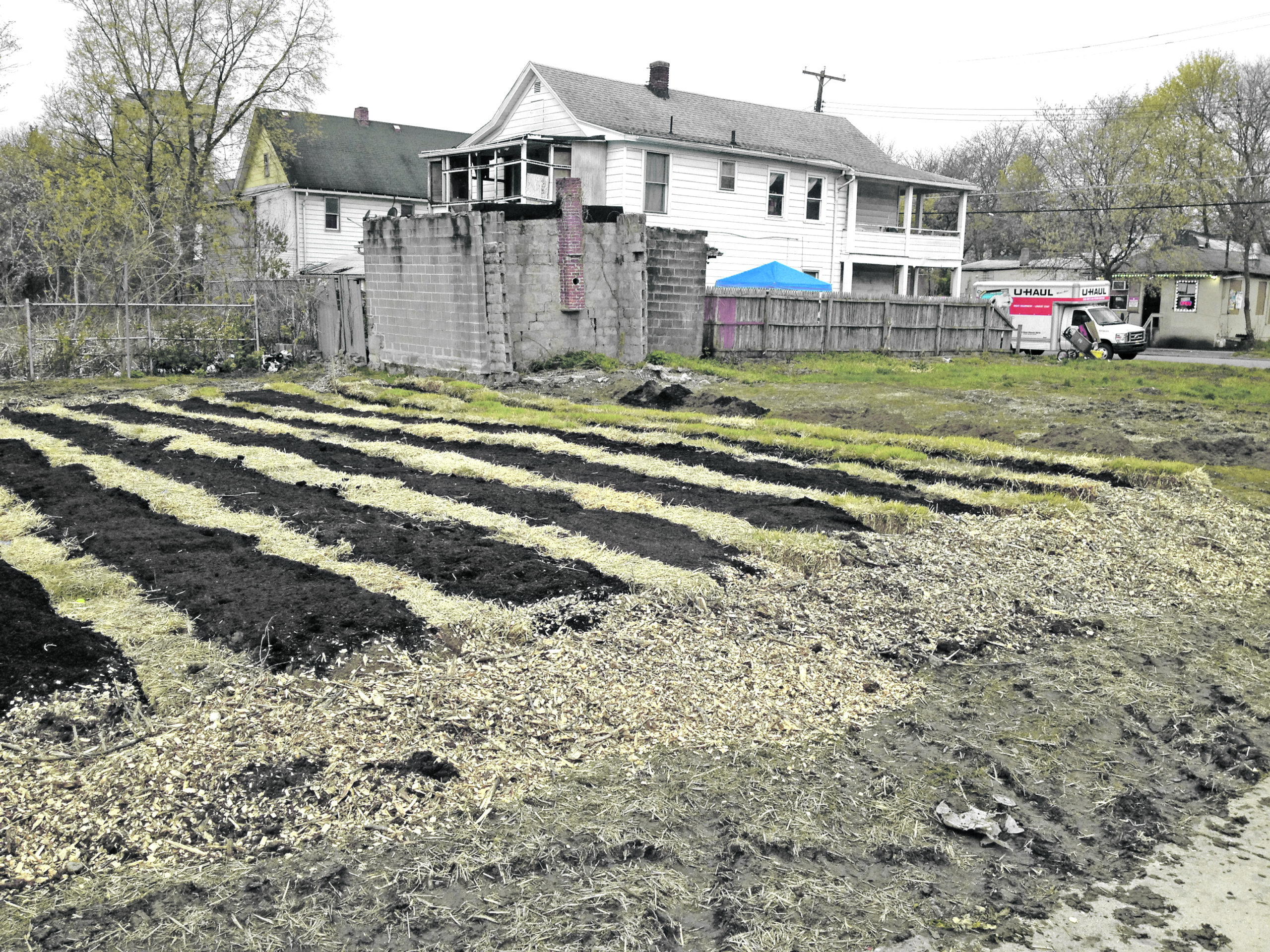 Completed straw bale beds with wood chip ramps at the end to create an easy slope up. Most bales were not seed free and barley germinated the first year on top of the straw bales. This was controlled with a weed eater in 2019, but winter killed and not an issue in 2020.
Courtesy of Kyle Rittenburg

As we all know, a robust regional food system is an important step toward becoming a more sustainable and equitable society. While rural agriculture is the backbone of a regional food system, farming in the urban environment is a useful tool in closing some of the gaps in this vision of local food. Many cities have vacant or underutilized land that can become productive space and help create a net positive impact on the local ecosystem and diet as well as the way agriculture is viewed by urban dwellers.

The Binghamton Urban Farm (BUF) is one such example of food production on marginal land based in the downtown district of Binghamton, NY. BUF is run by the nonprofit organization Volunteers Improving Neighborhood Environments (VINES). VINES manages a number of other programs in the Binghamton area, including community gardens, an educational work program for high school students called Grow Binghamton, and a farm share program that distributes over 200 CSA shares from the urban farm and two other local farms to city residents.

The story of BUF starts back in 2009 on two small city lots with a 30-by-72-foot hoop house and a small growing field of approximately 6,000 square feet. Over the years the farm has grown to encompass 15 city lots that make up almost 2.25 acres. The largest and most recent expansion occurred after the flooding of Tropical Storm Lee in 2011. Lee dropped near 12 inches of rain along the Susquehanna and Chenango river valleys, causing a massive amount of flooding damage in the Southern Tier. The downtown Binghamton area, which is located at the confluence of these two rivers, saw record flooding amounts that inundated BUF and the surrounding houses with almost five feet of water. Tropical Storm Lee precipitated many changes and adaptations in Broome County, including a number of FEMA buyouts. One of these buyouts was targeted in the neighborhood of the urban farm. The landowners were offered fair market value for their houses and properties, but a few neighbors opted to not sell. Ultimately, 10 houses were taken down by the city in the vicinity of the farm. These lots were added to the lease agreement that VINES maintains with the City of Binghamton, and in 2019 we began the process of turning them into productive farmland.

When a house is taken down all of the above ground portions are taken to the landfill. What’s left is the concrete foundation and the basement. A bulldozer is used to scrape all of the topsoil on the lot into the basement, and then it’s required that at least four inches of clean topsoil are added back on top of the lot. Topsoil is a strong word here, and in the case of the urban farm what was left was a compact gravelly base that drained poorly and had very little opportunity for roots to penetrate. We needed not only fertility and organic matter, but the soil itself. Summer squash growing in the straw bale beds in 2020. The bales have noticeably settled and begun to decay. The beds were covered with a silage tarp for three weeks after the summer squash was mown down. Wood chips were added on top of the bales and garlic was planted here in October.
Courtesy of Kyle Rittenburg

After brainstorming many different creative solutions, we came up with a unique idea to maximize organic matter and minimize our imported topsoil. What ended up being created is a type of “hugelkultur.” Traditionally, hugelkultur (a German word meaning “mound culture” or “hill culture”) is a method or style of gardening and soil building where large pieces of wood are buried under a layer of topsoil to create a natural mound, similar to what you might see in an old growth forest, when a large tree is left to decay on the forest floor. As the wood slowly decomposes it acts as a water and nutrient sponge, feeding the soil and the plants growing in it. Our hugelkultur differed in the fact that we used wood chips instead of logs and we incorporated straw bales in between our production beds. The straw bales acted as our walking paths as well as contained the wood chips and the topsoil mix.

Thanks to a SARE-funded grant from the USDA, we were able to explore this idea by constructing two fields and performing a comparative yield analysis of our straw bale hugelkultur beds to that of a newly created field with only topsoil and compost added. In November 2018 the houses came down. By January 2019, we had laid out 10 inches of a topsoil and compost mix on a 3,000-square-foot field which was to be our control plot. The topsoil for all of our fields came from a large quarry on the banks of the Susquehanna near Owego, and the compost all came from a facility in Trumansburg, NY. In April 2019 we started laying out our first strawbale bed. Bales were laid end to end in two 50-foot rows, 34 inches apart. Using a bucket loader, wood chips were piled roughly six to eight inches deep in between the bales, followed by six inches of a topsoil and a compost blend mixed at the same ratio as our control field. We continued laying out straw bales, woodchips, and soil one bed at a time until we had a total of 24 straw bale beds.

By the second week of May 2019, our two different fields had been planted. Leaf lettuce and cucumbers were planted on the same dates in both fields to compare the growth of these two crops in both fields. The leaf lettuce, which was Johnny’s Selected Seeds All-Star lettuce mix, was harvested four times from each bed using a cut-and-come-again technique. The cucumbers were Marketmore 76 and were harvested a total of 10 times over the course of about six weeks. A noticeable difference was found in the cucumber production between the two fields. The straw bale field yielded a total of 182.3 pounds of cucumbers, while our control field yielded only 83 pounds. The leaf lettuce yields were much more similar at 30.7 pounds in the straw bale beds and 32.6 pounds in the control. It’s difficult to say whether it was the quality of the soil and field construction or if it was other growing factors that had the greatest impact, such as the amount of sunlight they received. Our control field is located near a small woodlot and gets shade in the early morning, while the straw bale field has full sun most of the day.

Other differences were noted in these two fields during that first year as well as for the 2020 growing season. The woodchips buried under the topsoil in our straw bale beds created excellent drainage. During a heavy rain event our control field would quickly puddle and have very poor percolation rates due to the limited amount of topsoil and the hard pan underneath. In 2020 this was partially alleviated by creating raised beds with a rotary plow, but the drainage on our straw bale beds continued to be excellent without any soil work needed. This excellent drainage was a double-edged sword, though. During times of drought the straw bale beds were the first to show signs of water stress and required irrigation more often, which ran counter to the theories of hugelkultur (possibly a difference between woodchips and logs). Finally, the straw bale beds were much more pleasant to work in. After surveying volunteers and youth employees, most individuals found the soft straw bales easy to kneel on, and after a few months they settled a few inches, creating a nice, rounded raised bed that was easier to weed and harvest. A few individuals did mention the uneven footing as a hazard, as some bales decayed and settled at different rates.

Near the end of the 2020 growing season, we began adding wood chips on top of the straw bale walking paths. Some of the bales had decayed and sunk down six or more inches, and the woodchip top layer brought the path up to a more level height with the beds themselves. These beds will be managed as permanent raised beds from now on. In the long term this will hopefully allow for healthier soil and plants, but in the short term there is a trade off with a lack of flexibility. Our control field has room for the planting beds to shift if needed, but the straw bale beds are rigid and fixed at 34 inches wide. This also forces a certain type of management regime which includes many no-till techniques. The beds were designed for our BCS walk-behind tractor to fit down them, but when attempting to seed and till in a cover crop such as winter rye, it is inevitable that some seed ends up in the paths and is difficult to till under in the spring. For this purpose, a large silage tarp was purchased and used with great success in the 2020 season. With a little extra planning this tarp is extremely effective at managing cover crops and weeds alike.

After managing these experimental beds for two seasons we have learned a lot about building soil from scratch. In the future I would omit the straw bales and simply layer a thick mat of wood chips, followed by soil and compost on top. This would give the benefit of good drainage while minimizing the costs and labor of construction, the lack of flexible bed layout, and the ease of management in general.

Kyle Rittenburg is the former manager of the Binghamton Urban Farm and can be reached at klrittenburg@gmail.com.
Posted in Small Farms Quarterly, Urban Ag
Scroll To Top