Home » Posts » Don’t Judge a Carrot by the Cover

Don’t Judge a Carrot by the Cover

At first glance, the “Dulcinea” is simply a carrot. But this new variety is so much more, and could outlast us by countless generations. 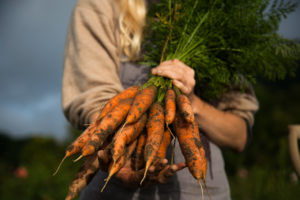 Fruition Seeds is excited to share Dulcinea with the world, and are equally ecstatic to continue intensive selections with each generation. Petra Page-Mann / Fruition Seeds

Don’t judge a book by its cover … or a carrot, either.

Dulcinea is a new carrot variety, the collaborative vision of a farmer, public plant breeder, a seed company and countless eaters along the way, though I must warn you: She is orange, long and tapered. At first glance, she is simply a carrot. But she’s so much more. And if we’ve done our work well, Dulcinea will outlast us by countless generations.

The Ground Beneath Our Feet

But most varieties are anonymous in our gardens and at the grocery store, the nameless commodity that fits our quintessential assumption of what is romaine lettuce, what is an onion. This is basil, this is butternut squash. There are hundreds of varieties any carrot could be, but many of us simply recognize it as a carrot. Nonetheless, every carrot has a name.

You may not have heard of ‘Bolero’ carrot before, but you’ve most likely eaten it many times. Bolero is classic orange, long and tapered — yes, it’s a carrot. What makes it special is this: super vigorous with strong tops, it’s ideal for mechanical harvest and thus is grown on thousands of acres across the world, in conventional and organic fields alike.

Bolero is a highly patented F1 Hybrid which tens of thousands of farmers must purchase seed each season.

And Friends, Bolero is not the most delicious carrot you’ve ever tasted, but that’s not the point. Our industrial culture has prioritized financial profit over every other metric for generations.

Slowly we are elevating flavor, organics and intellectual respect beyond patenting as an equal measure of value.

At first glance, it’s true: Dulcinea looks like just another nantes-style market carrot. But she is so much more.

Let’s begin at the beginning.

Nathaniel Thompson of Remembrance Farm grows several dozen acres of biodynamic vegetables in the Finger Lakes of New York, including about 5 acres of carrots each season largely for his winter CSA. Over the years he has trialed dozens upon dozens of varieties, hunting for that holy grail of vigor, storage and sweetness. He has found few that compare to Bolero, especially in the vigor department, which makes all the difference, especially at scale. 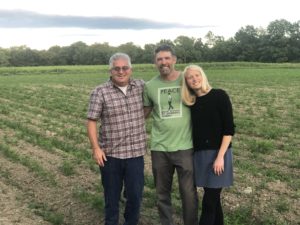 “Even after years of trials, my biodynamic farm is still dependent on this conventional, hybrid seed,” explained Nathaniel. And he isn’t alone. Bolero is grown on tens of thousands of acres around the world, in both conventional and organic fields alike. In 2015, the French multinational breeding company Vilmorin, who bred and produces Bolero, announced it would never be releasing the F1 as organic seed. “After years, I was finally going crazy.”

Nathaniel approached us here at Fruition Seeds. We focus on regionally adaptation as well as organics and we love to collaborate broadly with all stakeholders in the food system, from farmers to universities to food banks and everything in between. We had helped Nathaniel develop select strains of hyper-petaled, super colorful calendula for his salad mixes and a super-frilled, cold-tolerant Red Russian kale to increase his production in both spring and fall. Could we de-hybridize Bolero, as well?

That day Nathaniel asked us to de-hybridize Bolero, we realized we were in over our heads. Carrots are prone to such inbreeding depression and, since they cross so readily with Queen Anne’s Lace and are difficult to produce well in isolation cages, they’re challenging to grow to seed here in the Northeast. We immediately turned to our dear friend and mentor Irwin Goldman, a public plant breeder at the University of Wisconsin, Madison who specializes in carrots.

Irwin jumped in right away.

Instrumental in founding the Open Source Seed Initiative (OSSI), Irwin shared his insight that since Bolero’s parent lines were likely so inbred that it would be counter-productive to simply ‘de-hybridize’ Bolero. ‘Crossing Bolero with OSSI’s nantes-style carrot population was an elegant solution,’ shared Irwin, ‘combining the specificity of Bolero with the broader but still desirable genetics of a healthy nantes population makes a much more resilient carrot.’

That winter, Irwin crossed several Bolero carrots into the OSSI nantes population and sent Fruition the seed the following season, beginning a cycle we would follow for four years to come. The seed was sown at Remembrance Farm, with agronomic selections made at harvest. We selected each root for classic nantes shape as well as early, abundant leaf production, providing early vigor and early maturity as well as machine harvest. Once we stored the roots 3 months (the optimum minimum vernalization period for carrot), we made taste/texture selections and sent them to Irwin, who planted them in his glass houses to produce seed over the winter. Irwin’s immense generosity and expertise allowed this biennial crop to be produced annually.

This growth-selection-production cycle continued for five carrot generations over six years, each season refining our process.

There was much to select for! Within the context of Nathaniel’s biodynamic farm, we selected this new variety specifically for flavor, storage and early, vigorous leaf production.

The flavor selections we made were immensely illuminating. I had read that carrots quickly revert back to their bitter ancestry and tasting this ancestry in all her pine-y, resinous intensity was SO eye-opening. Not often, but at first perhaps every one in eighty or so carrots would have a distinct and unmistakable pinesol-esque quality. With selection, the proportion decreased. Still, with every generation, we are making flavor selections. And it’s paid off: Already, Dulcinea is much sweeter and tender than Bolero. 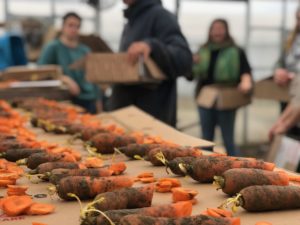 Carrots quickly revert back to their bitter, pinesol-esque ancestry, so we taste each of the ~1000 roots before they are planted to grow the next generation of Dulcinea. Petra Page-Mann / Fruition Seeds

As we made flavor selections, we had three bins: One labeled heaven, another hell and the third one was purgatory. As much as I love flavor wheels and nuance, we were tasting hundreds of roots and had to keep it simple! Delicious ones went to heaven and bitter ones went to hell. Purgatory was of course in the middle and most of them became soup: We only circled back to ‘purgatory’ if we needed more roots to ensure we had a healthy population size (200 roots), to avoid any risk of inbreeding depression.

By our third generation, we already had a more consistently sweet root than Bolero, perhaps not surprisingly since most commercial varieties prioritize every other ‘market’ quality above flavor itself.

Selecting for long-term storage was also straight-forward: Nantes as a market class is long-keeping and maintain excellent flavor. Now that we’re saving 1000+ roots for seed each generation, we’re growing them in the field rather than Irwin’s glasshouses. Though it’s turned our annual cycle into a true biennial cycle once more, this only increases the significance of our storage and flavor selections.

The greatest challenge for us has been selecting for that early, vigorous leaf production that is so much the hallmark of Bolero. At first, we attempted selections by flagging vigorous individuals in the field six weeks after planting. The time invested did not prove fruitful, so we next made vigor selections by simply making a visual evaluation at harvest. Our observations suggest that early, vigorous leaf production may be indicated by above-average leaves present at harvest. Each generation has been improving, though this is by far the trait we’ve seen the least of in the population, making it slower to make more consistent.

In 2018, Remembrance Farm grew 2 acres of this new carrot and 3 acres in 2019, a testament to the quality and reliability of this new variety. With increased population sizes in the field, we’re able to grow increased populations sizes for seed. Production will increase in 2020 and if seed production continues to thrive, Remembrance plans to grow this new carrot exclusively in 2021.

Dulcinea is available on Fruition Seeds’ website, www.fruitionseeds.com, and if you’re interested in larger quantities, simply send us an email, petra@fruitionseeds.com.

A version of this article was printed in Natural Farmer last summer, and can also be found on the Fruition Seeds blog.

Growing up in her father’s garden in the Finger Lakes of New York, Petra believes each seed and each of us is in the world to change the world. In 2012 she founded Fruition Seeds to share the seeds, knowledge and inspiration gardeners need to be more successful in the Northeast.  Don’t hesitate to strike up a conversation by contacting her at petra@fruitionseeds.com
Posted in Small Farms Quarterly
Scroll To Top