The last five years have been challenging for onion growers in New York State, as a fungus has caused premature leaf death on onions in the field. 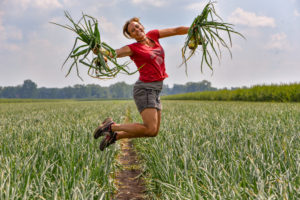 More than 75% of growers in the state have been affected by Stemphylium leaf blight (SLB), an old disease which has re-emerged and become prevalent after an increase in fungicide resistance according to Cornell. Growers began calling Cornell Cooperative Extension (CCE) specialists for support, after noticing leaf rot and smaller bulbs.

Matt Mortellaro, onion farmer and co-owner of G. Mortellaro & Sons in Elba, New York, said how important the support from CCE has been to his farm.

“Christy and her colleagues have been instrumental in helping us determine what concentrations are still effective,” Mortellaro told CALS.

Growers statewide have been creating guidelines for fungicide rotation and strategic application to attack SLB. Meanwhile, researchers are working to develop genetic and molecular markers and tools to more quickly detect fungicide resistance in the future.

Learn more about the efforts to combat Stemphylium leaf blight in the onion industry in CALS online news.

Kelsie is from southwest Missouri and grew up on a 150-acre farm helping her family buy and sell horses and cattle. She credits FFA for finding her passion for agriculture and food issues and desiring a career as an “agvocate.” Since coming to Cornell, she has gained interest in local production, global food issues, and environmental impacts of and on agriculture. She joined the Cornell Small Farms Program in May of 2018 and is excited to gain experience to complement coursework in the Agricultural Sciences major and Communication major.
Posted in News and Updates, Vegetables
Scroll To Top