Grazing Goats with Your Flock of Sheep

The benefits of keeping Kiko goats with sheep. 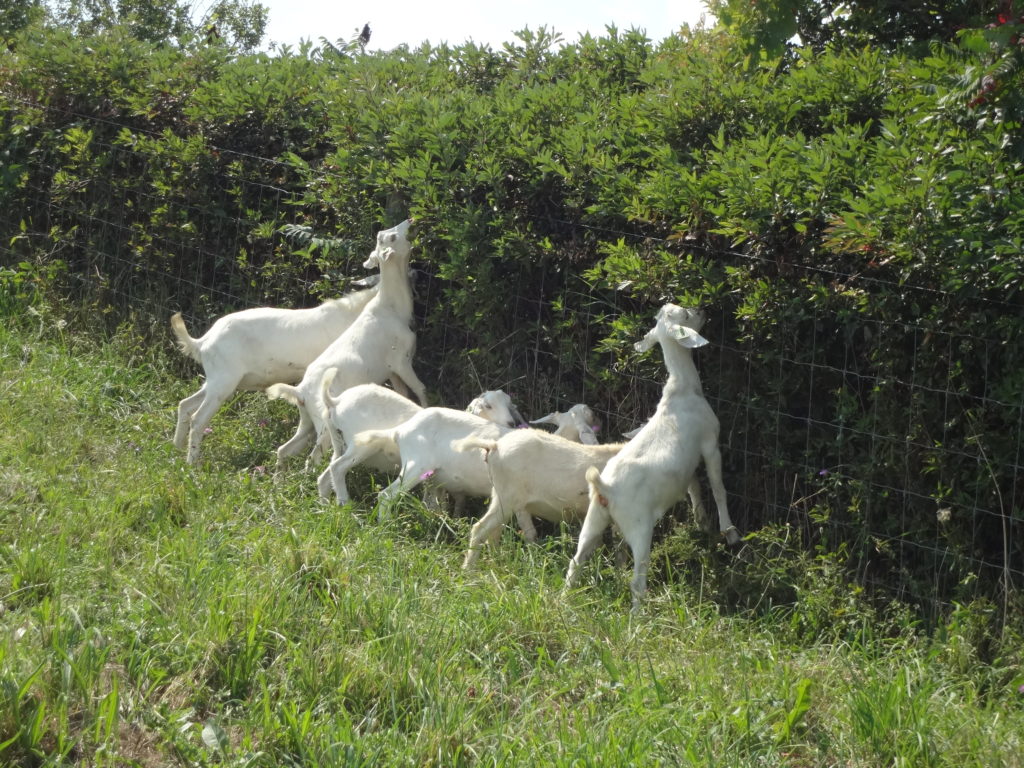 People who pass by my farm are often surprised to see goats in my flock of White Dorper sheep. “Why do you have goats?” they most often ask, if they can spot them.

So, why do I have goats? Goats have a different grazing behavior than sheep. They prefer coarser plants. They love to browse. Browsing means that these goats like to feed on higher growing vegetation, like leaves of trees and bushes, vines, and tall-growing weeds. I live in an area where feral vines are growing abundantly.

What is the cause for so many feral vines? The many vineyards in the Finger Lakes region of New York supply plentiful bird food in the form of grapes. The seeds that these birds deposit wherever they perch cause these vines to grow in great numbers. My perimeter woven wire fence includes a hot wire on top, powered by a plug-in unit in the barn. When I attach my temporary electric nettings anywhere on the farm, I can electrify it by attaching a power link to the nettings and this hot wire. A few years after the woven wire fence was erected, these feral vines had grown so abandonly on the fence that they started choking out the electricity by touching the upper hot strand. That was particularly true after a rain, as the voltage dropped by several thousand volts when the wet vines leaned on the hot wire. Manual removal of the vines proved cumbersome and time consuming. My White Dorper sheep, known for being good browsers compared to other sheep breeds, wouldn’t keep up with keeping the vines at bay. Spraying herbicides is an option to control weeds, but I don’t use herbicides anywhere on the farm. I had to find a different solution.

I was long familiar with the grazing and browsing behavior of goats. When I tended sheep in the mountains in Germany in the 1990s under the transhumance system, goats were used in flocks of sheep to help eliminate brush and weeds in open pastures. In addition, I owned Boer goats when I farmed in New Jersey. My knowledge of goats also meant that I was aware of the wide range of available goats, and how sensitive some goat breeds can be to hot and cold weather as well as rain. Most dairy goats fall into this category of sensitive breeds. They do a fine job if they have access to a barn whenever they want. However, I needed a hardier breed of goats. Besides dairy goats, I also ruled out Boer goats. While they are by far the meatiest goats there are, they too have a sensitivity level that limited their use for my purposes. I had heard of Kiko goats, a breed that originated in New Zealand from feral goats. “Kiko“ means meat in the language of indigenous people in New Zealand. The feral origin suggested hardiness, and the name suggested meatiness, so I wanted to give Kiko goats a try.

I purchased 15 doelings and two unrelated bucklings over the course of two years and put them to work. I opted for dehorned goats. This way they would be able to reach through the woven wire fence without getting stuck. Dehorned goats are also easier to manage together with sheep when they are kept in the barn in the winter months or at lambing season, since goats can be very protective of their feed at a hay feeder.

The difference in grazing behavior was apparent the moment the goats joined the flock. The feral vines were immediately sought out by the goats. Other unwanted plants, like Tartarian honeysuckle and multiflora rose bushes, the goats loved to eat to the extent that they are almost extinct on my farm. If you have a problem with poison ivy, trust goats to eliminate them. Other weedy plants were also sought out. New England asters, golden rod, and milk weed were eaten right after each pasture shift before anything else. The Canadian thistle was the one and only weed that I had hoped to eliminate that was, and continues to be, eaten only in small numbers.

The hardiness of this goat breed proved far superior to any other goat breed I had experienced. My Kiko goats deal with hot weather even better than my relatively heat-tolerant White Dorper sheep. While my sheep seek shade in weather well above 80 degrees, my goats rarely do. The mohair goat influence of the Kiko goat’s ancestors has them grow such a thick coat in the winter that they are almost as winter hardy as my sheep. The meatiness does not rival Boer goats, however, Kiko goats are meatier than all other goat breeds I know.

If you consider goats, you need to be aware that they are more likely to find a hole or gap in the fence, and are prone to jump over a panel of the chute or pen or desire to jump on top of the hay feeder and even bed there. A goat buck is more capable of jumping a fence than a ram when breeding season arrives. This can be quite a nuisance at times, and annoying as well. Goats are also more susceptible to internal parasites than sheep. Particularly, the deadly barber pole worm can raise havoc among goats, especially when they are forced to graze and are deprived of opportunities to browse. The ability to browse is essential for good goat health. It does not mean though that these goats will never graze and will never compete with the sheep. They like grass and clover, too!

If any of the behaviors or characteristics of goats are a problem for you, or if your fences are in disrepair, I suggest you stay away from raising goats. However, if your weed load is going beyond what you wish to manage manually and the use of herbicides is as undesirable to you as it is to me, consider some Kiko goats. And when they annoy you from time to time, remember that I said they would. A goat will always be a goat, no matter the breed. Their ability to keep many weeds on my farm in check had me make peace with the annoying sides of their behavior. Kind of.