What do Silicon Valley and farmers have in common? Apples.

Recently, hosts of Cornell Cooperative Extension’s (CCE) podcast Extension Out Loud were joined by Mario Miranda Sazo at this year’s annual Empire Farm Days to delve into digital agriculture within the apple industry. 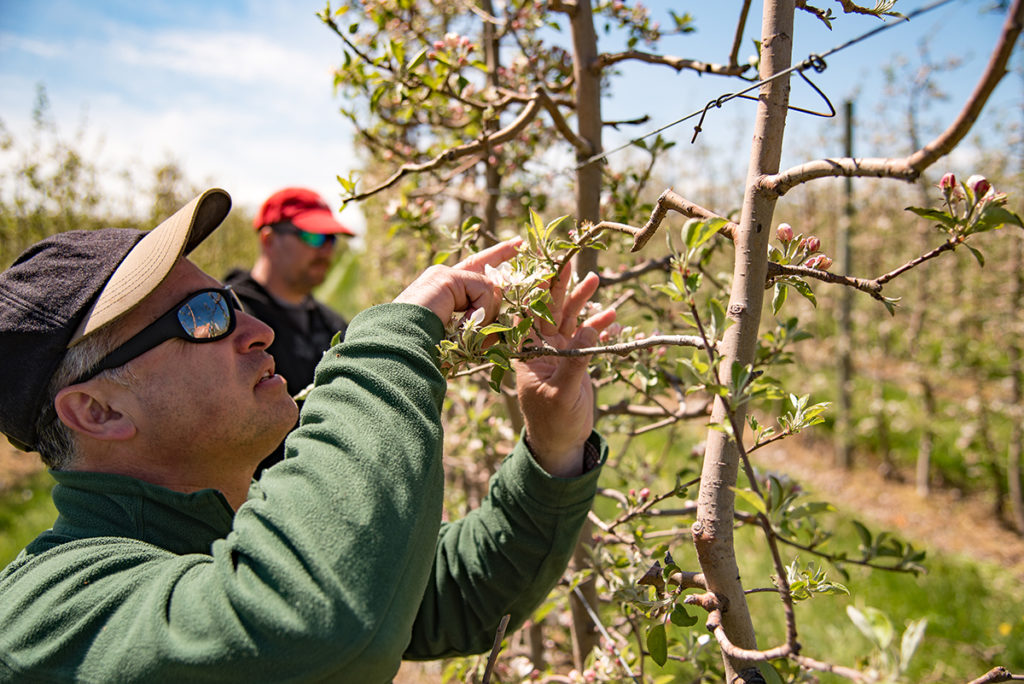 Sazo, a fruit extension specialist with CCE’s Lake Ontario Fruit Program, explained that around 30 to 40 years ago, producers were planting at a density of 100 trees per acre. Today, producers are planting 900 to 2,000 trees per acre, thanks to dwarfing rootstocks — many of which were developed at Cornell Agritech Research Station. Sazo explains the shift from large, strong-rooted trees to dwarf apple trees leads to less root biomass, requiring a pole-and-wire support system. Sazo walks the listener through the different methods of growing trees by seed versus grafting — how most trees in NYS are grown. Higher density orchards grown from grafting methods have led to a need for more efficient processes: enter digital agriculture.

Last summer Sazo and other extension specialists realized they needed to bridge the gap between digital agriculture within Cornell University and through Extension.

“We have big minds at Cornell University, but we were not working together until the digital agriculture in each initiative was started on campus,” Sazo said.

A digital agriculture professional working team was then created — composed of Terry Bates, Jim Meyers, and Sazo — to think about bringing digital agriculture into NYS orchards. The team is teaching machines to recognize when the trees are in different phases of their life cycle, from recognizing a shoot to recognizing a flower, until the entirety of an orchard is digitized.

Digitalization isn’t possible without the help of engineers. Conversations are being had with organizations in Silicon Valley to help revolutionize the apple industry. Sazo recommends a podcast called “The Modern Acre” to delve deeper in the interdisciplinary connection between Silicon Valley and farmers. Sazo ends by cautioning the release of new and improved technology without new and improved training of the workforce. There is a knowledge gap that needs to be filled so the workforce can confidently operate robots and modern equipment within the industry.

To hear more of Mario Sazo’s story and the trends of the apple industry, listen to the episode online.

Kelsie is from southwest Missouri and grew up on a 150-acre farm helping her family buy and sell horses and cattle. She credits FFA for finding her passion for agriculture and food issues and desiring a career as an “agvocate.” Since coming to Cornell, she has gained interest in local production, global food issues, and environmental impacts of and on agriculture. She joined the Cornell Small Farms Program in May of 2018 and is excited to gain experience to complement coursework in the Agricultural Sciences major and Communication major.
Posted in News and Updates
Scroll To Top