High in the branches of a maple tree sit the tattered remains of a muddy, grassy bird nest. I train my binoculars on the small lump, but it was built the previous year and is very much empty. Closer to eye level, it’s harder to miss the metal spigot and tangle of blue tubing attached to the tree’s trunk like an IV drip. This tree is one of the 6,000 tapped for Cornell University’s signature maple syrup, and last year it also raised a family of birds.

Birds and maple syrup share the same critical ingredient: healthy northeastern forests. Every year, millions of birds breed, feed, and fledge in the same forests that are tapped for syrup (called “sugar bushes”). As long as a sugar bush stays tapped, it will remain a forest and not be cleared for development.

Since 2014, Audubon Vermont has worked with nearly 40 maple syrup pro­ducers in the Green Mountain State on the Bird-Friendly Maple Project to help sugar bushes meet their full potential for bird habitat. Now the Cornell Lab of Ornithology is partnering with the Cornell Maple Program to sweeten the deal for both birds and the bottom line in the university’s own sugar bush.

From Maple Monocultures to Bird-Friendly Forests

Maple-syrup producers exert consider­able control over how the habitat looks in a sugar bush. At the same time, what is good for birds in a forest is also good for maple producers in the long run: the health and sustainability of the crop.

The understory of the oldest part of the Arnot sugar bush was thinned de­cades ago and deer have kept the shrub layer from regenerating, explains Wight­man as we walk through the Cornell research forest on a delicately sunlit May morning. Here, slender maples tower over us like an arched cathedral ceiling; tiny beech and hornbeam seedlings pop out of the leaf litter—but there is nothing but empty space between the canopy and forest floor. 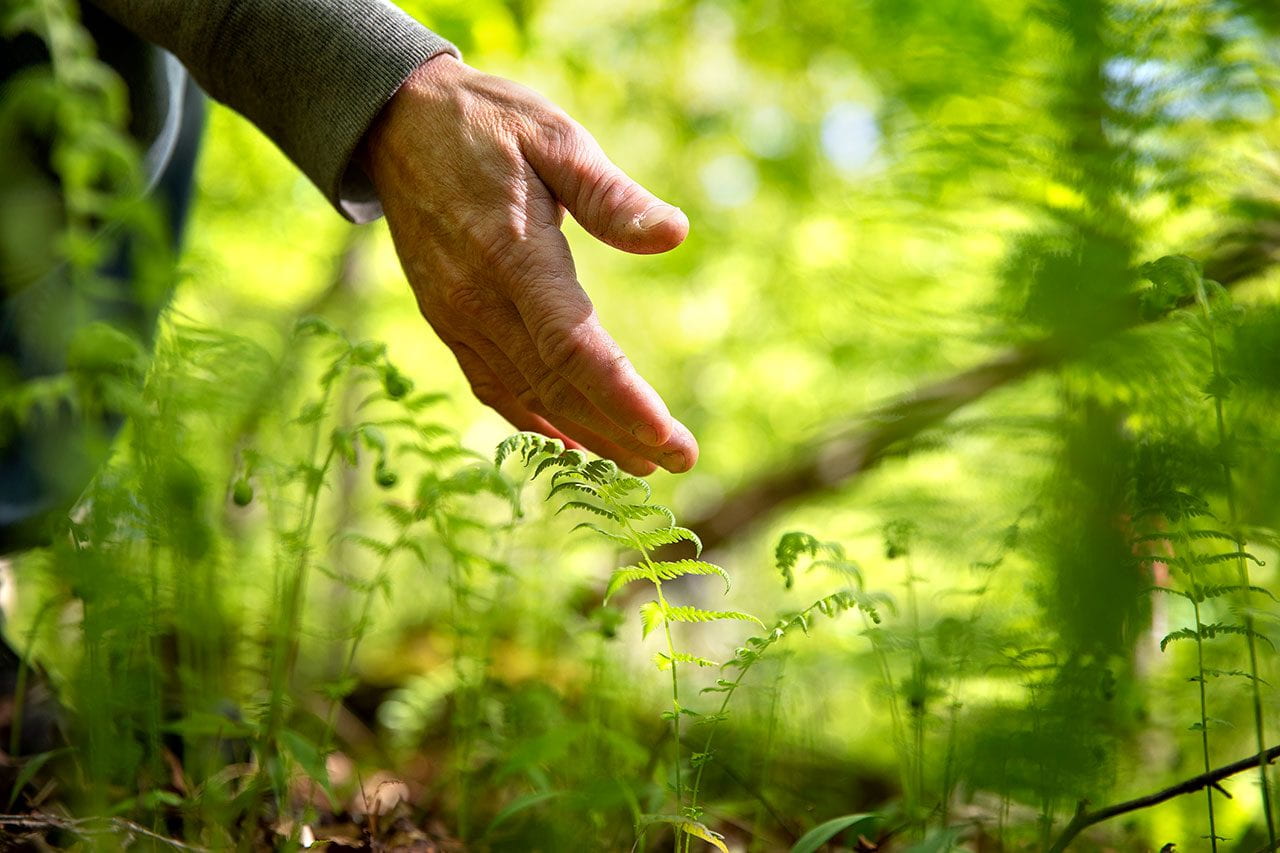 Ideally, forest managers aim for a diversity of tree species at a diversity of ages, with layers of branches and leaves at the top, middle, and bottom. Without younger generations of trees growing up underneath the canopy layer, the entire forest community faces an abrupt decline when all those oldest-generation trees begin to die.

Birds suffer, too, from a lack of diver­sity in sugar-bush habitat. For example, without a conifer component among the maple trees, birds like the Blue-headed Vireo, Blackburnian Warbler, and Sharp-shinned Hawk are missing valuable nesting habitat. Fruiting trees and shrubs in a sugar bush, like black cherry, also provide critical energy sup­plies for birds fueling up for migration.

Next to the monoculture in Arnot Forest stands a plot that is a perfect model for bird-friendly management. The bright blue tubing disappears and reappears among the thick understory, winding around a few snags with holes drilled out by woodpeckers. There are more than just maples here; we stop to admire a Black-throated Green Warbler flitting around in a hemlock, and a Scarlet Tanager in an oak tree.

Conservation biologist Steve Hagen­buch, who heads up Audubon Vermont’s Bird-Friendly Maple Project, says sugar bushes that contain at least 25 percent nonmaple trees support a greater diver­sity and abundance of birds than stands growing only maples. And he says syrup producers in the Audubon Vermont program are finding that managing a sugar bush for tree diversity is good for sugaring sustainability, too. A University of Vermont study found that sugar bushes with a bird-friendly ratio of tree diversity experienced insect outbreaks that were significantly shorter and less intense than in maple monocultures.

“Is that a coincidence?” Hagenbuch asks rhetorically. “I don’t think so. I think that speaks to a healthy, functioning forest, thanks to its structure and composition.”

Bringing Back the Forest for Birds

By the barrel, syrup costs more than oil. Products like maple-derived alcohol, candies, and even sports drinks have exploded in popularity. New York alone taps over 2 million trees, and its maple products were worth over 30 million dollars last year. 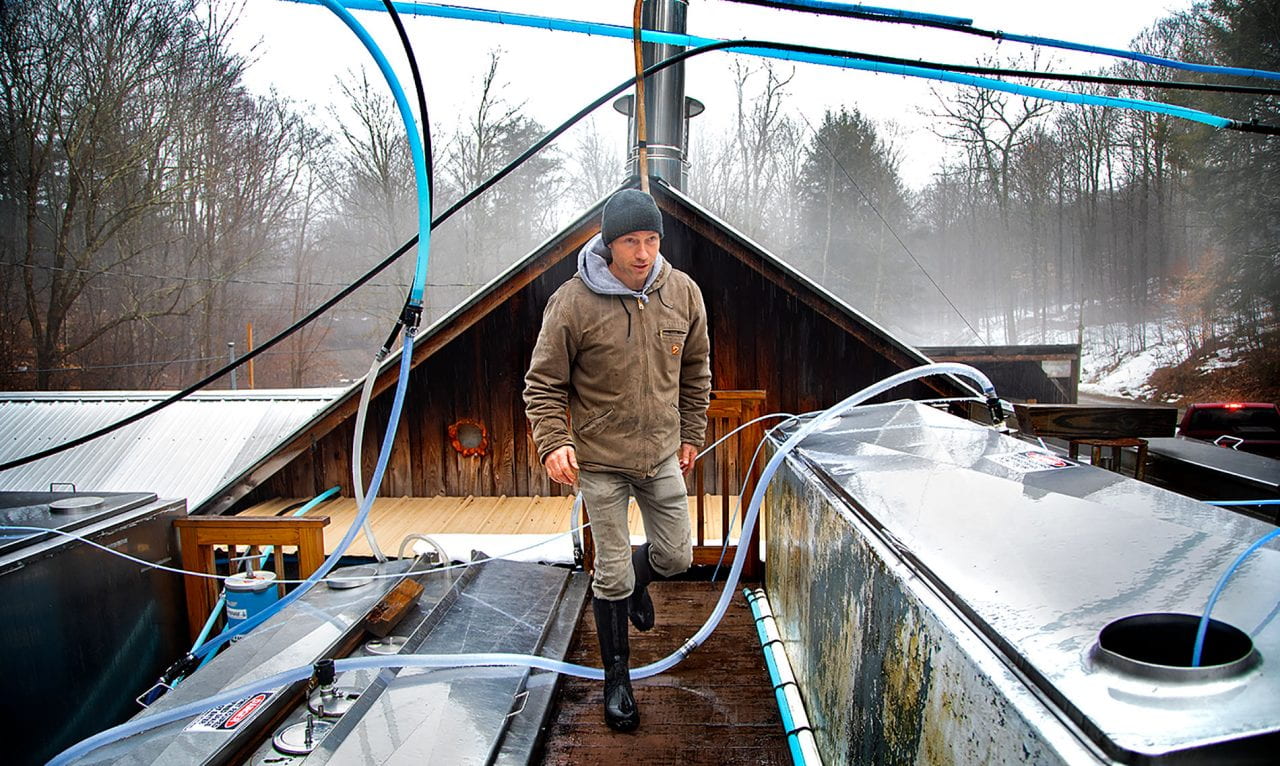 Aaron Wightman, operations manager at the Arnot Research Sugarbush, oversees a network of taps and tubing that draws sap from more than 6,000 maple trees. Wightman’s goal is to diversify the tree species within the sugar bush to include more than just maples and create a healthier forest. Courtesy of Jason Koski / Cornell Brand Communications.

But the boom in sugar bushes, as an­other form of farming monoculture, is compounding a tree diversity problem in the Northeast’s forests.

Throughout the 1800s, settlers cleared nearly 90 percent of all forests in the Northeast for farmland, only to suffer season after season of poor yields in their harvests. After the settlers abandoned their farmland, the forests began to grow back. But wave after wave of invasive species, forest pests, and diseases stunted the growth of young trees, leaving many forests lacking in successive generations of native trees. The irony, noted in the 2016 State of the Birds Report, is this: “In the East, there is more forest today than there was 100 years ago, yet forest stands lack the diversity of young and old trees that makes for prime bird habitat.”

With habitat loss and degradation looming as the greatest threats to birds today, sugar bushes have the potential to offer a big conservation footprint for birds.

“Conservation of anything…birds, habitat, anything…requires an all-hands-on-deck approach,” Hagenbuch says. “We can’t rely on protected areas, or even the goodwill of people interested in wildlife. We need to integrate [bird conservation] into our businesses, create financial incentives, and encourage people to think about the role that their land management has in conservation.”

Bird-friendly maple syrup is only one part of how the food production systems of modern society can help address the massive loss of bird habitat. After all, the very same Scarlet Tanagers that spend summer in sugar bushes in New York, Vermont, and Quebec fly to South America for the winter, where they may look for habitat among shade-grown coffee farms in Colombia. Ultimately, Wightman hopes the sugar bush in Arnot Forest will be a model for bird-friendly maple production in New York, and for the international importance of sustainable food production.

“Any healthy forest has a healthy bird population,” he says. “That’s how we should grow all our food.”

This story was originally published in the spring 2019 issue of Living Bird magazine (www.livingbird.org), produced by the Cornell Lab of Ornithology.

Alison Haigh is a senior Environmental Science major at Cornell University and freelance writer based in Ithaca, N.Y.
Posted in Uncategorized