On-Farm Plant Breeding Pt. I: Getting Started with Diversity

Learn how to get started with your own on-farm plant breeding project.

Often as growers we rely on our favorite seed companies to provide us with the varieties we grow. This strategy usually works well, and there are a lot of great varieties out there both new and old. However, by their nature most modern commercial varieties (we will focus on vegetables, but this applies to other crops too) were developed to perform well across as broad a geographic area as possible, with a focus on the major commercial production regions for that crop. These varieties may not perform so well in non-target climates.

Breeding investment also tends to focus on the most commonly grown crops, so if there is an obscure crop that’s important on your farm (i.e. ground cherries or watermelon radish), odds are the commercially available options will be more limited — and the opportunity will be ripe for an on-farm plant breeding project. Major seed corporations also emphasize hybrid varieties in some crops, which are much more expensive and must be re-purchased every season.

Also, modern varieties are almost exclusively bred in conventional systems where synthetic fertilizer, abundant water and at least some chemical controls were used. Because environmental conditions on organic farms tend to be very different in terms of nutrient availability, weed competition and other stressors, organic growers especially find that conventionally bred varieties don’t perform as well or as reliably on their farms.

All of these factors are common reasons that farmers and gardeners decide to try their hand at plant breeding. Plant breeding on the farm allows us to develop varieties that fit our specific farm environments, with the traits that we most value. However as useful as that can be to our business, it’s also important to realize that plant breeding is a long-term endeavor and takes additional time and attention in the growing season, so it’s probably going to be hard to sustain unless it’s an activity that you feel curious and passionate about.

The best plant breeding projects arise when you are already familiar with a crop, the traits that are important (at least to you) for that crop, and different varieties that are available. Unless you already have that familiarity, it’s worthwhile to spend some time trialing varieties and observing them closely. Through that process you often will notice interesting differences or traits that might spark an idea: “I love the fruit quality of this winter squash, but I’d prefer a bush growth habit,” etc.

It might already be clear to you that an important part of plant breeding is seed-saving! Saving seeds from crops to replant the following year used to be a part of every farm, but it’s much less common now. Some crops are very easy to grow seed for — if you are a bean or corn grower, you already are a seed grower. Other annual fruiting crops, like tomatoes, squash and peppers, are quite straightforward. Some crops, such as kale, beets and carrots, are biennial and need more than one season to flower and produce seeds. Make sure you know what will be required in order to grow seed for the crop you want to work on and think about whether this process will realistically be able to fit into your farm systems.

The pollination strategy of your crop makes a big difference both in terms of what type of population you will be starting with, and the strategies you will use to improve it. A quick internet search will tell you whether your crop is an out-crosser (cross-pollinating) or an inbreeder (self-pollinating), if you don’t already know. Pollination strategy is a spectrum and some crops like peppers and squash often do both.

If you start with a cross-pollinated crop (i.e. corn), you can assume that plants planted near each other will freely intermate. This is helpful if you want to select within an existing variety or create a diverse population by intermating several different varieties, but it limits your ability to maintain “pure” varieties in a field without large amounts of space to isolate them. Another useful thing to look up is isolation distances for your crop — how far apart you need to plant two outcrossing plants if you don’t want them to cross. Often pollen from out-crossers is carried by wind, so distances can be large. If you have limited space, consider picking a crop that you would be comfortable with growing just one variety or population, or perhaps pick a self-pollinating crop to work on instead. Some backyard plant breeders ask to grow plots at neighbor’s properties to achieve isolation distances! 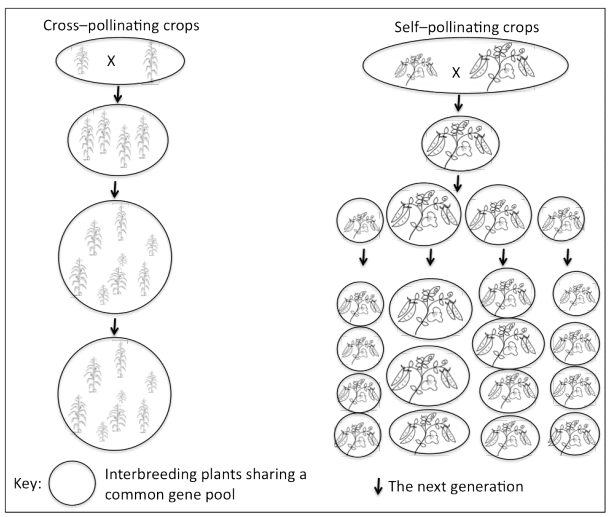 Difference in population structure of self-pollinated vs. cross-pollinated crop. Courtesy of the Organic Seed Alliance.

Highly outcrossing species also suffer from inbreeding depression, which means that if forced to self-pollinate or intermate repeatedly with very genetically similar plants, vigor and overall quality of the variety will decrease due to loss of genetic diversity (genes become more homozygous). To avoid inbreeding depression, it’s important to grow a sufficiently large number of plants in your breeding plot to maintain diversity within the crossing population. Some outcrossing species exhibit self-incompatibility, which means they can’t create viable offspring by self-pollination. This is an evolutionary strategy to ensure genetic diversity and can affect breeding approaches.

Self-pollinating crops (i.e. beans, peas) are unlikely to outcross even if grown right next to each other. That means that they will naturally form what breeders call “pure lines” — each plant self-pollinates each generation to create a very genetically uniform and true-breeding line. Plants will be homozygousfor most or all genes. Modern varieties of inbreeding crops are usually pure lines, which means they were often descended from just one high-performing plant. Older varieties such as heirlooms or landraces are less likely to have descended from a pure line, so you might see more diversity between different plants in your variety. With inbreeding crops, it is more likely that you will have to make an initial cross in order to introduce enough variation into the population to select from.

It’s important to remember that in order to achieve gain from selection (i.e. improve the performance of your variety over time), you need to start out with a genetically diverse population. In particular, you want a population that has genetic variation for the trait or traits that you are most interested in improving. This means that either you find a variety or population that already has variation within it, or you make a cross between two varieties to introduce new variation. That genetic variation is the buffet of traits that you select from throughout the project, and if most or all of your plants in a field are already genetically very similar, you won’t be able to select plants that are any better than the rest. 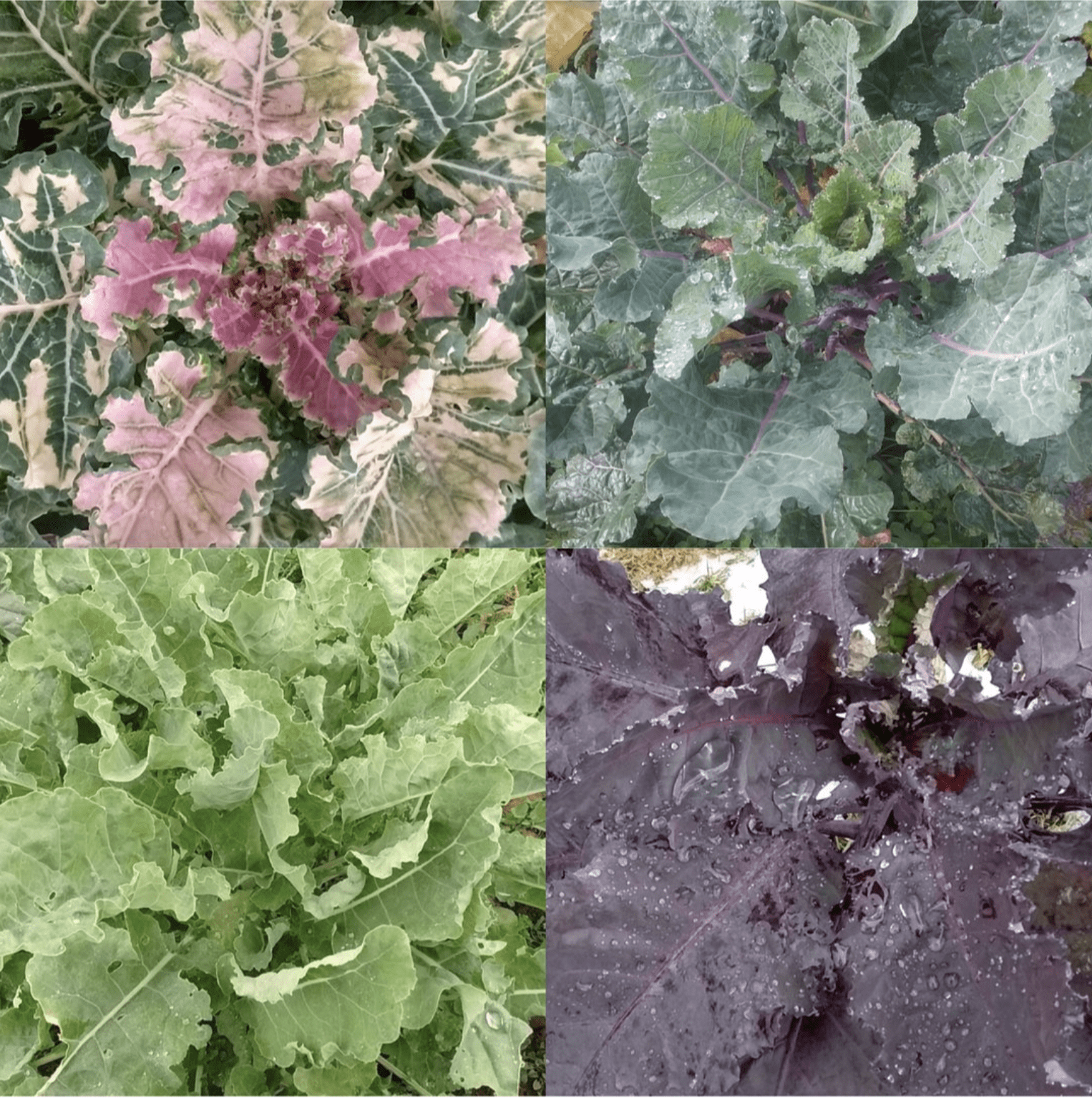 Perennial Kale Grex, an example of an initial population with high variation for numerous traits. Courtesy of the Experimental Farm Network.

One complication is that some of the variation we see between plants in the field is due to environmental effects rather than genetic differences (phenotype = genotype x environment), so in order to make sure you are looking at a genetically diverse population of plants, you will want to know something about where that population came from. You will be much more effective at selecting for traits that are highly heritable, rather than those that are more influenced by environmental conditions. In the initial vetting of parent varieties, the easiest way to determine if the variation in phenotype you see is heritable is to plant multiple replications of your variety plots.

There are several sensible starting populations for a plant breeding project on the farm.

You can use any seed to start a plant breeding project, unless there are plant patents or “bag tags” that restrict this use. Odds are you will get your parents from seed catalogs that you are already using. Other sources can be seed saver organizations, the Open Source Seed Initiative, small seed companies that often focus on unusual or regionally adapted varieties, or the USDA-ARS Germplasm Resources Information Network.

For more information on variety trialing, check out the first article in this series, “What Can Variety Trialing Do for Your Vegetable Farm?” in the Spring 2019 issue of Small Farms Quarterly.

Part two of this “On-Farm Plant Breeding” series will be on crosses and selection. Look for it in the Small Farms Quarterly Fall 2019 issue!

Kristen Loria is a Masters’ candidate in the Plant Breeding and Genetics section at Cornell University. Her own research focuses on trialing and breeding vegetable varieties for organic production systems, under the USDA NIFA-funded Northern Organic Vegetable Improvement. She is excited to be a SFQ contributor and to help grow and support a more independent, adaptive seed system for small farms. Please reach out by email: kal52@cornell.edu.
Posted in Uncategorized