How to effectively use breeding harnesses and spray paint for sheep.

A customer of mine asked me: “Do you use a breeding harness for your ram?” She did and had problems keeping it on the ram. Her question prompted me to write this article, explaining how I make certain that I know which ram breeds which ewes at what time.

Why and how is that knowledge important? One main reason is to avoid inbreeding. You don’t want a ram to breed his daughters; you want to expose them to a different ram instead. You can also greatly extend the number of years you can use a ram when he is purposefully matched with ewes unrelated to him. 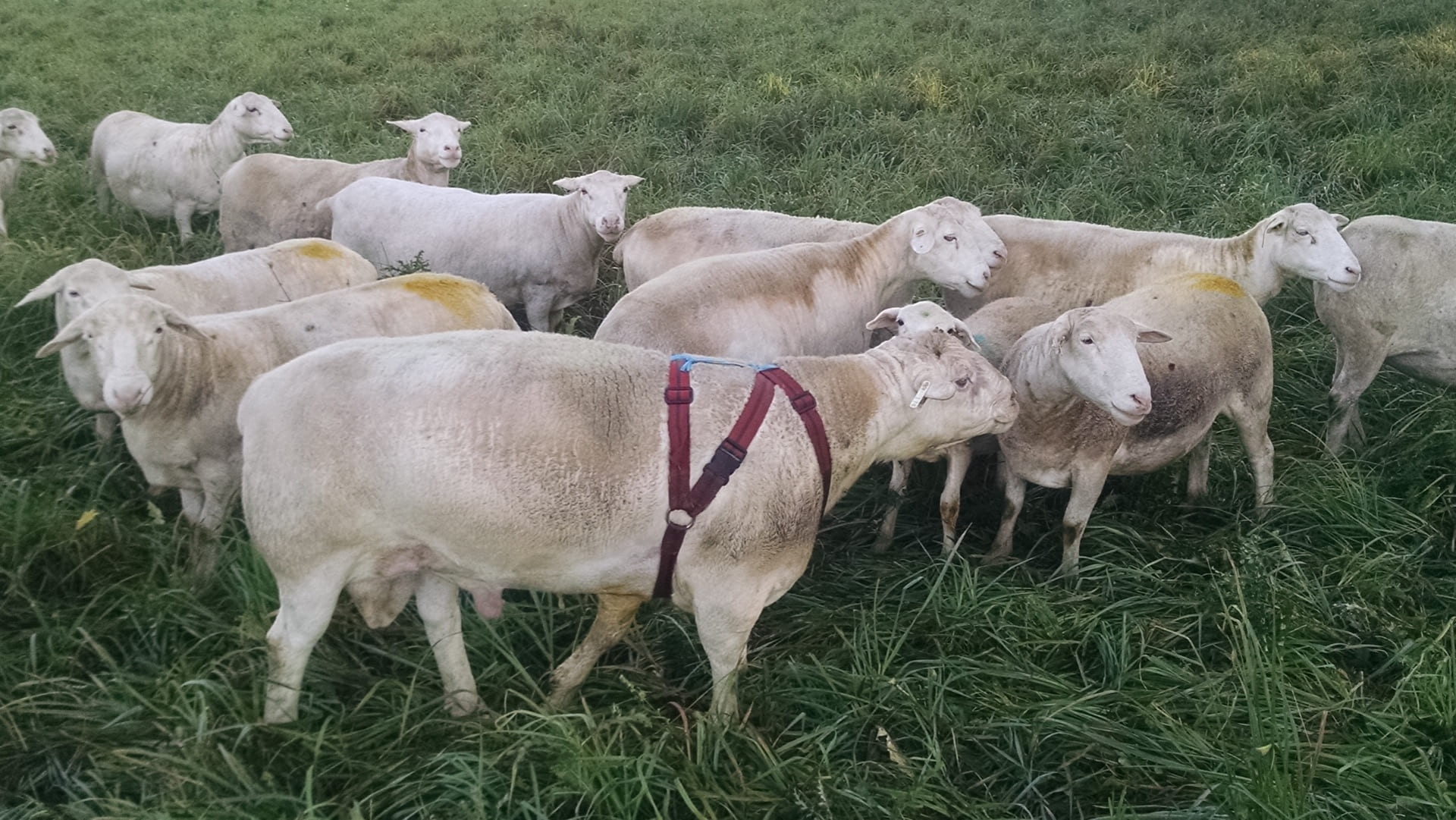 The yellow color on the rumps of three of these ewes indicates that they were bred. Courtesy of Ulf Kintzel / White Clover Sheep Farm.

I am using two different methods of keeping track of which ewes were bred by which ram. One method is the use of breeding harnesses. The other is the use of spray paint to identify the ewes. They work, in my view, equally well. Which method I use depends on any given year and the relation of my ewes to existing rams I own. I will describe both methods and you, the reader, can decide if one or the other works for you.

The use of a breeding harness is a well-established way of keeping track of breeding activity. The harness will be put on the ram and a crayon block will be attached to the harness. Some blocks are secured by a metal pin, some can be snapped in. The placement of the crayon is in the brisket area. When the ram tops a ewe in season, he also marks her on the rump. Crayons come in various colors like blue, green, purple, orange, yellow, and red. They are also available in three different degrees of hardness, which makes them suitable for a variety of weather from hot to mild to cold. Be sure what your temperature range will be during breeding season so that you order crayons with suitable hardness. There are various harnesses on the market. The most common and the cheapest is a black nylon harness, which I very much dislike. It never stayed in place when I used it. Other sheep farmers reported the same problem. The customer I quoted above used it as well. Other slightly more expensive harnesses were developed in the attempt to address that flaw in design. Premier One Supplies, Weaver, Syrvet, and Sure-Sired are some of the most common brand names for breeding harnesses of various kinds and quality. I have settled for a harness called “Matingmark,” made in New Zealand. It is sold by companies like Hunter Nutrition, Valley Vet, and Amazon. The added benefit of this harness is the fact that the crayon block snaps in, which makes the metal pin to secure the crayon obsolete. This pin can rub on a ram’s front leg and can cause irritations. 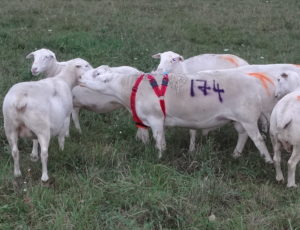 At the beginning of breeding season, I start with a lighter crayon color, i.e. yellow. This allows me at a later point to use a darker color, i.e. blue, which will cover the lighter color if a ewe returns to season and gets bred again. Depending on how many ewes a ram will breed, I usually switch the crayon color no later than one estrus cycle, which is about 17 to 19 days. The use of different colors for the same ram during the course of a breeding season will allow you to have a good idea when a ewe is about due to lamb. If a ewe runs into health problems during gestation and you need professional help, the first question your vet will ask you is “When is she due?”

You can also use different colors for different rams when you have your flock split during breeding season and each group is matched with a different ram. This way you will know during lambing season which ewe has been bred by what ram. You can then still use a second color crayon later during breeding season for each of these rams since there are six different colors available. Please keep in mind, blue and green crayon colors will, in my experience, be almost indistinguishable when they are faded after a few months. 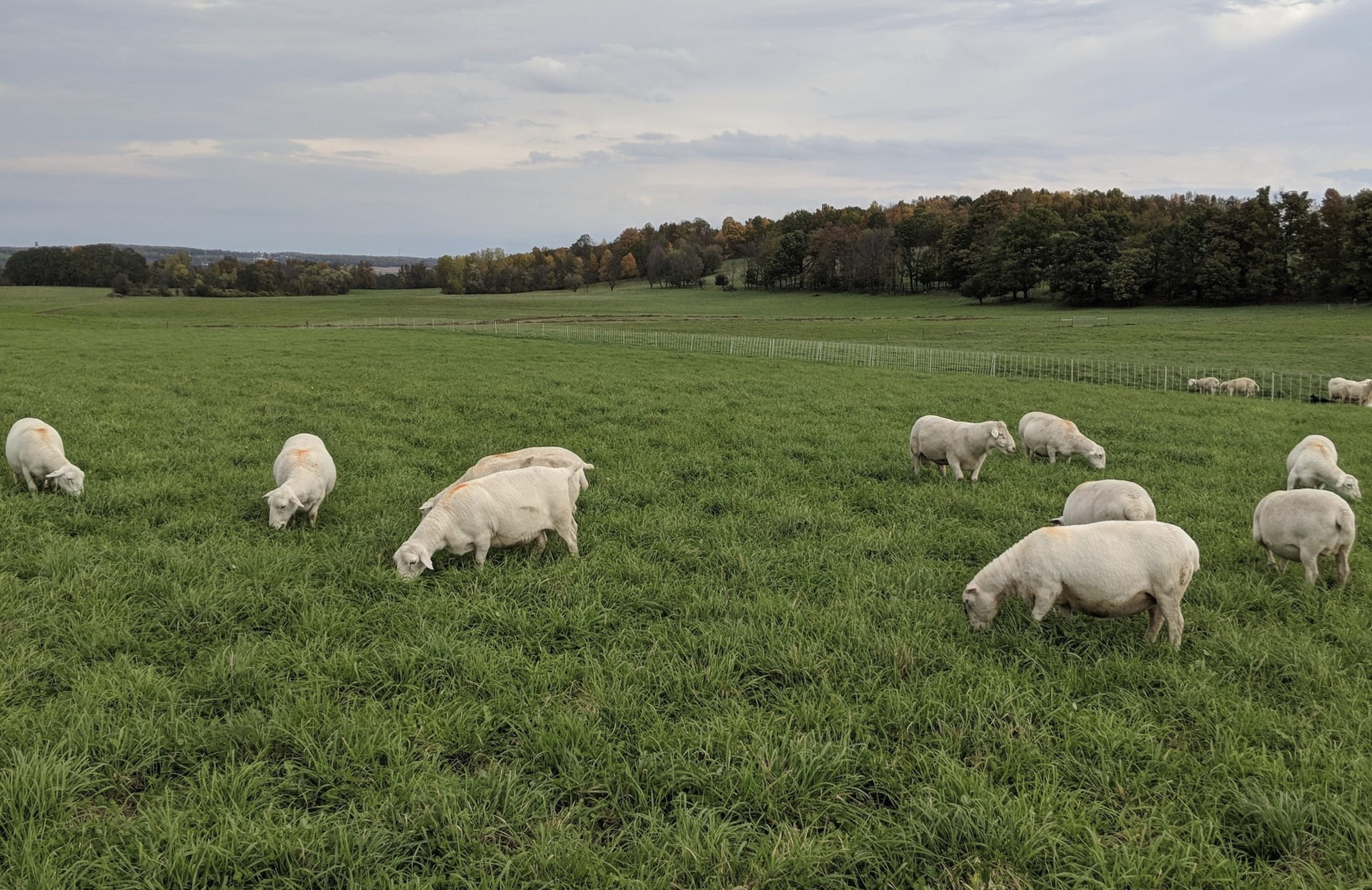 An orange dot on the wither of these ten select ewes will indicate five months later that they were bred by my White Dorper ram Outback. Courtesy of Ulf Kintzel / White Clover Sheep Farm.

The quality of the crayon blocks can vary greatly. At times, the rams leave a definitive mark when breeding, at other times, it is rather faint. Changing weather can play a role, too. I tackle this problem by running the entire flock through the chute and spray a dot on the wither of the ewes that matches the color of the crayon. This dot will surely last all the way to lambing season. I do that a few weeks after breeding season to avoid stress right after the ewes have been bred, which can cause fertilized eggs to abort and not attach to the uterus wall. That is a common problem when ewes are stressed during breeding season. The spray paint I use is specifically designed for sheep. That may be of concern to anyone who has wool sheep and has a good market or a good use for the wool. The paint can easily be washed out when the wool is being processed. There are a few different brands on the market. I currently use the brand Sprayline. However, I have not found a difference in any of the brands that were available over the years. Mid-States Wool Growers and Premier One Supplies are two companies that offer spray paint for sheep. A few other companies that offer sheep supplies may also offer it.

My second way of keeping track of breeding activity is to split the flock into the groups I want for each ram, and to mark the ewes with a dot on the wither just before breeding starts. I tend to use colors that will match or will somewhat match the color of the tags of the future lambs that I described in my previous Small Farms Quarterly article, “How Crayons Inspired My Sheep Tracking System.” For instance, all my ewe lambs born to “Slick” will receive a fuchsia-colored ear tag. The ewes to be bred by him will receive a red dot on the wither. All ewes bred by “Outback” receive an orange dot because his female off-spring will get salmon-colored tags. As silly as it may sound, that is helpful later when I tag their lambs. Usually, I omit putting a dot on the largest group of ewes because all ewes without a dot will have been bred by yet another ram. That saves me some spray paint and some expense. 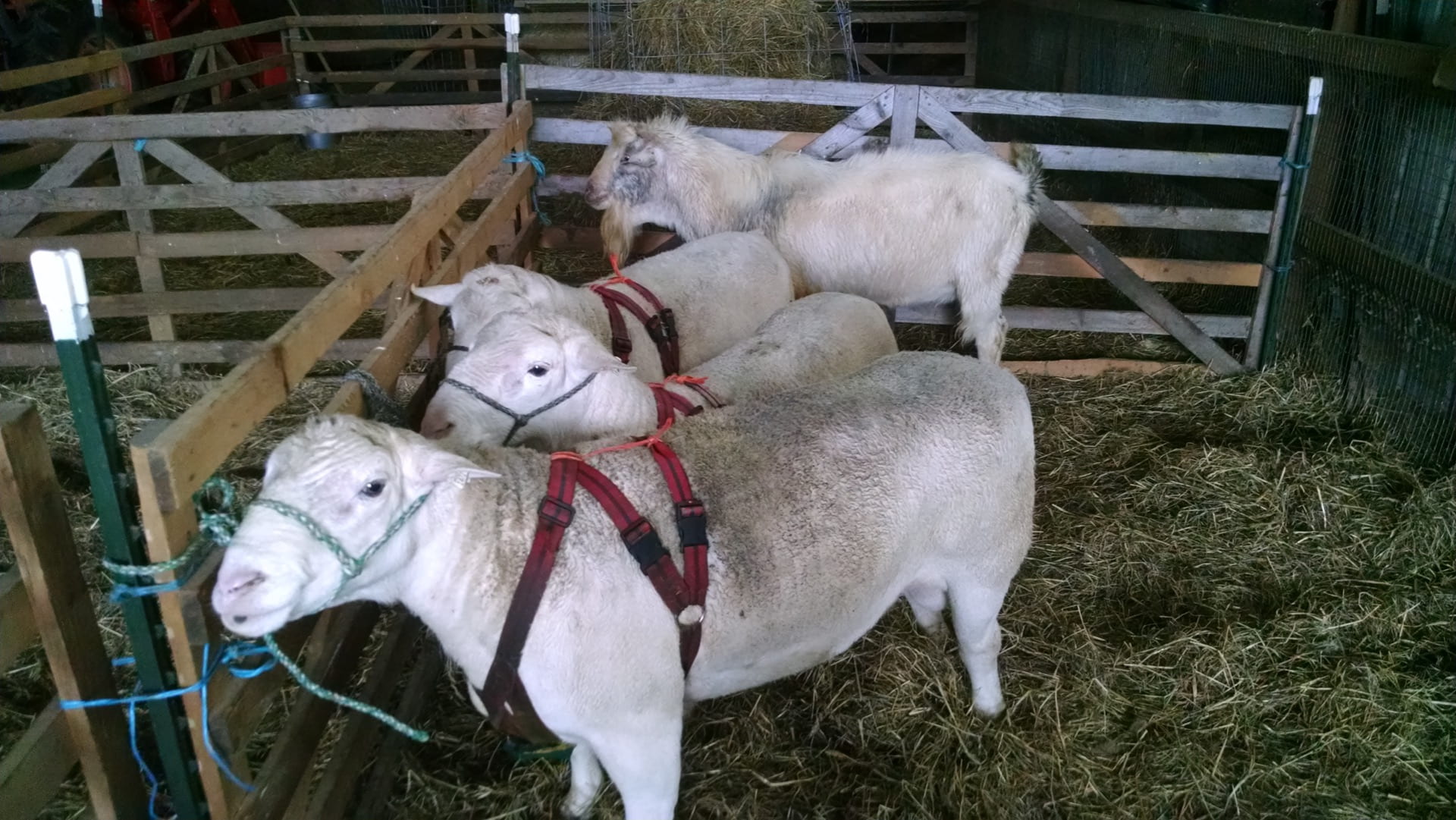 The bale string connecting front and rear part of the harness is an additional aid to keep it from slipping over the ram’s head. Courtesy of Ulf Kintzel / White Clover Sheep Farm.

Eachgroup of ewes and one ram will stay separate for about one breeding cycle, which is on average 17 to 19 days long but can last for individual ewes up to 21 days. Usually, I go with the 21 days to maximize the use of my rams. That means all ewes will have come into season and will be bred once. After these three weeks, I take the rams out and let all ewes join back together. Keeping the groups separated for a longer time than these three weeks becomes unsustainable for me. A few ewes will not have become pregnant and will return to season. These ewes will in the coming three weeks be bred a second time by a ram that is now with all the ewes. He will wear a breeding harness so that I can keep track of those ewes that were re-bred. The harness stays on the ram for a second cycle or 21 days. He will remain with the flock after that and on rare occasions, a ewe will return to season a second time and thus be bred for the third time. Returning to season is not that unusual. However, needing three or more cycles to stay pregnant is undesirable. This is likely a ewe that will be culled.

I am aware of sheep farmers who find that approach too cumbersome and too management intensive. Perhaps you too may feel that way. However, think about it this way: inbreeding brings genetic faults to show while genetic diversity does not. If your ram breeds some of his own daughters and just one lamb shows a genetic default that will keep it from thriving or even living, you lost income. To me, the extra time spent, and the extra management skill needed, is well worth the effort. If I still haven’t convinced you, there is another approach you can use. You can use a ram lamb one season, then castrate him and turn him into burger meat, and use a new ram the following year. That can be done year after year.

Ulf owns and operates White Clover Sheep Farm and breeds and raises grass-fed White Dorper sheep and Kiko goats without any grain feeding and offers breeding stock suitable for grazing. He is a native of Germany and lives in the US since 1995. He farms in the Finger Lakes area in upstate New York. His website address is www.whitecloversheepfarm.com. He can be reached by e-mail at ulf@whitecloversheepfarm.com or by phone during “calling hour” specified on his answering machine at 585-554-3313.
Posted in Uncategorized