A perfect crop for many farm enterprises. 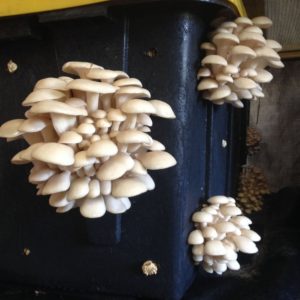 The time is ripe for growers to consider adding mushrooms as a crop to their farm enterprise. Specialty mushrooms are defined by USDA as any species of mushroom not belonging to the genus Agaricus, the most commonly grown and consumed mushroom in the United States. In fact, the white button, crimini, and portabella are all derived from a single species, Agaricus bisporus. The most common specialty mushrooms are shiitake (Lentinula edodes) and oyster (Pleuterous ostreatus), which represent the second and third most produced in the U.S.

USDA data shows a remarkable increase in demand for mushrooms; U.S. per capita consumption of mushrooms was 2.7 pounds in 1978, but is now well over 4 lbs. In 2016 and 2017, specialty mushroom (non-Agaricus) sales have consistently increased at a rate of 4% per year, with overall mushroom sales in U.S. increasing by over 15 percent. Despite this rapid growth on the consumer end, the most recent USDA report indicates that both the number of growers and overall production volume rates have been declining over the past three seasons. There is clearly an open niche for more growers, and small farms are the perfect place to encourage more domestic production.

So, what does it take to grow specialty mushrooms? This article outlines the opportunities and differences between outdoor and indoor cultivation systems, with an eye toward small farm commercial enterprises. Future articles will expand on these systems and dive deeper into the economic considerations for profitable production.

Regardless of the location, species, and method, there are four main steps to the process of growing mushrooms:

The word “substrate” refers to any material that is a food source and growing medium for your mushroom mycelium. These could include logs, stumps, woodchips, straw, sawdust, coffee grounds, grain hulls, and other carbon-rich materials. Some species are very particular about the type and mix of substrates you use, while others are more flexible. It’s often best to explore the landscape around you and determine what materials are available and most cost effective for you to use, based on the scale of your operation.

“Spawn” is intentionally cultivated mycelium from a known species that has been isolated, generally in a sterile lab facility to ensure it is free of outside contaminants. For most growers, spawn is purchased from a supplier, much like a vegetable grower buying seed from a company. You can find a list of suppliers on our www.CornellMushrooms.org website.

This step of the process involves bringing the spawn into contact with the substrate to initiate its growth and development. Depending on the material, you might drill holes into a log or cut wedges into a stump, or simply mix the spawn evenly and pack it into bags or containers. Outdoor methods can generally be done with little concern for introducing contaminants (mostly molds), while most of the indoor methods require the substrate be first “cleaned” (via heat, steam, or other methods) and then inoculated in a clean space to avoid contaminating the batch.

Starting after inoculation, the spawn needs time to growth through the entire mix of substrate, and the rate at which this occurs will varying given the density of the substrate and species as mushroom. Oyster, for instance, is much faster growing than Shiitake. In general, logs and stumps can take from 6-18 months, woodchips 2-6 months, and straw and sawdust as little as 3-4 weeks. While the finer substrates may be ready to fruit sooner, they also have a shorter production life; sawdust and straw based systems tend to produce for 4 – 8 weeks, whereas logs can reliably produce for 3 years or more.  In outdoor systems, little effort is required during this period, as long as logs are kept in the shade of the trees. When producing indoors, its critical during this phase to maintain a consistent temperature (usually 65-70° F) and monitor for mold contaminants during this initial stage of growth.

After the substrate material has been fully consumed by the mycelium, fruiting can occur. For good fruiting, the proper temperature, light, humidity, and airflow parameters must be maintained. Monitoring is mostly to ensure that insects and other pests (slugs) don’t get to the harvest before you do. Some substrates (such as shiitake logs) can be “forced” to fruit, while most of the indoor methods will fruit spontaneously, called a “flush” of mushrooms. After harvesting, the material needs to rest and recharge, and then a second and even third flush can usually occur, often spread out by several weeks.

Keep in mind that while the steps above are generally true for all methods and species, there is quite a bit of detail depending on the species of mushrooms and growing medium you choose. Let’s next look at the differences when growing outside versus indoors. 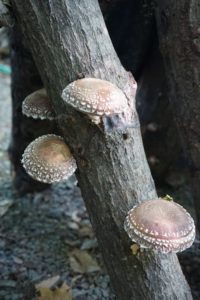 In many senses, growing mushrooms outdoors is ideal because the forest (or any shady environment with good humidity and air flow) creates the ideal conditions for fruiting without the need for any climate control on the part of the farmer. Indeed, the forest is where the mushrooms we grow come from, so why not simply grow them there? This is the thinking that led to the development of Cornell’s initial mushroom research and extension project, led by professor (now emeritus) Kenneth Mudge, who was particularly interested in agroforestry, or the combination of trees, forests, and agricultural crop production.

Ken researched several species for almost 15 years, mostly focused on log-grown shiitake mushrooms as they quickly proved to have the most economic viability. We also know that lion’s mane, oyster, wine cap stropharia, and a few other minor species can be grown successfully outdoors. We detail how to grow these on our website.

The main limit with forest or outdoor cultivation is that out of the species listed above, only the log-grown shiitake can be growth consistently enough to yield mushrooms on a weekly basis, a necessary part of the supply chain for a farm business. This is due to the unique property that shiitake logs can be soaked or “forced” to fruit by immersing the logs in water for 12-24 hours, which stimulates them to fruit. This method can be utilized to produce mushrooms quite reliably from around the first week in June through the middle to late part of October, at least in the climate of Central NY. The other species, while successful, fruit on their own time, and so are not good choices if the goal is to produce consistent yields for markets.

Once we step out of the woods and into a contained space, the list of species we can reliably grow starts to greatly expand. Along with it, we also have to start concerning ourselves with monitoring and maintaining the ideal environment for the various stages of production, from the incubation to fruiting. And probably most challenging, we have to take extra measures to reduce and eliminate sources of contamination in our substrates, which will arrest and prevent our desired mushrooms from fruiting. This issue is almost non-existent with outdoor production, a big advantage point. 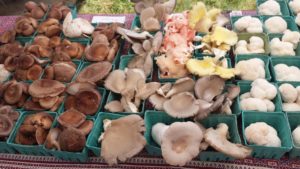 Indoor farming systems are sometimes referred to as “controlled environment agriculture,” which includes other systems such as hydroponics, aquaponics, and greenhouse production. In contrast to CEA systems used for greens and herbs, mushrooms can be produced in locations with minimal infrastructure and capital to start and sustain production. However, considerations and controls for temperature, humidity, light, and air flow present do need to be made.

A big advantage of indoor production is that systems can be adapted to work in a wide range of abandoned and underutilized farm infrastructure including barns, outbuildings, high tunnels, and storage facilities. In an urban environment, basements, shipping containers, and warehouse spaces can be easily retrofitted for production. This positions mushrooms to be a system that is accessible to both rural and urban farms and those farmers with limited capital and access to other resources for start-up.

Our website is a reliable source of information on all things pertaining to specialty mushroom cultivation in the small farm context. We offer two online courses each year, along with several downloadable resource guides, videos, and tutorials. Over the next year, you will see new resources and events that will continue to expand our offerings and give more in-depth information about production systems at a range of scales. All these resources can be accessed at www.CornellMushrooms.org.

Steve is an Extension Specialist focused on specialty mushroom production and agroforestry. Throughout his career, Steve has taught thousands of people about the ways farming and forestry can be combined to both benefit the ecology and economies of small farms.  He is also a farmer, author, hiker, and musician.
Posted in Small Farms Quarterly