Home » Posts » Heat Stress: You Can Still Deal with the Effects Long After Summer

Heat Stress: You Can Still Deal with the Effects Long After Summer 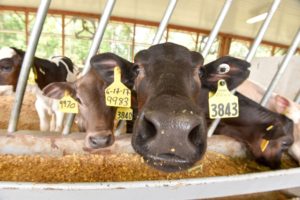 Even through the winter months, cows can deal with the long-term consequences of heat stress.
R.J. Anderson / Cornell Cooperative Extension

Heat stress, heat stress, heat stress. I think that was the hot topic this summer and every dairy farmer had to deal with it, whether it was in the lactating cows, dry cows, calves or people. I had more phone calls this summer about heat stroke in calves, then combined for the past seven years. While we may be enjoying the cooler fall temperatures (the cows are too), we are still overcoming challenges related to this summer’s heat.

As August came to a close and September rolled in, we had one last round of heat. For some cows (and calves), this was too much. I had many farms report that the last bout of heat was the hardest. It was shorter in duration then that in early July, but the cows took a hard hit, and many didn’t recover. This led to phone calls asking what’s going on, why this time? Cows are like humans; they can only handle so much stress before they crash. Heat stress is an additional stressor to the animal. When multiple stressors are present (overcrowding in pens and at the feed-bunk, social changes, routine changes, feed changes…) they lead to compounding negative results. For some cows, the last bout of heat stress was the tipping point. Many farms chose to dry cows off early, while some had to cull cows and others decided the best option was euthanasia. This unplanned change in inventory (both lactating and youngstock) can have longer term implications as it changes the herd makeup. Farmers are now looking at having an overcrowded dry cow pen, decreased overall milk production, and a potential need to purchase animals due to animals that were culled or euthanized. Additionally, many farmers are still dealing with the longer-term consequences of heat stress, especially when it comes to calves.

“Weird bugs” That was the phase a farmer used to describe what was affecting his calves. “It’s like pneumonia, but it’s not and we can’t stay ahead of it”.

While we can plan to be pro-active for next summer, we need to be reactive NOW.

While we are being re-active this fall and winter taking care of animals, and making some hard decisions we can also be pro-active for next year. While working on your 2019 operating budget, have discussions about purchasing more fans, curtains, sprinklers, etc. Look at your inventory projections and determine if any pens will be overcrowded in June through August. Should you depopulate, or can you move animals to a different pen? What group of animals was hardest hit on your farm, and what management changes could be made before next year? Should you make a management decision not to breed cows in November so you don’t have calves born in August? Should you invest in an activity monitoring system? These are all potential topics to review and have some discussion on at a profit team meeting, with your industry consultants or Extension specialists.