Home » Posts » More Than a Matter of Taste, Part II

More Than a Matter of Taste, Part II

This excerpt is from Fred Provenza’s book Nourishment: What Animals Can Teach Us About Rediscovering Our Nutritional Wisdom (Chelsea Green Publishing, 2018) and is reprinted with permission from the publisher.

Feedback from the Gut Microbiome 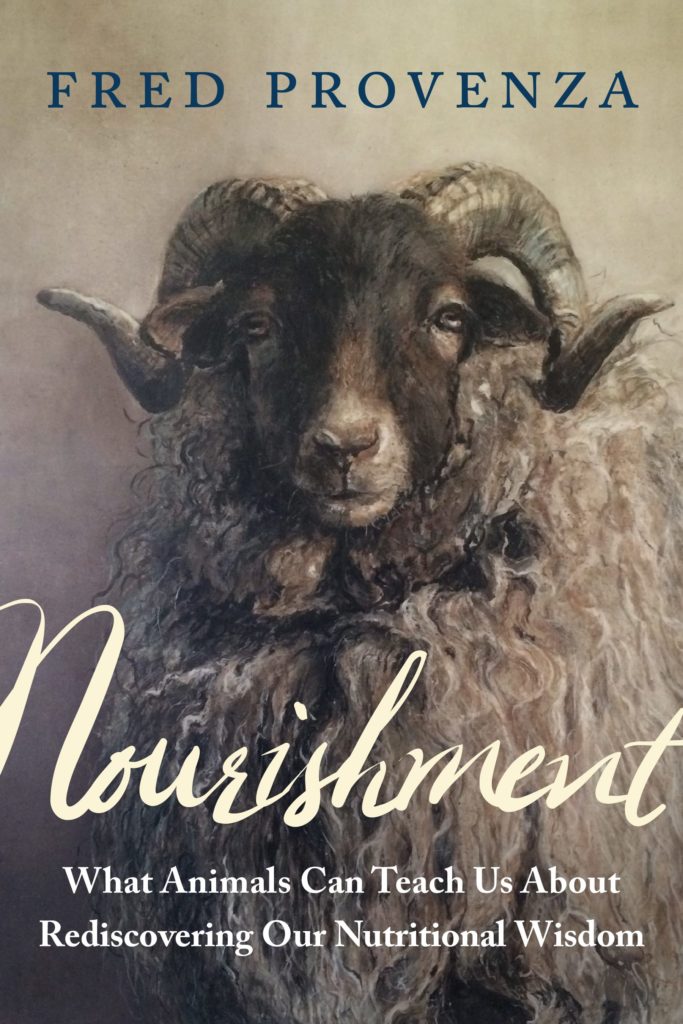 In 1968, near the Department of Defense’s Dugway Proving Grounds in Utah, 6,400 sheep were killed instantly by aerially applied nerve gas that drifted in the wrong direction due to a sudden shift in winds. In January 1971, over half of the sheep in a herd of 2,400 died of unknown causes in less than 24 hours near Garrison on the Utah-Nevada border. In that instance, though, nerve gas wasn’t the cause. What happened near Garrison was due to a phenomenon that had been explained in an article that had been published twenty years prior. Photos in that article showed sheep carcasses strewn across the salt desert. A dead ewe lay in the foreground while another ewe nibbled an herb with bluish green leaves. That herb was halogeton (Halogeton glomeratus), which thrives in salt desert soil that is high in sodium and chlorine. Sodium in halogeton forms salts of oxalic acid, which is exuded as residue on leaves. That residue can be toxic to herbivores.
Ironically, sheep who have experience eating halogeton can eat up to 36 percent of their diet as halogeton without any ill effects. Poisoning occurs when hungry sheep who have never eaten the plant before (researchers use the term “naive” sheep) are forced to eat too much halogeton too quickly. Historically, that occurred when sheep were trucked long distances and put in areas dominated by halogeton.
Intoxication ensues when oxalate is absorbed faster than it can be detoxified by rumen microorganisms that degrade oxalates. Sheep adapted to eating halogeton have much higher rates of oxalate degradation than do naive sheep. Successful transitions to a halogeton diet are accompanied by a ten-fold increase in the rate of oxalate metabolism by rumen microbes. Sheep need three to four days to build up an aptly large microbial population to rapidly degrade oxalate. Adapted sheep can tolerate two and a half times more oxalate than nonadapted sheep.
Scientists who study wild and domestic herbivores have long valued how diet affects the microbiome, which in turn affects the diet, as microbial ecologist Robert Hungate highlights in his classic book The Rumen and Its Microbes, published over fifty years ago. Ruminants and hindgut fermenters such as horses rely on bacteria to provide them with energy, protein, and vitamins. Bacteria digest the cell walls (cellulose) that give structure to plants. Volatile fatty acids such as propionate, butyrate, and acetate are produced from microbial fermentation of cellulose. They are absorbed directly through the rumen wall and provide most of the energy these animals require for activity and growth. The bodies of dead microbes provide 80 percent of the protein needs of ruminants. Bacteria in the rumen also synthesize B vitamins for ruminants.
Thus, the plants herbivores eat provide food for rumen microbes, which in turn feed herbivores. High-forage diets select for bacteria that digest cellulose, while high-grain feedlot diets select for bacteria that digest starch. Diets rich in secondary compounds select for microbes that enable herbivores to eat many otherwise potentially toxic plants such as halogeton. The more diverse the diet, the greater the number of different microbial species that can thrive in the gut.
A positive feedback loop also exists between a person’s food preferences, the species of microbes in their gut, and the preferences of those gut microbes for different dietary items. Microbes provide feedback to the brain through nerves, neurotransmitters, peptides (short-chain amino acids), and hormones. The same is true for rodents. Studies of rats show that certain species of gut bacteria affect the levels of the appetite-stimulating hormone ghrelin, and studies of mice show that other species of gut bacteria affect the appetite-suppressing hormone leptin.
The microbiome also affects gut motility and gut feelings through the hormone serotonin. Serotonin regulates intestinal movements and influences appetite, sleep, and mood contributing to feelings of well-being and happiness. Serotonin is primarily found in the gastrointestinal tract (95 percent),
blood platelets, and the central nervous system (5 percent) of animals, including humans. Specialized cells (enterochromaffin cells) in the gastrointestinal tract form synapses that link directly with neurons in the brain, which allows cross talk between the gut and the brain to occur in milliseconds rather than minutes. To protect the body from toxins, these cells immediately send signals to induce vomiting and diarrhea. Enterochromaffin cells express chemosensory receptors for specific compounds, they are electrically excitable, and they modulate serotonin-sensitive afferent nerve fibers through synaptic connections. That enables enterochromaffin cells to detect and transduce environmental, metabolic, and homeostatic information (gut feelings) from the gut directly to the brain.
Microbes also affect emotions. For example, gamma-aminobutyric acid (GABA) is a key neurotransmitter that dampens the fear and anxiety that mammals experience when neurons in the central nervous system are overexcited. Species of gut bacteria such as Lactobacillus rhamnosus alter expression of GABA messenger RNA in various parts of the brain via the vagus nerve, which connects the gut with the brain. Importantly, L. rhamnosus reduced stress-induced corticosterone and anxiety- and depression-related behavior. These findings highlight the key role of gut bacteria in communication of the gut with the brain and suggest gut bacteria may be useful therapeutic aides in stress-related disorders such as anxiety and depression.

Fred Provenza is professor emeritus of Behavioral Ecology in the Department of Wildland Resources at Utah State University, where he directed an award-winning research group that pioneered an understanding of how learning influences foraging behavior and how behavior links soils and plants with herbivores and humans. Provenza is one of the founders of BEHAVE, an international network of scientists and land managers committed to integrating behavioral principles with local knowledge to enhance environmental, economic, and cultural values of rural and urban communities. His latest book Nourishment: What Animals Can Teach Us About Rediscovering Our Nutritional Wisdom will be published in November 2018.

Kacey is the Cornell Small Farms Program’s communications specialist. In this role, she manages all storytelling and outreach across the program’s website, social media, e-newsletter, magazine and more. Kacey has worked in communications and journalism for more than a decade, with a primary focus on science and sustainability.
Posted in Small Farms Quarterly