Many urban growers have questions about food safety requirements.
By Yolanda Gonzalez and Samuel Anderson 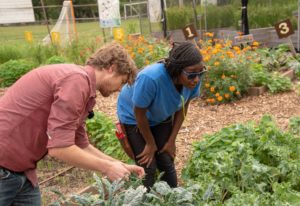 Commercial urban farmers in New York City, similar to producers upstate, sell through an array of marketing outlets, from restaurants and grocery stores to farm stands and CSAs. Unlike their rural counterparts, commercial urban farmers rarely generate the sales that mandate them to comply with the requirements of the Food Safety Modernization Act (FSMA). Despite being qualified exempt from FSMA, many urban growers have questions about food safety requirements for different marketing channels and in terms of general best practices.

Urban Agriculture Specialist Yolanda Gonzalez presented an “Urban Ag Food Safety” workshop for farmers-in-training in June at The Youth Farm in Brooklyn and in September at Kingsborough Community College Urban Farm. The training provided a practical guide to food safety for apprentices and interns working on urban farms.

Along with basic training, Yolanda has also provided one-on-one technical assistance to both soil-based and controlled environment agriculture producers on GAP certification requirements and food safety plans, as most producers do not have a written food safety plan. The ability to consult larger-scale farms on their options for obtaining food safety certifications leads to increase farm viability as it opens the door to selling produce directly to distributors and retail outlets, such as Whole Foods Market and the new Wegmans supermarket slated to open in Brooklyn next year.