Feeding hay in the winter is in many parts a reality in the Northeast. You will hear often these days that the best way to deal with hay in a grass-fed operation is to rid yourself of hay feeding and graze stockpiled forage instead. In my view it is true that extending the grazing season is a good and desirable goal and should be an aim for anyone. Well-managed pasture will almost always be better for the sheep than stored forage. Besides, it is likely to be cheaper as well. 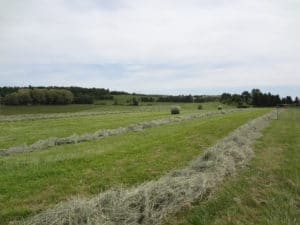 This hay was cut June 3 and is of great quality for grass-fed sheep.

However, in some areas of the Northeast there are limits to how long you can graze into the winter. If you are trying to extend the grazing season, please ask yourself to what end. Wanting to extend grazing season cannot be a goal in itself. You are doing yourself no favor if you can show pretty pictures of your sheep in deep snow, claiming they still graze, when the energy used to get to the grass and to keep warm when the wind blows, and the temperatures are very low. That means that in many parts of the Northeast, feeding hay during a certain period will be the better option to wanting to extend grazing even more. My hay feeding period starts about early to mid-January and ends when the grass grows in the spring and the sheep have lambed and are no longer in the barn. That is usually early to mid-April, which means my hay feeding time lasts about 100 days in most years.

Before I start discussing the quality of the hay I am seeking, you may have noticed by now that I have not said forage. You may ask by now “What about baleage or haylage”? If you can make quality baleage, go for it. Just note that any mold in haylage have killed many sheep over the years by causing listeriosis, also called circling disease. Sheep are quite sensitive to mold in baleage. In addition, once a sheep catches listeriosis, there is next to no way to save it. For that reason and for reasons that just fit my management system better, I have stuck to dry hay.

Most of my hay is made at my farm. It is custom-hayed by my neighbor Peter. I like to get the first cutting made as early as possible. In some years this may be still late May, in most years it will be made during the first week of June. In any event, I like to have that first-cutting hay made before the orchard grass blooms. There are two problems with that: First, the weather is not that stable yet in most years in early June. Mid to late June brings much better hay making weather. Secondly, the yield is still lower than it could be. These two reasons keep many to cut the grass in late May and early June. However, that is the one of the best quality hay you can make. It is not only high in protein. It is also high in energy. Which leads me to the next issue.

Many times, when I am asked about the quality of hay, I am asked what protein content I am seeking. I am very dismissive of needing to know about the protein. If your hay was cut at a palatable stage and didn’t receive rain while drying, chances are that the protein content is high enough any given time of the year no matter what your hay field consists of. I know this is a bold statement, but I stand by it. Besides, one third of the protein a sheep receives, it receives from rumen bacteria that die off. These bacteria feed on celluloses.

What is important in hay is energy. Energy keeps you warm. Energy keeps you fat. Most of the winter you need exactly that for maintenance. However, the energy content in hay varies greatly throughout the year. Early cut hay has a lot of energy, both in the form of sugar and celluloses and very little in the undesired form of lignin. Second-cutting that grew in the months of June, July, and August has a good energy content as well. However, once the fall-flush starts, grass is low on energy. The nicest looking hay is the one that grew mostly in September and was made in September and October, which is often third cutting. Do they distinguish at hay auctions between second and third cutting when the hay is sold? Around here, they often don’t. Of course, if most of your grass grew during the summer months when you cut a field in September, the fall flush will increase your protein content while your hay still has a high energy content. So, you get to have it both ways.

One factor that greatly reduces energy content is rain. Rain washes out the highly soluble sugars. Getting a tenth of an inch of rain is one thing. But if you get a good shower in your hay it will reduce the quality tremendously. Hay that has received a steady rain, especially when it was close to getting dry, becomes useless for feeding purpose. This hay becomes bedding.

Another advantage of early-cut first-cutting hay is palatability. You want the sheep to want to eat it and you want them to eat a lot of it! Hay cut late with lots of stems has an increased amount of lignin. Lignin reduces intake. The importance of palatability cannot be overstated.
When I have my ewes in the barn and feed first and second cutting hay side by side, I am always amazed how much more they like the first cutting. Yet, I need some second-cutting, usually cut in late August or very early September, to feed my ewes in the jugs and for when the lambs start eating, which requires a very soft hay.

The exception to all the above is alfalfa. I am not experienced enough with alfalfa to give other people advice. I have been told that the energy content is high throughout the year. It is certainly a great feed, but it does not fit into a sheep-grazing enterprise since it does not take grazing well. Therefore, I have not been seeking it. If you make quality alfalfa hay, go for it. You can’t go wrong with it.

Alfalfa leads me to the last topic. I am often asked if certain forages aren’t too rich for sheep. There is no such thing as forage being “too rich”. Remember, you are replacing grain, which is always “richer” than any forage. However, your sheep can get Enterotoxemia when your forage is very good, regardless of whether it is grazed or stored forage. Enterotoxemia is better known as Overeating Disease, also known as Sudden Death Disease and Pulpy Kidney Disease in lambs. You can vaccinate against it with readily-available vaccines like Bar-Vac CD/T. (The T stands for tetanus, you might as well vaccinate against that one, too). You vaccinate the lambs twice with three to four weeks in between shots and the adult sheep get a booster shot once a year. 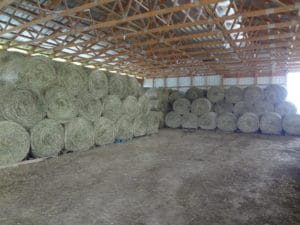 The hay is stored in the barn and on skids to avoid spoilage.

There are a couple more things worth pointing out. At times, when I run out of hay made at my farm, I go to one of the many hay auctions that we have around. I am blessed that we have them here. There are a couple of mistakes that I detect time and again that must be watched when making and storing hay. First, a lot of grass is cut too low when hay is made. I asked my hay guy Peter to set the mower as high as possible. Nothing, absolutely nothing is gained when cutting low, but a lot is lost. The forage closest to the ground has no quality. When you cut too low, your hay field needs more time to grow back. What you do get with low cutting is dirt or soil in the hay. The official name is ash. While ash is of course the mineral content of hay, it also includes dirt and soil. Ash reduces intake!

The second mistake in making hay is getting dust or mold in it. I am always baffled when I buy hay that clearly was made at the right time and without rain but then was stored on the dirt barn floor, drawing up moisture, which leads to dust and mold. That too leads to reduced quality and reduced intake and can even cause some health problems. I put all my hay in the barn and set it on palllets or skids and other bales stacked on top. That does not exclude that the hay draws up moisture entirely, but it surely reduces it a great deal.

Lastly, the feeding method is important. When I feed hay in the winter, I feed it free-choice. My sheep are never without hay. I don’t make them eat cleanly. Stems are used 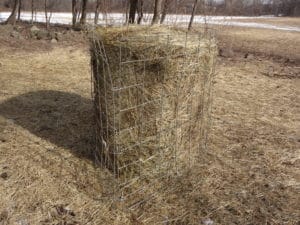 A twenty-dollar hay feeder made from a cattle panel.

for bedding or, applying to the hay fed in the pasture, spread out as fertilizer. I make access in feeders easy, which often requires that I turn the bale in the feeder upside down when it is half-eaten, which makes the good parts easily accessible again. The feeders I am using are made from cattle or livestock panels with staggered holes cut into them. Remember, you are trying to replace grain. That is no easy task.

In summary, I am seeking a very early-cut first-cutting dry hay without having received any rain, which washes out sugars. Such hay is high in both protein and energy and is very palatable. Sheep love it. The second-cutting I have made, will be made in the summer months. No hay is being made in the fall from grass that grew only during the fall flush. That growth will be pastured, or stock-piled and grazed later in late fall or early winter. Grass with lower energy content will increase its energy content again when the days get cooler and at the onset of some frost.

Ulf owns and operates White Clover Sheep Farm and breeds and raises grass-fed White Dorper sheep and Kiko goats without any grain feeding and offers breeding stock suitable for grazing. He is a native of Germany and lives in the US since 1995. He farms in the Finger Lakes area in upstate New York. His website address is www.whitecloversheepfarm.com. He can be reached by e-mail at ulf@whitecloversheepfarm.com or by phone during “calling hour” specified on his answering machine at 585-554-3313.
Posted in Livestock & Dairy, News and Updates