Susana Lein is ahead of the curve.  She has put together so many practices at Salamander Springs Farm near Berea, Kentucky that we can only scratch the surface in this article. Permaculture principles are at work in all aspects of the farm, from off-grid energy and contour swales, to no-till production of staple grains, beans, eggs, vegetables, fruits, nuts, and herbs. Please see her photo site, https://www.flickr.com/photos/salamanderspringsfarm/sets for a full breadth of the farm. 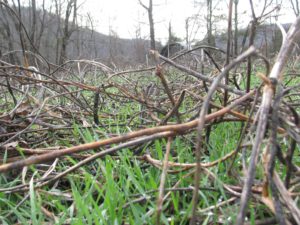 Susana follows many of the concepts of Japanese farmer and philosopher Masanobu Fukuoka, adapted to her middle-US climate and cleared hillside site.  One of his favorite methods was relay cropping, or sowing a crop into a field while another is still growing there.  This is one way Susana avoids tillage while growing an impressive array of crops.  Pinto and black turtle beans are important staple protein sources that she sells online and at local farmers markets and stores. Here is Susana’s basic method for growing dry beans on a small scale without tillage, utilizing relay cropping in exemplary fashion:

From late fall until spring, a winter cover crop mixture covers the field.  The mix is mostly winter wheat or rye (to provide straw mulch in the spring) with 20-30% being crimson clover, Austrian winter peas, daikon radish, turnip, mustards and other brassicas.  After the wheat or rye has headed out (close to maturity but still green) in mid-May, Susana broadcasts bean seed into the standing winter crop.  On the same day, the winter mix is scythed down, mulching the seed.  Soon, bean plants find their way through the residue. The cover crop mulch suppresses weeds until the beans grow to cover the field (without rows) through the summer.  In August, when the bean pods are mostly yellow and beginning to dry on the plants, Susana broadcasts buckwheat and cowpeas into the maturing crop.  Within a few days the bean plants are cut and removed from the field (the beans continue to dry in the granary for later processing).  The buckwheat germinates quickly, creating a “smother crop” to suppress weeds.  In warm weather, the cowpeas begin to dominate after a few weeks, creating extra biomass and cover.  In October and early November, the wheat or rye cover crop mixture (described above) is broadcast by hand into the late summer smother crop.  The buckwheat and cowpeas grow to partial maturity until killed by a hard frost; the winter cover soon grows up through it.  Thus the cycle starts again. 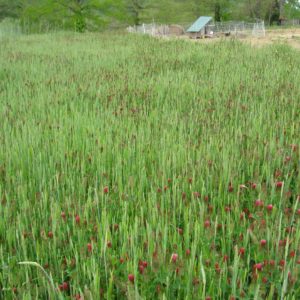 Strips of the field in dry bean production are rotated from year to year with strips sown with buckwheat, “Iron & Clay” cowpeas and 10% milo (grain sorghum) for poultry forage and cover crop seed production.   Over the years, pintos, black beans and this summer forage mix have marched back and forth across the field.  The summer forage mix is sown in May into the standing winter cover crop which is scythed—the same as for the dry bean cash crops.

Buckwheat and cowpeas germinate easily without much cover or rain.  Chickens move through other sections of the field during the spring and early summer, tearing down the winter cover crop to eat the wheat, rye, etc.  After 7-10 days, the chickens move on, and Susana sows the summer mix in their wake. She shakes the broadcast seed under the straw that the poultry have left on the ground with a fork or rake, sometimes spreading it around more evenly than they left it. The triple-whammy of the buckwheat, cowpea & milo crops plus chickens has strongly suppressed weeds while providing high quality chicken forage.  Chickens can also help cycle fertility in the system, feeding on weeds, cover crops, and soil biota and spreading manure.

As the summer cover crops mature, the chickens go back through these sections of the field.  Chickens love buckwheat and cowpeas at the green pod stage, and milo is a staple in their winter feed mix, which Susana also grows in her cornfields.  Cowpeas planted by mid-June produce viable seed, which Susana harvests before the chickens are moved in. Buckwheat planted by the end of June sows itself for a second crop while dry beans and cowpeas are maturing in the field.  Though originally planted in strips, the field becomes more of a patchwork of dry beans, diverse cover crops, and poultry forage.

How can this approach work with its glaring lack of tillage?

The system takes advantage of some powerful basic biology.  First and foremost, as Susana points out, not disturbing the soil keeps most weed seeds in a dormant state.  They just are not stimulated to germinate.  In fall she sows winter wheat, crimson clover, and radish which are “winter annuals”, species adapted to grow in cool weather.  Germinating in the fall, they survive through the winter in her region, and grow strongly in spring.  In early summer, they are programmed to make seed and die.  These plants have evolved to be highly competitive in the cooler months. 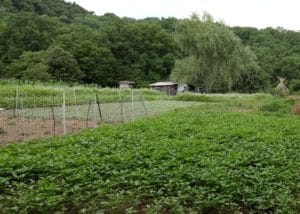 In contrast, buckwheat, cowpeas, milo, and dry beans are warm-season plants that thrive in summer and die at the first frost in October.  Beans are not particularly competitive; but buckwheat and milo are champions in that area.  In Kentucky, cowpeas are vigorous growers.
Ever changing conditions have taught Susana to experiment and diversify her cover crop mixes over the years. Cool-loving species dominate and suppress weeds from fall through late spring, creating a substantial amount of top growth (biomass) along with soil biology.  They are cut down when this biomass is at maximum, but at that point it is too late for them to regrow.  Meanwhile, beans have just been sown. The winter mix residue covers the seed with a mulch and suppresses germinating weeds. Now it is the beans’ turn to thrive, with long days and hot weather.  After they mature, there is still enough summer left for buckwheat and cowpeas to compete against recalcitrant weeds.  Then the season cools down and the process repeats—but next year the dry beans will be planted in neighboring sections of the field where weeds have been hit hard by chickens and the forage mix. 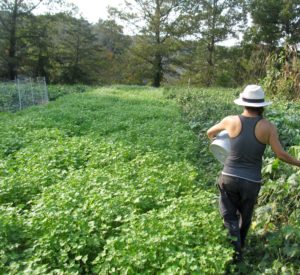 The use of broadcast sowing, considered old fashioned and inefficient by some, also has advantages.  Seed is not confined to rows with spaces in between where weeds can become established.  The random pattern covers the soil more completely when spread uniformly.  The mulch from the previous crop assures moisture retention and soil contact.  But perhaps the biggest plus of hand sowing is that no soil disturbance needs to happen during planting, and the increased levels of soil biology, health and tilth are not reduced by tillage.  Uniform broadcast sowing and scything are arts that Susana has enjoyed honing as well as teaching apprentices and workshop participants.  Susana puts tall stakes at 25 foot intervals to guide her hand sowing.

Beans are a good crop to grow with this method, though Susana has adapted it for others.  They have large seeds and can easily grow up through a fairly thick layer of mulch. Beans are nitrogen-fixers and have a low soil nitrogen demand.  This is an advantage over weeds if the winter cover crop has reduced nitrogen levels at the soil surface.  Beans also do not require the full summer season like tomatoes or winter squash.  This gives a bit more flexibility in planting and harvest dates, allowing efficient use of cover crops, such as delayed mowing of winter covers until they are easy to kill, and harvesting beans in time for a second buckwheat flush.

So goes the theory, and Susana implements it well.  There are a few weeds that can tolerate all that competition; she has sometimes removed curly dock and ironweed tops before they set seed.  In a cooler climate, perennials like quackgrass may be problematic.  If weeds do get out of hand in the summer cash crop, there is always the option of scything down everything, letting chickens forage, then planting an ultra-competitive mix of buckwheat, sorghum sudangrass, soybeans, sunflowers, and Japanese millet in a rescue operation.  But Susana has not needed to do this.

Reduced tillage practices take many forms. This story is part of a series featuring organic vegetable growers that have adopted reduced tillage practices on the way to greater farm sustainability. Experienced growers at diverse scales are tackling weeds, managing rotations, and integrating cover crops while minimizing soil disturbance. Look for past and future SFQ issues to learn the practices that are helping these growers build better soils. Visit this link or contact Ryan Maher of the Cornell SFP for more information on this project.

Annual weeds like ragweed and foxtail, which predominated in early years, are hardly seen today.  Perennials like ironweed and dock have a much weaker presence and depleted root energy storage.  Susana saw them as “pioneer species” on a ridge top devoid of topsoil when she started in 2001, but their presence today is much diminished.

Can this system be adapted to cooler regions like New York State?  (Maybe even with mechanized mowing?)  It is certainly worth experimenting, but start small.  Here are some suggestions:

Thanks to Susana Lein for extensive contributions and feedback on this article.

Ryan began with the SFP in the summer of 2013 and focuses on research and extension in soil health practices for vegetables. He is a Baltimore native with family and educational ties to CNY. After graduating from SUNY-ESF in 2003 he spent two summers training on diversified vegetable farms, first in SW Oregon and then in the Boston metro area. In 2007, he graduated from Iowa State with an MS in Sustainable Agriculture focusing on soils in native grassland restorations. He spent five years with the USDA-ARS in St. Paul MN, coordinating research on nutrient cycling in perennial forage crops. Ryan, his wife Jackie, and daughters Gia and Olive are happy to settle in CNY and enjoy the food, farms, forested hills, and water of the Finger Lakes region.
Posted in Reduced Tillage, Uncategorized