Visionary collaborations are creating new varieties to thrive in the Finger Lakes — which ones will become heirlooms for future generations?

Although they materialize everyday before our eyes, new books are written by people who spend countless hours and often years writing them.
The plants that feed us daily also are created by people who spend countless hours, years and sometimes decades to bring them to fruition.
How is a new variety made?
When does it become an ‘heirloom’?
Each variety has a unique story.
We are fortunate, here in the Finger Lakes, to have Cornell plant breeders, an organic seed company, organic farmers and a broadly engaged eaters to inform and inspire one another, creating new varieties for all generations to enjoy.
Here are the stories of three such varieties. 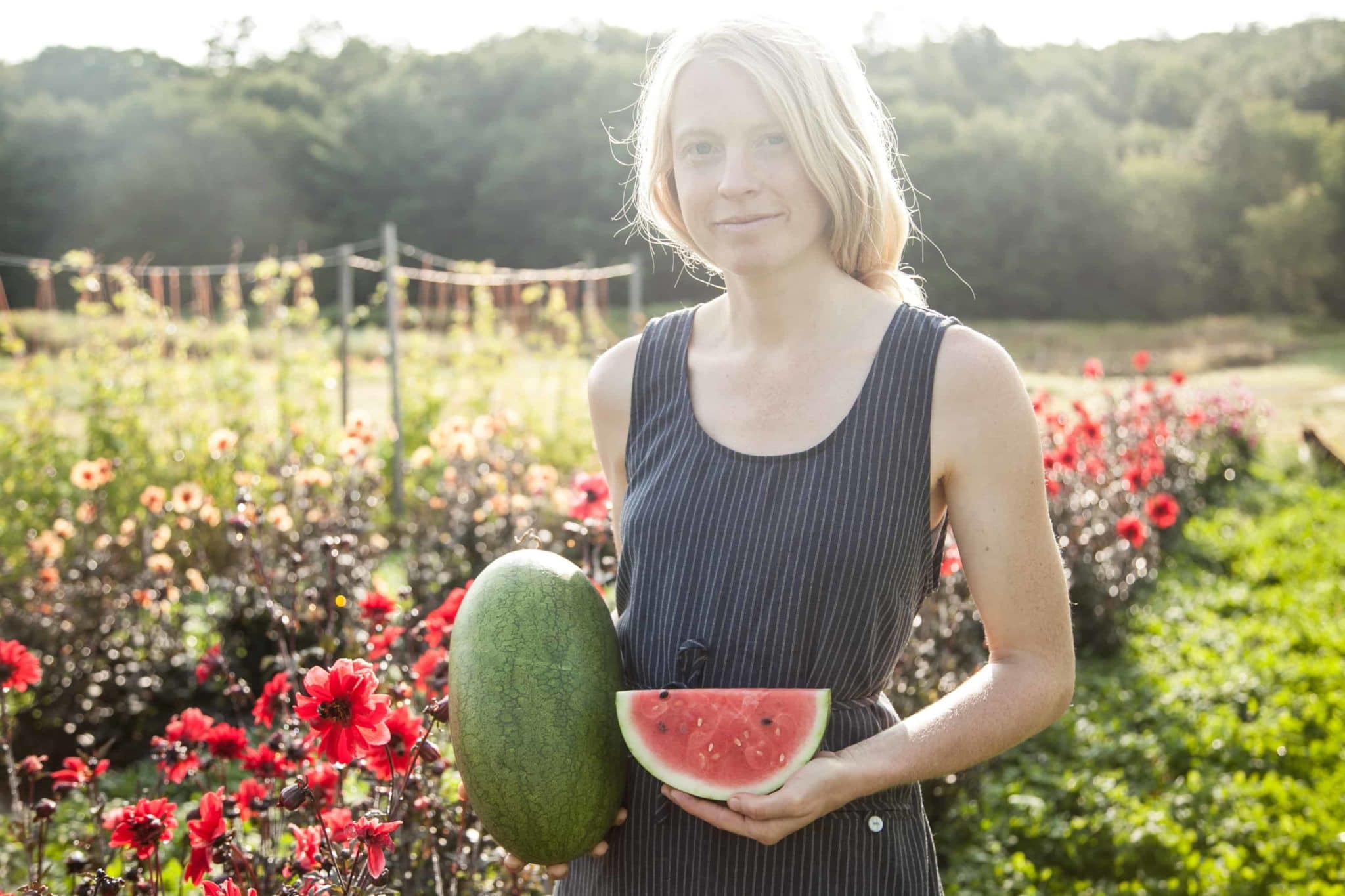 Each heirloom begins as a new variety, like a book no one has read. ‘August Ambrosia’ is a new watermelon developed by Cornell and Fruition Seeds that will likely become an heirloom for future generations. Courtesy of Petra Page-Mann.

August Ambrosia Watermelon
Eating fresh watermelon from the garden every day in August is a lot to ask here in the Northeast since most varieties are bred for the long, hot summers of California. Which is why Fruition Seeds, an organic seed company in the Finger Lakes collaborated with Michael Mazourek of Cornell University to develop a new variety, ‘August Ambrosia’, adapted specifically for our short seasons. August Ambrosia’s perfectly petite 4- to 6-pound oblong fruits ripen abundantly throughout August even in short, cool summers.  With sweet flesh, thin rind & small seeds, August Ambrosia is truly a watermelon worth your time & precious garden space. Despite abundant rain, moderate temperatures and resulting impressive disease pressure in 2017, August Ambrosia was indeed delicious every day in August.

First, meet Dr. Michael Mazourek of Cornell, a public plant breeder whose vision is to serve everyone, not business as usual. (Honeynut squash and Habanada pepper are two of his extraordinary varieties that have received national attention and inspired countless chefs, growers and eaters.) We are immensely fortunate to have Michael visioning new vegetable varieties here in the Northeast.

Michael is a classical plant breeder. Think of it this way: Golden Doodle (Golden Retriever + Poodle) dogs are a great example of classical animal breeding.  Nothing genetically modified in a laboratory, simply two good things cross as they could even without human management. So Michael made the initial cross of two watermelons, each with certain traits we were all hoping might combine just so.

Here’s the thing: Golden Doodles are consistent because the parent dogs are genetically uniform. Their true vegetative comparisons are F1 Hybrids (F1 stands for the ‘first filial generation’), which are similarly genetically uniform. Developing a new variety in the way Michael did creates exactly the opposite, the cross unleashing a brilliant (and often blinding) spectrum of diversity. He made, approximately, a watermelon mutt. Thousands of them.

So Michael made the initial watermelon cross and then selected two generations of watermelon ‘mutts’ (called ‘lines’ in plant breeding) before sharing 16 distinct lines of seed with Fruition Seeds. Fruition is an organic seed company in the Finger Lakes focused on flavor and regional adaptation, improving heirlooms as well as developing new ones, like August Ambrosia.
What did those 16 lines look like and taste like? Not only were not they 16 distinct lines, they were impressively diverse even within each line. Here is the tip of watermelon’s ice burg of genetic diversity:
-fruit that is red, yellow, pink, white or marbled different colors
-fruit that is crisp, crunchy
-fruit that is sweet, bland, watermelon-y, fragrant, not fragrant
-fruit that matures early, mid-season or late
-fruit that is round or oblong
-inner-rind that is thick or thin
-outer-rind that is dark green, light green, black-green or silver; solid, striped, speckled or lattice coloration
-seeds that are small, large, black, brown, white, crunchy, chewy or like stones
-plants that have 1 fruit or 5 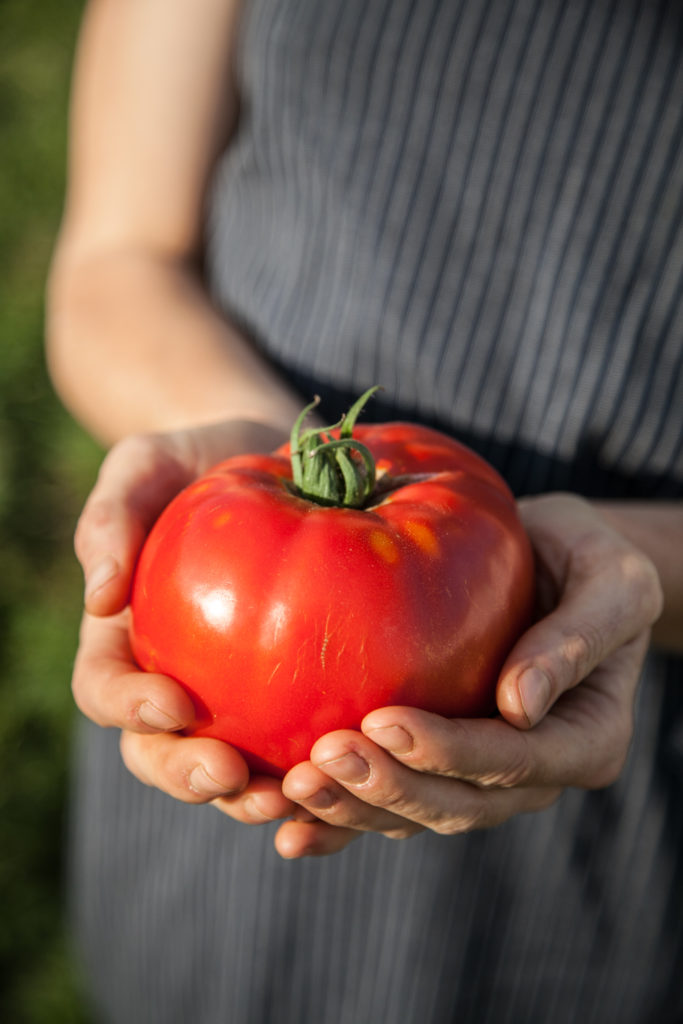 Brand new ‘Brandywise’ is the best of both worlds, combining the flavor of heirloom tomato ‘Brandywine’ with Cornell’s tomato resistant to Late Blight and Septoria tolerant of Early Blight. Courtesy of Petra Page-Mann.

If you love watermelon and endless surprise: what fun.  If you’re don’t care for finding needles in haystacks: what horror.  For Fruition Seeds, this was a dream come true.

There are many ways to approach variety development at this stage. Fruition Seeds took the often longer but less complicated approach of simply saving seed from select fruit without making any particular crosses. Can you imagine, from all the variables in the list above, finding the plant that expresses all the characteristics you want in your watermelon?

And every season Fruition hosted a farm party to learn from the hundreds of what they like, don’t like and why. As well as to enjoy tons (literally) of watermelon with everyone. Four seasons later, August Ambrosia is a stable expression of the petite, sweet and prolific oblong watermelon we were all dreaming of.

Brandywise & Summer Sweetheart Tomato
Whether you hope to harvest 10 or 10,000 tomatoes, diseases like Late Blight, Early Blight and Septoria Leaf Spot are affecting your abundance every season here in the Northeast. Though many cultural practices can reduce spread of disease (like growing under plastic and watering soil rather than leaves), sowing seeds with natural genetic resistance to these diseases is perhaps the single greatest thing you can do to increase your success, whether you are an organic or conventional grower.

In response, Martha crossed one of her triple-resistant tomato lines with the quintessential heirloom tomato ‘Brandywine’ to see how well triple resistance and flavor would pair in the resulting F1 Hybrid.

In 2018, the world can now enjoy ‘Brandywise,’ an indeterminate, large red slicer with the best of both worlds: succulent flavor and resistance to Late Blight and Septoria as well as Early Blight tolerance.

Fruition Seeds asked to play with one of Martha’s triple-resistant lines, hoping to find another cross whose fruit that produced another disease resistant hybrid and was uniquely delicious. Fruition fell in love with a cross between Martha’s line and Will Bonsall’s Gardener’s Sweetheart, a heart-shaped red cherry tomato that is exceptionally sweet and creamy. ‘Summer Sweetheart’ is a saladette tomato with handsome ribs ideal for salads, roasting and stuffing with mozzarella.

New Heirlooms
How does a variety become an heirloom?
Think of heirloom vegetables as books and as history.  Books don’t just write themselves. History didn’t just happen, it is happening. Constantly.  For the last 10,000 years humans have been domesticating wild plants and developing ever new varieties of vegetables. 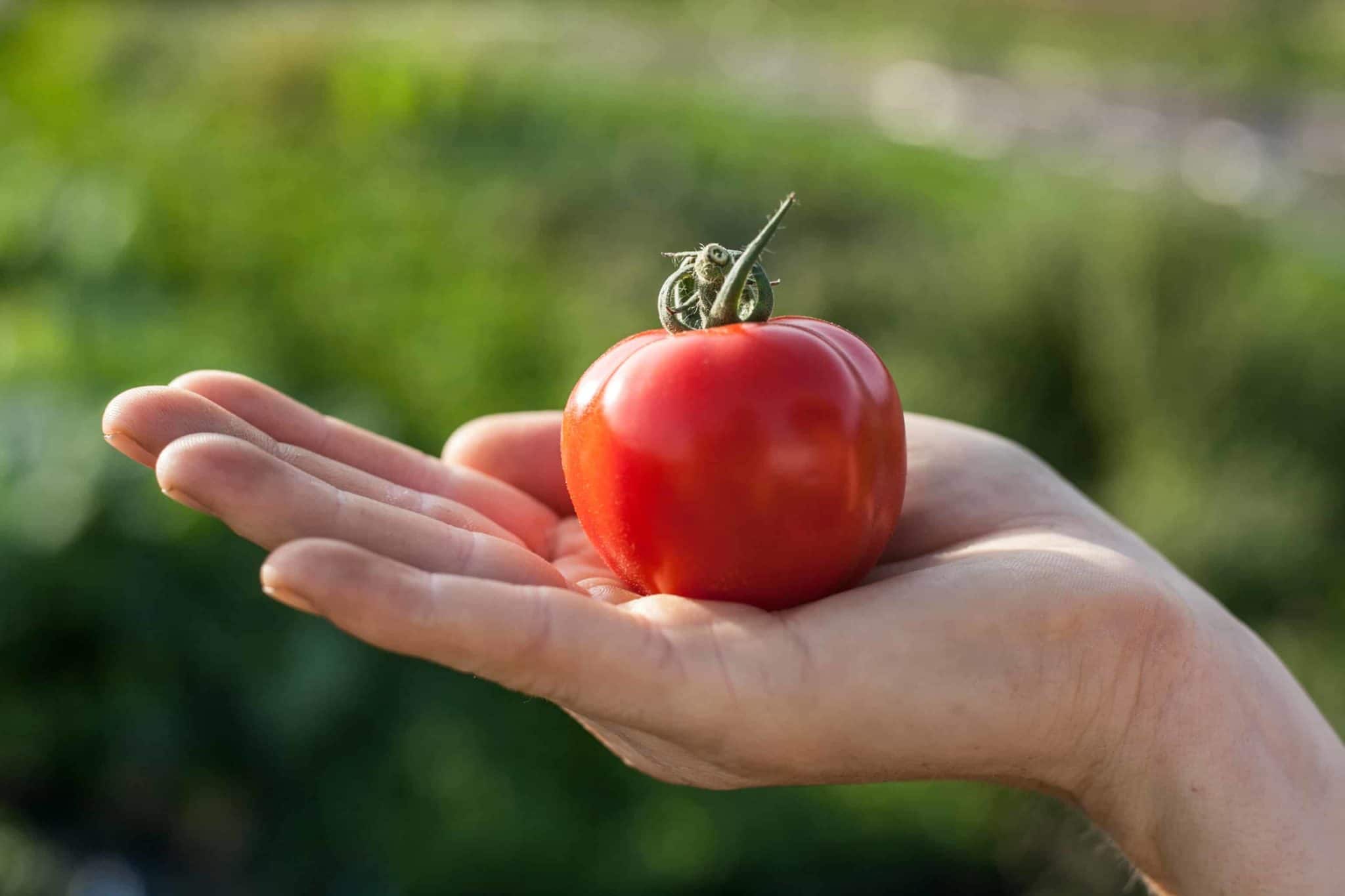 ‘Summer Sweetheart’ is a new variety developed here in the Finger Lakes, pairing flavor with strong disease resistance — a unique combination in 2018. Courtesy of Petra Page-Mann.

Each heirloom begins as a new variety, developed by plant breeders and shared with the world, like a book no one has read. Even Brandywine tomato, one of the most famous heirlooms of all time, started out as a new variety no one had ever heard of. As people grow it season after season, as its ‘pages’ became ‘dog-eared,’ as word and seeds spread of Brandywine, it became part of it’s place and people.  Heirloom varieties, technically speaking, are those whose saved seeds grow true to type and have been grown for 50 years or more.  They often have a particular cultural significance to their place of origin, as well.

By the technical definition, August Ambrosia watermelon will be a Finger Lakes heirloom in 49 years, year 2067, as it is grown and loved as well as seeds saved and shared.  So many people helped it come into existence and we all play a role in it becoming a beloved heirloom for all generations to come.

Also by definition, Brandywise and Summer Sweetheart tomatoes will never be known as heirlooms, no matter how many generations they’re grown and how well their loved because, as F1 Hybrids, their seeds can be saved but will not grow true to type.
They both play critical roles as we learn to feed ourselves and each other in our constantly changing world.

As the climate changes, it is increasingly vital that we think new thoughts, write new books and develop new vegetable varieties. Simply by the act of eating every day you are a part of these shifts, whether or not you sow a single seed in your life. The visionary collaborations and emerging new varieties here in the Finger Lakes offer hope that we are capable of creating heirloom-worthy foods and stories for future generations.

Growing up in her father’s garden in the Finger Lakes of New York, Petra believes each seed and each of us is in the world to change the world. In 2012 she founded Fruition Seeds to share the seeds, knowledge and inspiration gardeners need to be more successful in the Northeast.  Don’t hesitate to strike up a conversation by contacting her at petra@fruitionseeds.com
Posted in Small Farms Quarterly