Minority Landowner Magazine is a national publication that highlights the stories of minority, limited resource, and social disadvantaged farmers, ranchers, and forest landowners. The mission of the magazine is to support landowners to improve productivity, increase profitability, and maintain ownership of their land. 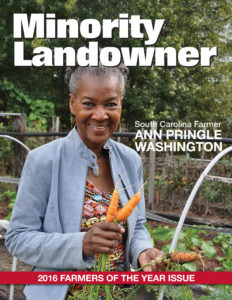 The magazine was founded in 2005 by Victor Harris, a forester with previous appointments in North Carolina and Virginia. In addition to the magazine, he helps organize conferences and educational events in various locations, often in partnership with NRCS and extension offices.

Victor encourages those who work with farmers and landowners to think outside in the box. In a 2016 interview with the National Association of Conservation Districts, he said, “If the landowners you reach are not a diverse representation of your district, then ask the question, “Why?” Often the simple but not always accurate answer is, “There are no minority landowners in my district.” Dig a little deeper into the question and ask: Do I send out press releases to the same newspaper and radio outlets I’ve always used? Do I hold landowner meetings at the same restaurants, churches, and community centers that I’ve always used? … Seek to expand your outreach efforts and once you connect with minority landowners, both in rural and urban settings, you’ll find they seek the same technical and financial assistance and guidance as non-minority landowners.”

In addition to regular issues there is an annual “Farmers of the Year” issue where features are requested from state and federal forestry and agriculture agencies, community-based organizations, universities, non-profits, and others who work with farmers and landowners. This is an opportunity to showcase farmers who are doing great things in their community by representing good agriculture and land stewardship.