In Search of a Peasant Culture in Upstate New York

“Pheasants? I love pheasants!” This was just one of many disbelieving reactions I got when I told people I was trying to find traces of a peasant culture around Ithaca, NY.

As a student at the University of Natural Resources and Life Sciences, Vienna (Austria), I was able to visit many small mountain farms in the Alps of Austria and Italy. Many of these farmers proudly referred to themselves as peasants, partly out of tradition, partly to express their opposition to more industrialized farms in the valleys and plains. Back at the university, I learned that sociologists like Alexander Chayanov or Jan Douwe Van der Ploeg defined peasant farming as a sustainable, community-oriented way of farming that was distinctively different from capitalistic as well as socialist agriculture. While that culture seemed to be thriving and alive in the highly developed countries of Austria and Italy, the peasant study literature seemed to be silent about a different one: The United States of America. 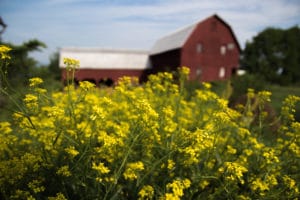 While often awkward to make use of, many farmers around Ithaca value the old barns on their farmsteads. (photo: Johann Strube)

In the spring and summer of 2015, I partnered with the Department of Development Sociology at Cornell University to conduct a study to see whether I could find any similarities between the alpine peasant farms that I knew, and the farms around Ithaca, NY. I found many. All farmers that I talked to worked the land because of their love for that lifestyle. For some, having access to fresh and delicious food was a main driver to become a farmer. Others valued the possibility to work outside, alongside the people they loved. Providing for others was also mentioned as a motivation. Many regarded the agrarian lifestyle as the “good life.” In fact, most farms grew food for themselves and their families, and additionally sold or traded food, goods and services.

In contrast to the idea of self-sufficiency, the interviewed farmers valued the possibility to meet each other’s needs collectively instead of individually (this concept has been called co-sufficiency). For example, the farmers’ markets in the area abound with trading among the vendors, beyond the sale of farm products. Vegetable farms trade produce for meat, or a prepared meal for some fruit. A grain farm traded cover crop seeds for a CSA-share with a vegetable farm. It is common for farmers around Ithaca to help each other out when they can. Often, older and more experienced farmers share their knowledge with new farmers. Many farmers try to use cropping systems that conserve the soil and water to preserve it for future generations.

This strong orientation towards the well-being of the community and nature are characteristics that social scientists associate with peasant farming. Yet, while most interviewees of the study respected peasants and their ways of farming, they did not see how their modern cultivation practices could have anything to do with peasant farming. The farmers highlighted the need to make money and to engage in the capitalist economy as reasons why they did not have anything to do with peasant agriculture. For many, the term peasant has a derogatory ring to it, which seems to be the common understanding in modern English.

This situation left me with a dilemma. On the one hand, I saw these farms doing very similar things that peasant farms in other parts of the world were doing and that social theory would classify as peasant economy. On the other hand, I wanted to respect the will of my research participants to not be identified as peasant farmers. And it is true, most farmers that I visited also produce commodities to sell in exchange for money, often using the latest technologies on an industrial scale that is quite different from peasant farming. 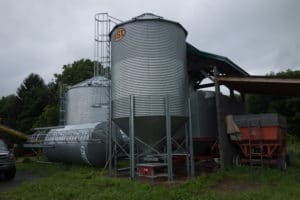 Pockets of peasantness might look very different than cliché postcards of peasant villages and farms across the world. (photo: Johann Strube)

Here is the solution to my predicament: None of the farms engaged in industrial farming and money-based commodity markets because that is what they ultimately wanted to do. In the United States (as well as in Europe), financial capital is needed in order to gain access to the means necessary for farming: land, seeds, fertilizer, fuel, buildings, equipment, and labor. Even a fully self-contained farm that produces its own seeds and fertilizer, owns all its farmland, and runs entirely on family labor has to make a profit to pay property taxes, education for their children, and other expanses. Under these conditions, making money is not an expression of narrow self-interest and growth-orientation, but a necessity imposed by the capitalist economic environment.

Many farmers try to resist this dependency on the market by establishing an alternative economy that is focused on satisfying people’s real needs, including the need to be able to continue to farm in the future. This alternative economy comprises the aforementioned informal trading economy, the reciprocal help, the mentoring, and soil-improving cultivation practices that build up the resource base for more independent farming. The sociologist Jan Douwe van der Ploeg calls this process repeasantization. From his perspective, peasantness does not mean poverty and drudgery, but self-determination and independence. Despite contradictions that evolve from having to operate in the capitalist economy, the farming community around Ithaca abounds in these pockets of peasantness, even though they might look very different from the cliché postcards of peasant villages and farms across the world.

Consequently, none of the farmers around Ithaca may be a peasant, but neither are they fully capitalist entrepreneurs. Instead, they are farmers who juggle their operations between peasant values of equality, community, reciprocity, and sustainability on the one hand and the constraints of the capitalist environment on the other. Instead of accusing farmers of any scale for unsustainable farming practices, we should try to understand what economic constrains force them to operate in ways that are often in conflict with their inner goals.

Read more about small-scale agricultural producers on the Institute for Landscape Planning.

Johann Strube graduated in landscape planning and landscape architecture from the University of Natural Resources and Life Sciences, Vienna (Austria). Now, he is a PhD student in Rural Sociology at Pennsylvania State University. His research focuses on subsistence-oriented livelihoods like peasant farming or indigenous land-use practices in developed countries in Europe and North America. He is also a passionate bread baker, yogurt maker, and musician. He can be reached at jcs80@psu.edu.
Posted in Small Farms Quarterly