Maintaining and improving soil health and fertility in a high tunnel is difficult and demands an analytical approach.

by Andy Fellenz
My first introduction to high tunnels was in 1998 at an organic farming conference, when I was still a wannabe farmer and knew little about farming.  I eagerly absorbed the presenter’s message on high tunnel soil health and fertility management, which in summary was, “a little compost is good, more is better, it is probably impossible to have too much and soil tests won’t really tell you much.”  Fast forward to 2004, and I had two whole years of farming (well actually, closer to glorified gardening) experience and had erected my first high tunnel – a 26X96 Quonset. For the next few years I continued to add and sometimes subtract tunnels until in 2012, when I had six tunnels at the farm: three 30X96, two 26X96, one 20X48, and three small greenhouses to supply transplants for the high tunnels and field; I was also working to expand my selling and growing seasons to twelve months. 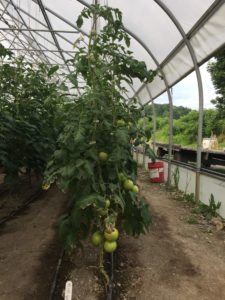 Soil testing established a baseline for where my soil was in terms of nutrients before the tunnels were constructed.  Soil pH was in the mid sixes; Calcium was high, greater than 3,000 lbs/acre; soil organic matter was relatively low, at approximately 2%; and other nutrients were within normal ranges.  Since a little compost was good and more was better, and because I wanted better soil for the intense growing I planned to do in my tunnels, I added a lot of dairy-based compost and fertilized with a poultry litter compost.  A subsequent soil test about two years later showed pH climbing close to 7, significantly more calcium, higher organic matter, and other nutrients ranging from optimum to high levels.  With the exception of calcium levels and soil pH, I thought I was on the right track and continued compost applications and the use of a composted poultry litter as a fertility amendment.  Two years and another soil test resulted in a soil pH level greater than 7, calcium even higher than before, and all of the nutrients in the high to very high range.  These results were definitely not good, especially the high pH which suggested that plants might be having a hard time taking up nutrients from the soil.
Across my six tunnels, I was happy that organic matter continued to increase, my soil pH’s were above 7, calcium was around 10,000 lbs/acre, and the other nutrients were almost all in the very high range. However, I was approaching a tipping point – a point where the soil chemistry was going to significantly limit crop quality and yields.  The “a little is good, more is better” approach – especially with compost, the Alfred E. Neuman, “what, me worry?” approach to soil testing, and a laissez-faire approach to nutrient management – turned out not to have been a good one.
It was time for a change and some education – what was I doing that was causing my soil chemistry to change so rapidly, and what would I need to do to get things back in balance?  Enter Jud Reid, and the Cornell Vegetable Program.  I had been a cooperator with Jud on a previous high tunnel project looking at natural pest control methods for extended season growing – trialing parasitoid wasps and other biocontrols in the tunnel to control pest insects – and had mentioned to him my concerns regarding soil health and fertility.  It turned out that my farm was not the only farm facing nutrient challenges; Extension, with support from the New York Farm Viability Institute, began regular soil and foliar testing at farms across the state to see what farms were experiencing. 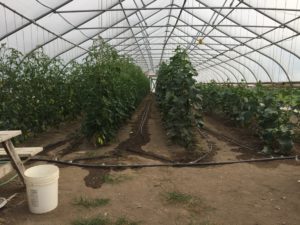 I was embarking upon a remediation effort, rather than just updating my fertility program.  It was also apparent that my previous management scheme had been woefully ineffective and that I needed to pay more attention to soil testing and the expected nutrient demand for the crops I was growing; I had to consider the impact of everything being added to the soil.  What I needed was to turn the ship around and get my soils back in balance.
What was also needed was the recognition that growing in a tunnel is significantly different than growing in the field, and that the tunnel is a much less forgiving environment than the field.  An early epiphany was realizing the impact that irrigation water had on my high tunnel soil.  The tunnels never saw rain, were rarely flooded (flooding only occurred when someone forgot to turn off the water or a timer failed), and if drip irrigation was being used, portions of the tunnel would be as dry as a desert for months. I irrigated with well water, which in my case was very difficult, and the minerals in the water (especially the calcium) were having a measurable impact on my soil.
So, what to do?  Three things were changed – since my irrigation water tended to increase the soil pH, I began to acidify the water and added sulfur directly to the soil to decrease its pH.  An injector, a 275-gallon stock tank, and several hundred pounds of citric acid each season enabled me to neutralize my irrigation water.  An annual springtime application of sulfur to the soil (when the soil biology is conducive to reacting with the sulfur) has helped to stabilize acidity, and hopefully will reduce the soil pH in the future.  I also replaced annual additions of compost with peat moss.  The peat moss is acidic, which helps to reduce soil pH and has stable organic matter, which improves my sandy loam soil’s water holding capacity and soil tilth. 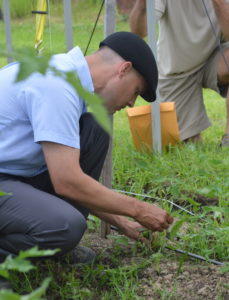 For nutrients, I shifted from a composted poultry litter (which had significantly increased phosphorus levels in the soil and also had increased salts) to elemental amendments which emphasized nitrogen, the only primary nutrient which was in short supply.  Bloodmeal was used to provide immediately available N, and Feathermeal, which releases N through biochemical activity in the soil, was used as a slow-release N source.
Soil nutrient levels in my tunnel soils are stabilizing, but it will be a long road to return them to normal and healthier levels.   I’ve realized the value of annual soil tests and recognized that a high tunnel environment is very different from a field and needs to be managed much more precisely. The next frontier is making effective use of foliar testing to allow for in-season tweaks, especially for the times when the crop’s nutrient requirements can exceed the soil’s capacity to deliver those nutrients.
My farm’s high tunnel experience has unfortunately been duplicated on many farms across the state.  Sometimes the only possible correction is to move the tunnel and take the affected area out of production for a few years. Other times, it may be possible to correct the soil’s nutrient profile.  In work supported by the New York Farm Viability Institute, Cornell Cooperative Extension and NOFA-NY are working together to identify real-world best management practices that will enable farms to maintain soil health and fertility in their high tunnels over the long haul.  A large data set from soil and foliar testing at 15-20 farms/year for the last five years, along with production histories in the tunnels, will support development of farm-focused best management practices.  As the NOFA-NY leads on this initiative, I am excited to be working with Jud Reid, Cordelia Machanoff, Amy Ivy, and Teresa Rusinek from Cooperative Extension on this initiative, and really appreciate all of our cooperating farmers.
Andy is a 2nd career farmer who recently embarked on a 3rd career with NOFA-NY as their Organic Fruit and Vegetable Coordinator.  Andy has grown in high tunnels since 2004 and has been a cooperator on many Extension high tunnel research projects.  He is particularly interested in identifying organic practices which facilitate profitable long term high tunnel soil health and fertility.  He can be reached at andy@nofany.org, or andy@fellenzfamilyfarm.com.