Home » Posts » Efficient Use of Cover Crops at the Food Farm

Efficient Use of Cover Crops at the Food Farm

by Brian Caldwell and Ryan Maher

Janaki Fisher-Merritt grew up on a pioneering organic vegetable farm.  Janaki’s parents, John and Jane Fisher-Merritt, started The Food Farm in northern Minnesota in 1975.  They moved to their current location in 1988, became certified organic in 1990, and started the first CSA in the Duluth area in 1994.  The size of the operation hovered around 6 acres until Janaki actively joined in management in the mid-2000’s.  Janaki and his wife, Ann Dugan, bought the farm from his parents in 2010.  The farm now produces about 13 acres of vegetables, with roughly the same amount of land in cover crops.  Farming partner Dave Hanlon manages their two greenhouses and five hoophouses plus transplant production, and they hire three interns each season.  About 2/3 of the produce goes to summer and winter CSA shares.  The rest is sold to local co-ops and restaurants.  The Food Farm also produces chickens, turkeys, and eggs.
The farm’s fields are flat.  Early on there were some drainage issues, but a series of ditches solved that problem fairly well.  However, fields still tend to be somewhat wet in the spring.  The main obstacle to successful vegetable production is the short, cool season.  The hoophouses and greenhouses help with that, and their excellent winter storage root cellar lengthens the marketing period.  Outdoor crops are chosen based on their adaptation to the cool climate and short season.  In fact, Janaki is saving seeds from plants that do particularly well in an effort to select them even further.
Crops are managed by the field rather than individual beds.  However, since the fields are fairly small (less than 100 feet wide and 300 feet long), tractor wheel traffic is somewhat controlled.  Janaki’s primary tillage tools are a 7-foot tractor-mounted Falc rototiller and Falc Toro spader.  These cover the tractor’s width, and allow for passes about 72 inches on center to create planting beds.  He uses a 10-foot Lely Roterra power harrow, which can run at a shallow depth of 3-4 inches, for some tillage operations like cover crop incorporation.  Two tineweeders, 6 feet and 20 feet, are used for stale bedding (killing small weeds in a seedbed just before planting), cultivating, and working in broadcast small cover crop seed.  He also uses up to four Yeomans Keyline shanks to subsoil his fields, and a 7-foot wide flail mower to handle cover crops.  Field irrigation is accomplished with traveling guns.
Janaki is committed to good soil husbandry.  After college, when he was working into farm ownership, he felt the farm needed to make cover cropping more of a priority.  His parents gave Janaki wide latitude to improve farm methods, and he made time to experiment with ways of using more cover crops to improve the soil.  Those efforts were very fruitful, and resulted in several novel practices now used at the Food Farm.  Growing cover crops for green mulch, or “cut and carry” mulching, efficient interseeding, growing cover crops in hoophouses, using mustard as a biofumigant, and more came out of that period. We focus on a few of these practices here.

Reduced tillage practices take many forms. This story is the 6th in a series featuring organic vegetable growers that have adopted reduced tillage practices on the way to greater farm sustainability. Experienced growers at diverse scales are tackling weeds, managing rotations, and integrating cover crops while minimizing soil disturbance. Look for past and future SFQ issues to learn the practices that are helping these growers build better soils. Visit the Small Farms Reduced Tillage Project webpage or contact Ryan Maher of the Cornell SFP for more information on this project, ryan.maher@cornell.edu.

Cover cropping for succession plantings
A CSA farm grows a wide variety of crops, often with multiple planting dates.  Thus, the rotation is often flexible, and a given crop may be grown several different ways, depending on the part of the season during which it is planted.  Broccoli is an important crop at the Food Farm.  It does well in the cool conditions, and succession plantings are made from early spring through July.  Janaki’s varied cover crop practices for this crop illustrate the care he takes of his soil.
Early broccoli often follows a winter-killed cover crop, such as buckwheat and crimson clover.  This is tilled in with the spader and given a heavy dressing of compost.  After 2-3 weeks, a tineweeder pass kills small weeds. Then Janaki uses a water wheel transplanter to set the broccoli transplants, two rows per bed, 6 feet on center.  Thirty-foot-wide row covers, which are removed and replaced for cultivation, are placed over all early brassica plantings until July.  After harvest, early broccoli plantings are tilled under and cover crops are planted.
Later plantings often follow the termination of yellow sweet clover/hairy vetch cover crops.  The covers are flail mowed, then rototilled in after a light application of compost.  Yellow sweet clover may host cutworms, so two to three weeks is allowed before tineweeding and transplanting.  After the main head harvest, winter rye is broadcast over the crop.  It is incorporated with a hand hoeing, which follows right away.  Harvest of side shoots may continue late into the season as the cover crop grows, particularly from varieties such as Bellstar, Imperial, and Arcadia.
The last plantings, grown without row cover, receive a tineweeding two to three weeks after tillage, then are transplanted.  When the broccoli plants are 6-8 inches tall, Janaki broadcasts rye and runs the tineweeder over them again to kill weeds and incorporate the cover crop seed.  After harvest, the rye continues growing.
Cover crops thus grow after all broccoli plantings, even though harvest may extend late into fall.  This coincides with Janaki’s goal of having green plants covering as much land as possible over winter and spring, soaking up valuable nutrients and protecting the soil. 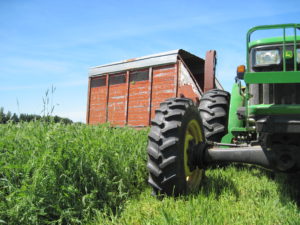 Chopping rye and vetch cover crop into a self-unloading wagon.

Cut and carry mulching
Janaki uses cover crop fallow periods to take land out of production and build his soils. Some of these cover crops are utilized during following season in a unique cut and carry program.  After they’ve put on significant growth in spring, wheat and vetch or rye cover crops are chopped with an old dairy forage chopper and blown directly into a self-unloading wagon.  The moist “greenchop” is then unloaded from the side of the wagon alongside tomato plantings, or directly into hoophouses through their open ventilation sides.
The green mulch is then spread with forks around the crops.  Janaki has not had problems with off-gassing from the fresh residues, which other farmers have found to sometimes damage tender crop plants.  The timing works well for both hoophouse and field tomatoes, since the cover crops are ready to chop from May through June.
Positive aspects of the cut-and-carry system include: 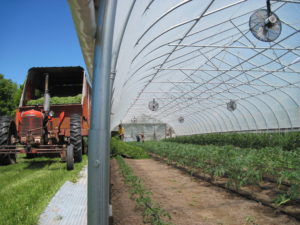 Janaki’s field tomato transplants are large, grown in 4” pots to get off to a fast start.  Field prep includes tilling and tineweeding twice.  Just before the second tineweeding, Janaki broadcasts perennial ryegrass and Dutch white clover.  In fact, if he is going into a field of winter rye that was planted late in the previous fall, he will skip tillage altogether and simply broadcast these covers directly into the somewhat sparse rye.  The tineweeder goes over everything, and a ryegrass/clover + rye cover crop is established without spring tillage.  Then he subsoils down the rows with a Keyline plow; after adding a heavy dose of compost in the slot, he rototills with a hand tiller, and transplants are put in by hand.  Thus the tomatoes and ryegrass/clover pathways are established, but the soil is bare next to the tomatoes.
The plants are hand-hoed one or two times, and then mulched with green cut-and-carry material in mid to late June.  Mulching waits until the soil has warmed and the tomatoes will soon be trellised. The green mulch is unloaded along the edge of the field, and then distributed by hand into a 6-inch high layer around the plants.  This happens 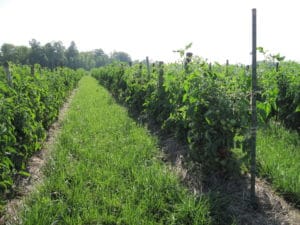 in a roughly 2-foot-wide swath down the crop row, but the 4 feet of ryegrass and clover between the rows continues to grow.  Note that by planting the ryegrass/clover cover crop first and then mulching, the problem of a strip of weeds next to the mulch is eliminated.  This weed strip often bedevils growers who mulch first, then seed their pathway cover crop.  But in Janaki’s case, the ryegrass and clover grow right up to the mulch.  As the season progresses, the grass/clover pathways are mowed 3-4 times.  No other weeding or fertilizing is done.  After harvest, the ryegrass and white clover strips are left in place and sometimes used again the following season, with a different crop in between. 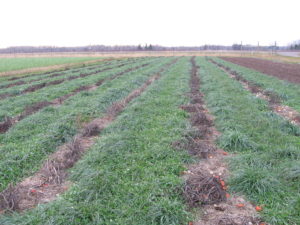 The soil is protected after tomato harvest.

Janaki notes that paying attention and observing are critical to success on any farm.  Take the time to experiment.  What works for one farmer may not work for another.  There are always tradeoffs—for instance, the tight management required for some of these cover crop practices may save farm crew labor and be best in the long run, but may require extra effort by Janaki during peak periods.
Constant but targeted experimentation is important to the success of the Food Farm.  “Experiments are inherently inefficient.  Carve out enough time to really pay attention to it.  Write things down.  Really observe and evaluate.  One year of success or failure is not enough.”  He warns beginning farmers not
to go whole hog into an experimental approach.  Experiment on a small part of a field: observe, tweak, repeat.  “Do mostly what other successful farmers in your area are doing.  Experiment on the side, not with your whole farm.”

Brian Caldwell and Ryan Maher research reduced tillage for organic vegetable systems at Cornell University. They can be reached at bac11@cornell.edu and ryan.maher@cornell.edu, respectively.