by R.J. Anderson
Cornell Cooperative Extension’s (CCE) Fay Benson and his colleagues in the Cornell College of Agriculture and Life Sciences (CALS) can talk all day with farmers about why healthy, properly managed soil is vital to field and land sustainability.
But recently, they’ve found it more effective to actually show people why practices such as cover cropping and no-till farming are so effective at preventing runoff, controlling erosion and locking in important nutrients to stimulate important biological and chemical reactions in soil. 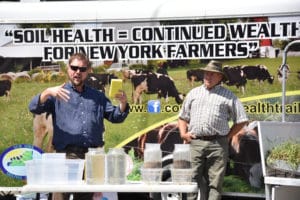 This summer, Benson, a member of CCE’s South Central New York Dairy and Field Crops team, traveled throughout New York state hauling the New York Grazinglands Coalition Soil Health Trailer, a rolling lab equipped to provide demonstrations about the value of healthy soil while illustrating the dangers that can lurk both above and beneath.
Accompanying Benson on several trips – which included farm visits as well as large-scale farming and community events – were various members of the CALS Cornell Soil Health Team. “We presented at 25 events and reached over 1,000 participants,” says Benson. “As events were held and articles appeared online and in local newspapers about the trailer, I began receiving request after request from all different types of sources. I knew interest in this topic would be pretty good, but I did not anticipate this type of response – the original grant only required taking the trailer to three events per year.”
Funded by a grant from the Natural Resources Conservation Service of the U.S. Department of Agriculture, the solar-powered trailer has a self-contained water supply and is equipped to conduct a number of demonstrations, testing elements that impact and traits that comprise healthy and unhealthy soils. Highlighting the offerings is a six-foot-tall rain simulator that illustrates how rainfall affects various types of soil, from a bare medium to one that is sowed with cover crops. Beneath each soil section sits a pan that captures runoff, revealing how well or how poorly the soils retain rainwater. Other tests look at the ability of different soil types to maintain structure and resist erosion.
“Through these exercises, it becomes pretty evident pretty quickly that runoff and infiltration rates are much more favorable with a covered soil,” says Benson. “These bird’s-eye comparisons provide an important tool for revealing a soil’s water-holding capacities and how sound soil management can improve crop yield and a farmer’s bottom line.” 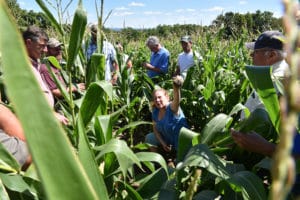 Showing the impacts of soil practices instead of just talking about them, Benson said, makes the educational content much more accessible. Whether demonstrating for a gathering of crop farmers or a group of 4-H sixth-graders, the educational delivery system is neither too complex nor too simple.
“I received a lot of post-event feedback commenting that farmers are familiar with terms like aggregate stability of soil, biological cycling and water infiltration, but that seeing those concepts in action adds a different level of learning,” Benson said. “As hands-on people, farmers tend to be more visual learners and they were completely engaged during our sessions.
“One workshop we did for the Hudson Valley Farm Hub was attended by a large number of Hispanic workers,” Benson continues. “Afterward, the Farm Hub manager emailed me saying he and his workers appreciated the way the information was presented since it was so straightforward and didn’t require much translation.”
Augmenting the visual demonstrations are the Cornell Soil Health experts, who provided expertise at the events. Soil Health Lab Manager Robert Schindelbeck and Aaron Ristow, the soil health program coordinator, attended a handful of on-farm workshops.
“They followed along with the physical demonstrations and provided expert commentary on soil fundamentals and the chemistry taking place,” Benson said. “In addition, I had other CCE educators presenting alongside me at more than half of my events. They were able to add real-world expertise to the discussions.”
With another year of funding left, Benson is excited about the future of the Soil Health Trailer. He’s pursuing more grants and is in the process of training other CCE educators to conduct the demonstrations.
“My hope is that the trailer will become a resource that can be passed around and used by extension all over the state,” he said. “From what I’ve seen, there’s a definite need for this type of educational tool. Today’s farmers and landowners are sharp folks who want to learn more about soil health and what management practices they can pursue to protect their land and environment.”
R.J. Anderson is a staff writer/communications specialist for Cornell Cooperative Extension.