by Bill Wilson
Mine was not a boyhood in deeply rural America. I was born and raised in the northeast corner of New Jersey, in Bergen County.
In what is now one of the most densely populated areas of the U.S., we boys and girls of the 1950s enjoyed a freedom and natural abundance in our patch that seems impossible today.
One of the best parts of that life were local farms and the wild things on them. We saw white-tailed deer and red and grey foxes—spooky, careful and not abundant—squirrel, rabbit, possum, raccoon, skunk, woodchuck and muskrat aplenty. Occasional mink and weasel. Snakes, toads, frogs, salamanders, box turtles, wood turtles, and in clear, cold brooklets that flowed down from the Palisades on one farm, impossibly beautiful tiny brook trout. And lots of birds. Before DDT really struck and suburban development exploded, our county was full of birds. Wood thrush song filled the woods throughout spring and early summer, bluebirds, American robins—then fully migratory—cardinals, brown thrashers, migrating and nesting warblers, flashes of scarlet tanager, swallows, and on and on. Peregrine falcons still nested on the Palisades. No wild turkey, but ring-necked pheasant year round, and woodcock in season were a constant. Bobwhite quail and ruffed grouse were not plentiful but there if you knew their spots.
The farms around us were all small and most raised vegetables and fruit for farm stand sale, export to the commercial markets in New York or, in the case of apples, for making cider. A few were not really farms but estates with horse pasture, some hay and small kitchen gardens. We did not look for exotic or rare birds, but it was on the farms that we most often saw the unusual—at least unusual for us. An exciting goshawk late one fall, a snowy owl sliding through a wood lot one January, waves of common nighthawks over ripened corn in late August evenings, ruby-crowned kinglets bobbing on spent raspberry thickets in November and, on one occasion, an eastern meadowlark classically posed on a rock in the middle of a lightly used pasture.
There were fewer farms each year. Now there are just two left in my old territory. As development and DDT took hold, much of the abundance we took as normal began to disappear. By the late 60s it was all but gone and so was I, an urban dweller for the next four decades, but lucky enough to visit rural and wild places regularly. As time passed and family farms disappeared at an alarming rate in America, my thoughts frequently went back to these wonderfully pleasant places of my youth. And my sad thought was that the small family farm is now all but gone. 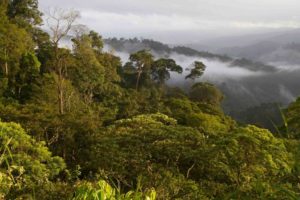 So when, in 2009, we started a Bird Friendly® coffee business and I visited farms in Latin America where our coffee comes from, I was struck by the extraordinary bird life and natural abundance on these coffee farms. Different habitat, different flora and fauna, different history, culture, and languages, but somehow many of the same enchanting attributes of family farms in the 1950s back home. The connector, beside the commerce of coffee, was the presence in our winter of many of my boyhood birds. Inspecting a coffee plant nursery and coming face-to-face with a male rose-breasted grosbeak was almost as exciting as any birding experience can be. Mixed flocks of orioles and warblers, furtive wood thrushes without their spring song, hummingbirds galore, and western birds such as scissor-tailed flycatchers and western tanagers that, in my boyhood, existed only in books are as casually present as the bird bounty of my youth.
Underlying all is the honest environmental stewardship of the family farmers that tend the farms, some families growing coffee for over 150 years. While coffee is the cash crop, fruits, vegetables, chickens and a few cows and horses round out the scene. The exotic wild birds, orchids, shrubs, first growth trees, reptiles, amphibians, butterflies, and bees of the tropics mixed in with occasional jaguar, sloth, and howler monkey—existing in complete harmony with the farms—form a tapestry of sustainability that is exhilarating.
Contrasting with these organic farms carrying the Smithsonian Migratory Bird Center’s certification, the “sun” coffee farms of big agricultural enterprise are bereft of almost all the plentiful and varied wildlife found on our coffee farms. 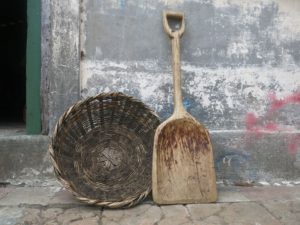 We sponsored scientific surveys on the coffee farms we buy from to “certify the certification” for ourselves. Confirmation: The surveys conducted on farms that supply Birds & Beans Coffee found more than 130 species of birds, including vireos, thrushes, flycatchers, tanagers, and orioles. The survey teams also found several warblers, including high numbers of Tennessee, chestnut-sided, black-throated green and Wilson’s warblers, as well as golden-winged warblers—a candidate species for endangered listing in the U.S. More than 30 species of neotropical migrants and more than 100 indigenous species of birds share the farms we covered.
This led me to think about U.S. farms and bird conservation. My admiration for the family farmers in the more than 1,800-member Organic Valley co-op led to us sponsoring late spring surveys matching those we had done on the coffee farms in winter. Another set of great results.
Many of the same migratory species from the Latin American bird surveys also showed up in on Organic Valley dairy farms in the Midwest and East that found more than 50 at-risk breeding bird species. Specific species found in the Organic Valley surveys included indigo bunting, American redstart, and 12 Baltimore orioles on a farm in Minnesota; breeding tanagers, orioles, and buntings on a farm in Ohio; four species of neotropical migrants that winter in coffee farms—black-and-white, Blackburnian, chestnut-sided, and black-throated green warblers—on a farm in Vermont; and an unexpected treasure trove of 22 indigo buntings, along with tanagers, orioles, and wood thrush in North Carolina. Importantly, these farms are also all virtual sanctuaries for grassland birds of great conservation concern, including grasshopper sparrows, eastern meadowlark and bobolink. 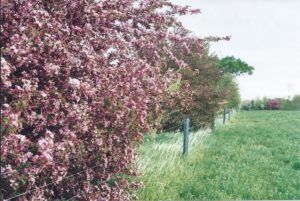 What makes the Organic Valley farms so attractive to birds is that they are unlike the eco-deserts of big agriculture’s mono-crop farms. The buffers strips, hedge rows, ponds and wood lots on these farms provide the bio-diversity that birds need to survive and thrive. Indeed, these conditions are central to the health of the Earth we all share.
The Bird Friendly coffee and organic dairy farms surveyed and those with similar certifications provide extremely valuable habitat for neotropical migratory songbirds at both ends of their range. Some of our most vibrant and beautiful birds are getting a conservation boost at times of the year when they most need it. Sustainable farming is good for birds, farmers, workers, and the environment we all cohabit.
If North American consumer trends of increasing consumption of organic food and beverage continue, we may truly be headed back to better days of family farms that support the natural world as well as the marketplace.
There is no official certification for coffee labeled as shade-grown; indeed, some coffee with shade-grown on the packaging is grown under banana trees to which artificial fertilizers and pesticides are heavily applied. The official Bird Friendly® certification from the Smithsonian Migratory Bird Center combines USDA Organic standards with requirements for forest shade cover, multilayered canopy, and the presence of mosses and orchids growing on the trees. While still a small factor in the coffee market, Bird Friendly coffee is showing very strong year on year volume growth
Significant growth in U.S. organic dairy acreage is also a hopeful sign of the future. As overall organic farm acreage in the United States has doubled since 2003, a significant portion of that growth has been driven by the popularity of Organic Valley dairy products. In 2014, Organic Valley dairy farms constituted about half of all organic farm acreage in Ohio, Vermont, and Wisconsin, and about a quarter of all organic farming acreage in Minnesota, New York, North Carolina, and Pennsylvania. In Indiana, Organic Valley dairy farms account for more than three-quarters of total organic farming acreage.
These farms and the other farms and ranches providing organic food in a truly sustainable manner may form the basis of a new food system. Change driven by farmers dedicated to true sustainability, by the CSA and farm to table movements and by consumer demand for better food that is safer for families. Sustainable ‘Bird Friendly’ farming turns out to be good for us all and for the Earth we all share.