by Ulf Kintzel
As announced in my last column about orchard grass as my preferred grass species in my sheep pasture, this issue I will talk about my preference for legumes.
In my view, having legumes in your pasture is essential for a sustainable pasture-based sheep operation. It reduces the need for nitrogen fertilizer greatly due to their ability to utilize air nitrogen with their bacteria (Rhizobia) attached to their roots. In fact, I do not apply any commercial nitrogen. In addition, many legumes are often highly nutritious and digestibly. The percentage of legumes in the pasture should be no less than thirty percent. Much of my pasture exceeds this mark. Fifty percent of clovers is quite common at White Clover Sheep Farm.
Legumes like alfalfa, white clover, and red clover bring a different set of challenges with them because they can cause ruminants to bloat and die. Birdsfoot trefoil is the exception to it since it is none-bloating. However, the answer to dealing with bloat is not avoiding or getting rid of legumes.
If you have been successful in growing a strong stand of birdsfoot trefoil in your pasture and grazing it has not reduced it, I have only one word to say to you: Congratulations. I have no further advice for you. Personally, I have not been successful in keeping it around, although I started out with strong stands in some of my reseeded sheep pastures. With the exceptions of those fields that get mostly hayed and rarely pastured, my stands of birdsfoot trefoil have always been fading. Because of that and because of the high price of the seed, I have basically given up on it.
Alfalfa is, in my view, not a suitable legume for grazing. Most varieties do not withstand close grazing. Alfalfa loses its leaves the moment some killing frost hits and therefore does not stockpile well. In addition, the seedbed preparation for alfalfa is rather cumbersome.
There are some rather exotic legumes like Kura Clover but I would stay away from the likes of it. I tried but would rather go with what is promising easier success and is proven. That leaves us with red and white clover. Red Clover is said to cause infertility in sheep when grazed during breeding season. I have not found that to be true. Red clover has many favorable attributes, among them its high yield, its ability in growing at a lower pH, its drought tolerance, and its high digestibility. There is one big downside to red clover: it is a bi-annual and needs to be re-seeded frequently. Longer lasting varieties seem to promise more than they actually keep. That is at least my experience.
That leaves us with white clover. It is by far my most favorite legume. The name of my farm must have given that away. White Clover is both high in protein and energy. It is highly digestible. It is very well liked by sheep. It is very persistent.
When hearing about white clover, some of you may think of the Dutch white clover that grows in lawns, which is low growing with small leaves and a low yield. That is not the white clover I am referring to. There are several varieties of New Zealand grazing white clovers, which are much more erect, have larger leaves, and yield considerably more than Dutch white clover. 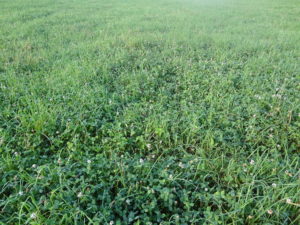 White Clover variety “Huia”, recommended from my friend Douglas from down under.