by Brian Caldwell and Ryan Maher

Lisa and Ralph Turner started growing vegetables for sale in 1997 near Freeport, Maine on 1/5 acre.  The farm is now up to 15 certified organic acres.  They have summer and winter CSAs and deliver to over a dozen restaurants.  Over the past 19 years, the operation has gone through many changes, as they “strive to continuously improve our farm infrastructure, equipment, and practices”.  Lisa and Ralph are constantly re-evaluating their methods and equipment.  Their path to a permanent bed growing system illustrates their very creative and responsive management style. 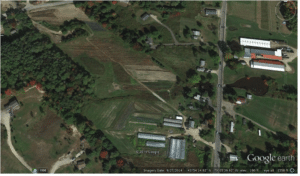 The summer of 2009 was very wet in coastal Maine.  Rainfall in June and July was more than two and a half times the average.   For Laughing Stock Farm, this was a major problem.  Their fields were fairly flat and the moderately well-drained silt loam soils could not handle the excessive rains. Water pooled, workers could not even walk into the fields without sinking up to their knees in places, and yields and quality of their organic vegetables suffered.
Over the following seasons, they redesigned their farm so this would not happen again.  Ralph has degrees in mechanical engineering and business; Lisa’s degrees are in soil science and civil engineering.  Their first improvements were to make raised beds and do deep subsoiling to improve drainage.  But there was still ponding in some areas.  They had an “aha!” moment when they realized that they could orient their raised beds to funnel excess water off of their beds and fields.  Lisa’s engineering knowledge told her that if the slope of land is less than 2%, soil erosion is minimal.  They thought that if they arranged their beds so that they sloped a little bit, generally 1 to 2%, they could solve their water problem.  This was in conflict with the common notion that tillage (and therefore beds) must be oriented closely to elevation contours. 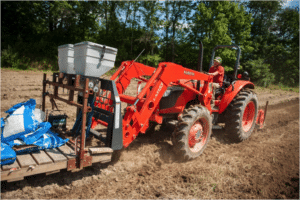 Fertilizing and re-forming beds in one pass. (Turner)

Forming their beds to follow a shallow slope solved their water problem while preserving precious soil.  The excess rainwater flowed slowly down the packed wheel-tracks and off the field.  Over the next few years, they changed the direction of all their beds, re-orienting them to shed water.  This has helped them through heavy rain events every year since.  They made the bed locations permanent, so compaction from tractor wheels would always be limited to pathways and previously compacted ground would not creep into the growing area.  About bed directions, contours, and erosion, Lisa says, “the dust bowl mindset of needing to conserve rainfall does not apply here.”
The raised beds are 5 feet on center and mostly 300 feet long.  The bed tops are 42” wide.  They alternate between two beds of spring-planted crops and two beds of summer-planted crops.  A cover crop of oats and peas (which die over the winter) is planted in early fall on beds that will be spring-planted the following year; rye and vetch are planted, if the season allows, on beds to be planted later the next season.  The permanent bed layout has some extra advantages.  As long as they have not gone to seed, weeds can just be thrown onto a neighboring cover crop bed.  People have more space to work, and it is easier on their backs.  Also, overhead irrigation pipes can be run down the cover crop beds without interfering with the cash crops.  Having numbered permanent beds makes planning and crop rotation easy. 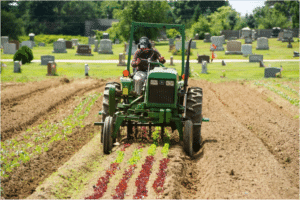 However, having roughly 400 beds means that prepping them takes a lot of time.  Their bed shaper unit took an extra pass and didn’t form the beds properly until several feet into the pass.  Ralph put his expertise to work and modified their rototiller so that it forms beds and tills in one pass.  This also tends to raise the tiller unit, so that the tilling action is shallower.  At this same time, they realized that in order to do a precise job with the beds, they needed to upgrade from their 35 HP 4WD tractor to a 50 HP 4WD.  This allows for better control and driving in very straight lines.  Ralph put a fertilizer spreader unit on the front of the tractor so that in one pass, the beds could be fertilized, re-tilled, and shaped for the season.
In spring, for early crops, a residue of dead oats and peas is on the surface of the beds.  This can be fertilized and prepared in one pass, then planted.  For later-season crops, the rye and hairy vetch cover crop is mowed, then tilled.  After a week or so, the final prep pass is made with fertilizer.  Then these beds are ready to plant.  Fertilizer is applied only to the bed surface.  By doing this rather than broadcasting, they use roughly 30% less fertilizer.  They apply only dry mixes, not compost, because a compost spreader would waste valuable material on the wheel-tracks.  They also use a considerable amount of 66” wide black plastic as mulch on the beds, especially for melons, eggplant, etc.  Last year Ralph put his latest touches on the tiller, and now it can lay plastic as well as fertilize and prep the beds.  A cover crop seeder was added, so they can also till, bed shape, and seed a cover crop in one pass.  They sometimes overlap a 3’ wide strip of woven greenhouse mat over the edges of black plastic, covering the wheel-tracks, to prevent weeds there as well.  Otherwise the wheel-tracks are cultivated.
After harvest, the beds are mowed, tilled, left for a week, and then tilled one more time and planted to cover crops.  Leaving residue for a week and then tilling a second time before seeding seems to improve the cover crop stand.  Subsoiling is done every 2 or 3 years.  By combining many practices, their new system improves soil via shallower rototilling, plus subsoiling and no compaction in the beds.  Rainwater infiltrates well, and excess moves off the fields.  Fields are trafficable 1 or 2 days after a significant rainfall, rather than 4 days with the previous system.  Passes through the fields are minimized.  It all adds up to resilience in the face of more extreme weather events, as well as increasing profitability by greatly decreasing the number of hours spent on the tractor.

Reduced tillage takes many forms. This story is the 3rd in a series featuring organic vegetable growers that have transitioned to reduced tillage systems toward greater farm sustainability. Experienced growers at diverse scales are developing reduced tillage strategies for tackling weeds, managing rotations and cover crops, and incorporating amendments. Look for past and future SFQ issues to learn the practices that are helping these growers build better soils. Contact Ryan Maher of the Cornell Small Farms Program for more information on this project: ryan.maher@cornell.edu.

This system requires more skill to implement than what they did 10 years ago.  Precision is important.  The tractor driver is doing several operations at once.  It is more difficult but faster.  In the path to this approach, Ralph’s equipment designing and fabrication skills cannot be overemphasized.
Developing Lisa and Ralph’s production system took a lot of original thinking and persistence.  Lisa says, “Everything we did was because something failed.”  She adds that a farmer needs to avoid getting stuck in preconceived notions.  “Look at the situation you’re in now and evaluate.”
Her advice to other farmers: “There are a lot of right ways to do things.  In different situations, some are better.  Don’t change everything at once—try a little bit first.  What works for others may not work for you.”
Brian Caldwell and Ryan Maher are Research/Extension Support Specialists with Cornell University inIthaca, NY. They can be reached at bac11@cornell.edu and rmm325@cornell.edu respectively.