Tapping Walnut Trees for a Novel and Delicious Syrup

by Michael Farrell
Most people are familiar with maple syrup production- it is a time honored tradition throughout eastern North America and has seen a resurgence in popularity over the past decade.  Though it is not well known, all species of walnut (Juglans spp.) also produce a sweet sap that can be boiled down into valuable syrup.  There is a well-established resource of black walnut (Juglans nigra) trees throughout eastern North America that could be utilized for syrup production to complement existing sugaring operations.  Tapping walnut trees is a relatively new phenomenon and very little information exists on the optimum tapping time for these species, the expected yields from traditional bucket or more modern vacuum-enhanced tubing systems, and the overall economic outlook for producing walnut syrup. Although the number of tappable black walnuts is significantly less than the number of tappable maples, there are excellent opportunities for sugarmakers to utilize the trees they currently have while also planting these trees for long-term benefits.  They grow extremely fast and are relatively easy to establish in open fields and along watercourses as riparian buffers.  Most people currently plant walnut trees for their timber value and nut production, however syrup production could be one more attribute to add to the list.
Sap flow in walnut trees was first reported in North America in the 19th century as part of a comprehensive study of sap flow in plants. Research on butternut (Juglans cineria) in Michigan in the 1920s showed promising results in comparison with maples. Sap flow in English walnut (Juglans regia) has also been studied in France due to the worldwide importance of nut production in this species. Controlled research in an English walnut orchard and greenhouse demonstrated the capacity of autumn, winter, and spring sap flows through a combination of stem and root pressures.  The researchers never investigated the potential to use this sap as a source of syrup production.   There was limited research on using the sap of black walnut trees for syrup production took place in Kansas nearly a decade ago.  It was meant as a preliminary study and despite the promising results, no follow-up studies were conducted.  Todd Leuty from the Ontario Ministry of Agriculture recently conducted research on tapping Japanese walnuts (Juglans ailantifolia) grafted onto black walnut rootstock in Ontario.  His findings, as well as other practical experience, indicates that the sugar content of walnuts mirrors that of maples, yet the amount of sap flow is significantly less.  Whether the amount of sap produced is so low that it limits the commercial potential of this 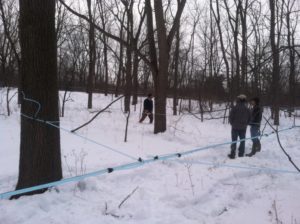 A tubing system installed at a walnut grove in Syracuse. More research is necessary to determine the impact of collecting walnut sap under high-vacuum conditions.  Photo by Michael Farrell.

species is not yet fully known. Furthermore, none of the previous studies were done with high-vacuum tubing and there isn’t yet any reliable data on what one can expect from tapping black walnuts.  Since vacuum tubing can produce 2-3 times the amount of sap as gravity flow in maples, we need to know if there is a way of using vacuum to get more sap flow out of walnuts.
With a grant from the Towards Sustainability Fund at Cornell, we conducted research on black walnut sugaring in 2014. In order to determine potential yields from black walnuts, we collected sap at four sites in New York, Pennsylvania, and Indiana during the winter of 2014.  In New York, we tapped 58 trees using individual bags and 5/16 spouts on Cornell’s campus in Ithaca and 96 trees using vacuum tubing at Lemoyne College in Syracuse.  A sap puller diaphragm vacuum pump was utilized at this site with an average reading at the pump of 18” Hg.  Jacob Noonan served as a research collaborator and tapped 35 trees on buckets with 5/16 spouts in Erie, PA.  Rich Hines also tapped 10 trees with 7/16 spouts and buckets in Indiana.  Whereas most of the trees were tapped in mid-February for all sites, Hines tapped his trees on November 19 to explore the possibility of sap flow in autumn.  At all locations, every time sap was collected (usually every 4-7 days), the total volume and sugar content of the sap was measured and recorded.  At the end of the season, all of the data was analyzed and normalized to equate to oz of syrup produced, following the “Rule of 87.1” commonly used in the maple industry.
The highest yielding site (Erie PA) produced an equivalent of 11 oz of syrup per tap whereas the lowest performer (Syracuse) yielded only 6 oz of syrup per tap. For comparison purposes, maples usually yield between 32 and 64 oz of syrup per tap. In a similar manner to maple sap flow, sap sugar content was very low in the Fall (less than 1%) and much higher in the spring (2-3.5%). The highest reading taken was 6.2% and there were many trees producing sap in the 4-5% sap sugar concentration range.
Although the sap yields observed in this study were extremely low when compared to traditional maple syrup production, it is important to realize that this study only covered one year. As with maple, the differences in yields are likely to be significant between years based on local weather conditions, so it would be premature to make 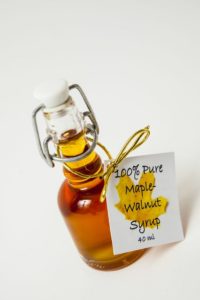 A blend of maple and walnut syrups sold at Cornell’s Uihlein Forest in Lake Placid. At $5 each for a 40 ml bottle, the retail price equates to approximately $500/gallon.  Photo by Nancie Battaglia.

assumptions based on one year of data. 2014 was also very cold throughout March and soils were deeply frozen due to a lack of snow cover, which could explain part of the reduced yields. However, this study suggests that it is unlikely that walnut trees will ever produce similar quantities of sap as maples, even in a good year. Though it was surprising that the vacuum tubing system produced the lowest quantities of sap, this was only a preliminary study without any replicated trials. Thus, future research should explore sap yields under vacuum at additional sites over the course of several years before any conclusions can be made regarding the effect of artificial vacuum on walnut sap flow.
Another aspect of walnut syrup production that requires further attention is the large quantities of pectin found naturally occurring in the sap.  Pectin can make filtering the sap and syrup extremely difficult and time consuming, clogging filters much more rapidly than the sugar sand often found in maple syrup.  There seems to be tremendous variation in the amount of pectin produced between individual trees and sites as well as the time of the year that the sap was collected.  We did some initial experimentation with using pectinase, an enzyme that is designed to break down the pectin. Our initial trials were not extensive enough to come to any conclusions on the efficacy of pectinase, but given the problems associated with filtering and the prevalence of pectinase in so many other food processing industries, this idea deserves further attention. It’s also worth noting that if you want to make walnut jelly instead of syrup, that would be much easier!
As a final note, if you are already producing maple syrup and have walnut trees, I would recommend doing some experimentation on blends of maple and walnut syrup. Maple-walnut is a popular ice cream flavor here in the northeast and most people have heard of it. Of course most maple-walnut varieties use English walnuts and imitation maple flavor, so a maple-walnut syrup made from the saps of these species is nothing like the ice cream flavor. However, because walnut syrup tastes surprising similar to maple syrup (with a bit of a nuttier flavor), blending the two syrups creates a value-added product that can stretch your small amount of walnut syrup further. We’ve done that with most of the walnut syrup we produced at Cornell and customer feedback has been tremendous.
If you are already producing walnut syrup or are considering doing it in the future, we would love to hear from you. Feel free to call Michael Farrell, Director of The Uihlein Forest at Cornell University, at (518) 523 9337 or send a note to mlf36@cornell.edu with any questions or comments.