by Edward DuQuette
Several Utah winters ago, my wife and I received a phone call that two of our dearest friends were involved in car accident. This accident was more than your average fender bender. Chet and Christine Bailey ran off a mountain road in their pick-up truck because of a small patch of ice. Their truck then rolled several times down the mountain before stopping with the help of a tree. The roof of the truck’s cabin collapsed during the roll crushing Chet’s spine. Christine was also hurt but was able to walk away with serious injuries, none life treating. Chet’s prognosis wasn’t as promising. He was probably going to lose most of his motor functions from his neck down, pretty much paralyzed. There was even a question if he would survive. This throat was also crushed, making it hard for him to eat, drink or talk.
This story would probably not have had a happy ending. But you see Chet wouldn’t give up, he has a family to support and a family business to operate. His rehabilitation was no less than a miracle. He totally surprised all his doctors and everybody that knows him. He was determined to walk and be productive again. 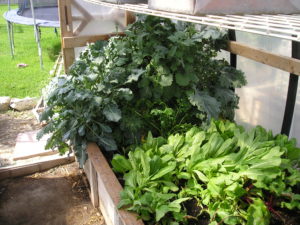 These raised beds are extra tall for ease off operation, thermal mass storage and the heavy grounding to hold the green house down during our high prairie winds.

Finding a Hobby
Chet needed something to keep him busy, not too strenuous or excreting, slightly challenging, and maybe just for an hour or two a day. Maybe stamp collecting, or how about bird watching? Chet made the only logical possible choice for him: farming. You know, something easy to do. I’m saying this with a smile; we know how physically demanding farming is. But this did not stop him; he built all of his micro farm from recycled building materials he collected and organically rich composted soil from the city recycling plant center. His raised beds were built tall because of his problems bending over that he has developed from the accident. The greenhouse, built completely out of recycled plastic pipe and reclaimed wood, supports a 10-month growing season and is only heated in our cold Utah winter nights with only 3-small kerosene lanterns. During the day, inside temperatures reach 100 degrees + in the summer. The green house is built to be very thermal efficient. His 2 extra tall raised beds in the green house also act as thermal mass storage and the counter weight that holds it down when we get occasional 50-70+ mile per hour wind gust. January and February are the only two months of the year he not producing some kind of crops. Each day, he hand waters his plants in the green house and on his micro farm. The small farm is 100% back to basics with only 2-6 hours of therapeutic work needed per day.
A Very Special Design
When Chet told me how he made his Green House with plastic PVC pipe he said it with a laugh. It was plastic pipe he had sitting around this shop. Now we all have seen greenhouses made with white PVC, they are nothing new. But this was something different. The green house was constructed from 6inch diameter black drain pipe cut into quarters. The plastic drain pipe was heat bent and attached to the two very tall and very heavy raised beds. Everything else was constructed from scrap lumber; the plastic covering was purchased from a greenhouse supplier. This is one of the most stable DIY greenhouses I ever seen. Also notice 2 doors for easy access and ventilation. The greenhouse is simple in construction but very efficient in design. 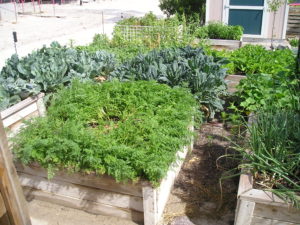 These ground level beds serve as the final growing beds for the green house transplants. Intense gardening technique is use here with obvious success.

What the Future Holds
There are definitely applications for solar and wind to power for his micro farm. Passive solar could heat the greenhouse very nicely. Solar panels could easily power watering pumps, lighting and circulation fan in the green house. Soon if I can convince him I would like to introduce Aquaponics to his farm. The farm is now a perfect model for growth with some limited automation. His farm is definitely designed for self-reliance and model for The True Non Stopping Pioneering Spirit that is the backbone of the American Farm. His farm might be small but his endeavor and his success is certainly large.
Saving for a Rainy Day.
Chet’s farm is constantly growing and expanding, adding fruit trees, grapes, vegetables and more grow beds or some growing buckets. Everything is grown from seed, and Chet and Christine processes their vegetables and fruits by canning, dehydrating and seed saving. There’s no waste: what doesn’t get used by this family, Chet shares with his neighbors and friends. Any remaining waste is fed to chickens and his compost pile, so that everything gets used is some form or another.
Chet said it took about 2-years for his organic soil to kick into high gear with no additives just his own organic mix. Now it produces vegetables with super results. His veggie fresh out of the ground are the best I’ve ever tasted they are “true organic produce.” Chet, Cristine, and family live in Eagle Mountain, Utah. Good friends and good neighbors.
Edward DuQuette teaches several classes on Aquaponics, organic farming, hydroponics, and solar and wind power as off the grid options at 2- Utah Colleges and a Trade School Program. He freelance writes for several publications (his favorite is Cornell SFQ). He has a background in electronics engineering and mechanical design, with military and commercial applications. Ed is semi-retired and lives in Eagle Mountain, Utah. He can be reached at eduquetteut@gmail.com.