by Sam Anderson
If you have raised sheep or goats on pasture for at least a couple of years, or have been to a few sheep or goat workshops, or have read very much at all about pasture-based sheep or goat farming, you probably know a bit about the problem of internal parasites, aka “worms.” You may already know that pasture-borne parasites such as the dreaded Haemonchus contortus, aka “barberpole worm,” co-evolved with sheep and goats, as evidenced by their life cycle: The adult worms reproduce in a sheep or goat’s gut, depositing thousands of eggs onto the pasture in the animal’s feces, where the larvae hatch and migrate a few inches up the blades of grass to wait for another sheep or goat to come along and ingest them, starting the cycle anew. While most animals can shrug off a small infestation of Haemonchus, a large parasite load causes anemia, loss of body condition, and eventually death, especially in young lambs and kids. 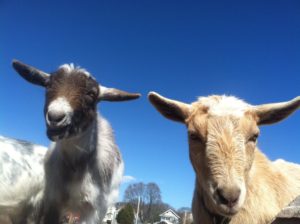 Young kids and lambs are especially susceptible to internal parasites.

While barberpole worm and the other most important pasture-borne parasites can be controlled with chemical dewormers, misuse (e.g. treating too frequently or treating all animals regardless of need) leads to dewormer-resistant parasites. When one type of dewormer loses its effectiveness due to parasite resistance, the farmer can still move on to one of the other types of dewormer—but if this is not done carefully, you can end up with a parasite population resistant to multiple dewormers, until eventually chemical dewormers are simply no longer an option.
This has been a serious problem for years in the southeastern U.S., where shorter winters mean a longer parasite season, but it is an increasingly important issue on northern sheep and goat farms, too. A 2010 study out of Delaware State University examined parasites’ level of resistance to the four types of commercially available dewormers on 33 sheep and goat farms in the mid-Atlantic region, with some pretty eye-opening results:

But my animals haven’t had any worms. What does all of this have to do with me? 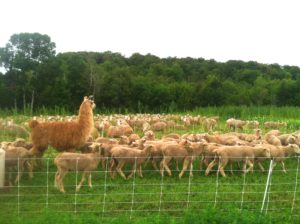 They may look pretty different, but your sheep share parasites with your guard llama (alpacas, too).

If you’ve never had to deal with a worm problem in your own herd, this might all sound a bit overblown. In fact I’ve heard this sentiment quite a bit, especially from those who haven’t been raising sheep or goats for very long, those who only have a few animals, and those whose animals don’t spend much time on pasture. And my response might be: Fair enough. If you have a small enough number of animals and plenty of space for them, or if you mostly raise them in a barn or a dirt lot, worms might never be much of a problem for you. But if you want to raise enough sheep or goats to call it a business, you want to raise them on pasture, and you plan to make the best use of your pasture resources—and especially if you plan to have a spring or summer lambing or kidding—then chances are very good that you’re eventually going to have to deal with a worm problem.
In case that sounds like an overstatement: In a recent survey of 165 sheep and goat farmers from across New England, 72% listed internal parasites as the most costly management issue on their operation. For comparison, mastitis came in second at 6%. And of those who didn’t list internal parasites as their most costly problem, nearly all listed it as their second costliest. 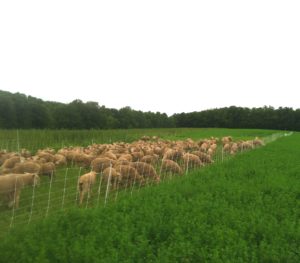 Rotational grazing can be a very important strategy for reducing parasite pressure, so long as fields get plenty of rest or are hayed before being re-grazed.

So how do you explain the farmer who swears she has never had to spend a penny on dewormer in all her years raising goats? It could certainly be thanks to her skilled management, especially if she is actively using integrated pest management (IPM) strategies. But there are some other possibilities too. Maybe she has unwittingly been applying IPM strategies that limit the parasite population, such as well-timed rotational grazing or starting out with animals that carry a strong genetic resistance to internal parasites. If she has loads of pasture and only a handful of goats at any given time, the pastures may have a low enough concentration of parasites that it may never be much of an issue. Or if she has only had her goats for four or five years, the parasite population may have just not built up enough to cause noticeable problems… yet.
Here’s the point: Just because I haven’t noticed internal parasites causing problems in my sheep doesn’t mean I can really say “we don’t have worms.” In fact, even though I haven’t lost any lambs or seen any bottlejaw, internal parasites might already be costing me money. By the time you are losing animals to worms, they have probably been affecting your bottom line more subtly for some time, forcing your lambs to redirect energy from adding body condition toward instead having to fight off a parasite infestation.
What can you do about all of this? You can head off internal parasites by implementing IPM strategies before you have a problem. There are lots of resources (see the sidebar for a few) that can help you understand how to strategically manage your grazing, your flock’s genetics, and your deworming regimen to keep internal parasites under control and deal with dewormer resistance. But first you have to take the matter seriously. Especially considering how quickly dewormers can become ineffective, any sheep or goat farmer who has had to deal with a serious internal parasite problem will tell you the same thing: Prevention is the best medicine.
Sam Anderson is Program Coordinator at New Entry Sustainable Farming Project.