Shiitake Mushrooms Turning a Profit for Forest Farmers in the Northeast

Research Shows Woodland-Cultivated Shiitake Mushrooms to be a Leader in Profitable Agroforestry Crops.

One long held assumption about many agroforestry practices is that while they promote positive land stewardship, the economics just aren’t there. Often farmers only adopt practices if there are financial incentives (NRCS programs, for example) or if the practices peak a side-interest from the more “serious” aspects of the farm. While university research from around the nation has demonstrated that agroforestry makes sense for the environment, adoption lags because it has not fully shown that there is also money to be made.

The lack of positive economics of different agroforestry systems is not due to the fact that these systems are inherently unprofitable, but rather due to the fact that the necessary research and development by researchers, extension educators, and farmers for many crops just hasn’t been done. There are also cultural and social factors, as agroforestry inherently implies “stacked” systems where multiple crops, the timing of management, and other factors force farmers to look at their landscape in a different way.

Yet, this perspective is in fact the virtue of agroforestry – that complex farm ecologies based in tree crops can better support healthy farms. And while all agroforestry crops may not be ready for “prime time” in the global food system, we are seeing the beginnings of enterprises and systems that are proving to pay the bills. One of these, at the forefront, is woodland-cultivated mushrooms, most notably shiitake (Lentinula edodes).

Research based at Cornell University in partnership with University of Vermont, Chatham University, county cooperative extension agents, and farmers has led to a significant increase in demand and interest for forest mushrooms over the last five years. This effort was boosted by almost a decade of research by recently retired Cornell professor Dr. Ken Mudge on the specifics of shiitake and lions mane production including species selection, harvesting protocols, and management logistics that have greatly improved understanding of cultivation. 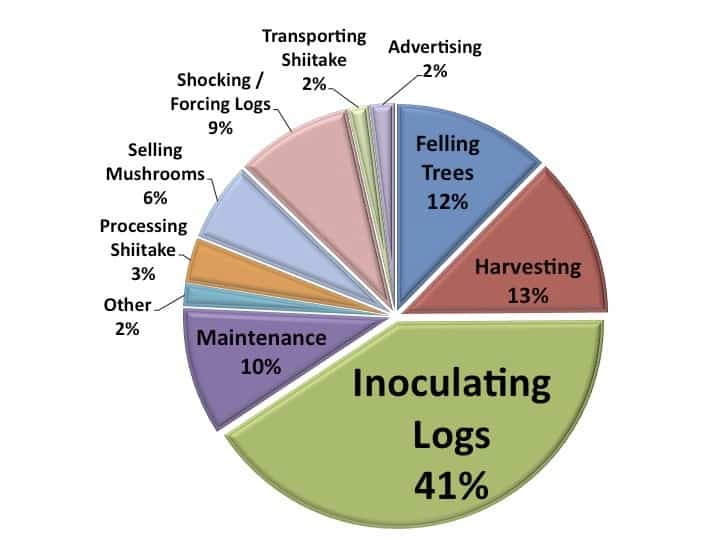 This base research fed into a three-year SARE sponsored project Cultivation of shiitake mushrooms as an agroforestry crop for New England where over 250 farmers were educated in the basics of cultivation and forest management. 55 completed a 5-year enterprise plan for a shiitake operation, and of these 27 were selected to inoculate 100 logs and keep data records on time, expenses, and sales of product. 15 farmers actually followed through on log inoculation and provided complete datasets. Of these, 10 of the 15 reported net profit after expenses.

One aspect of the study focused on the breakdown of labor (Figure 1.1), where it is notable that 53% of labor was spent felling trees for inoculating bolts, 32% for maintenance tasks and harvesting, and 15% for marketing and distribution related work.

This snapshot provides some good characteristics for shiitake cultivation; much of the labor is accomplished in the colder months of the year as forest management is least cumbersome in winter months and inoculation can happen at any time after harvesting, though there is some evidence that the sooner, the better. This means that farmers can put the bulk of the work into the enterprise in a time of year where other farm activities are at a minimum. A well-designed laying yard means that maintenance and harvesting tasks can be efficient and equate to a morning chore rather than eating up precious parcels of time during the growing season.

All told, growers spend just over 1 hour per bolt throughout the entire process, a useful measure to think of when deciding on a scale of operation. Also notable is that much of this time is an upfront “investment,” as felling trees and inoculation take the majority of time. This process occurs only once in the lifetime of a log, and a good log can continue to fruit for 4 or more seasons. 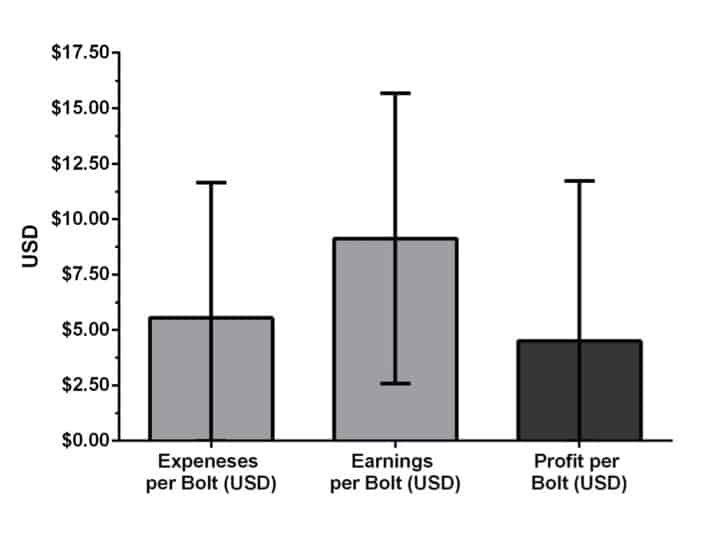 Another dataset summarizes expenses and earnings, which were quite variable. The average cost per bolt was around $4.74, although approximately half of participant’s expenses went toward “durable goods,” equipment and supplies that are often a one-time purchase. This means that after some initial investment, the cost per log could go down as much as 50%. One element that skewed the data, for instance, was that 22% of costs were for tree cutting equipment (chainsaws, safety gear, etc) which may be something a farmer already has or may not be necessary if logs are purchased from an outside source. Actual supplies essential to inoculation, harvesting, and sales are around 75%, or less of the total above.

Equally important is data where log-grown mushrooms are sold successfully, and for how much. Whereas conventional, indoor grown shiitake sells for $4 – 8, log-grown shiitake has commanded a much higher price, ranging from $10 – $16 per pound.

Most mushrooms (46%) were sold to restaurants, followed by direct sales (19%), farmers markets (15%), groceries (15%), and other (5%). Most growers report that in their local markets the demand far exceeds the supply, indicating ample room to expand operations as well as support additional growers.

The bottom line of the economic analysis is that farmers can make income from shiitake cultivation. Of the 15 participants who submitted full datasets, 10 made a profit in just the second year of production. The profits ranged from $1.39 – $11.88 per log, depending on the expenditures the farmer chose to take (Figure 1.2). This means an average profit of $5/log per season, or $15 – $20 per log over its productive lifespan. Along with this data, extension specialists crafted some sample budgets for a small operation where 100 logs are inoculated each year, until a total of 500 logs is reached. As shown in Figures 1.3 and 1.4, one could expect to produce a profit in year two, and over $4,000 in profit in year five. Total profit over the five years is estimated to be around $9,000. 500 logs is considered a small operation; most commercial growers manage between 1,000 and 3,000 logs.

It’s important to note that while we were able to establish some trends in the economics, there is high variability in the choices farmers make, how efficient they are with their time, and other constrains of location and farm particulars. Those interested in commercial shiitake cultivation should keep records on income and expenses and track their own progress in relation to the above data. 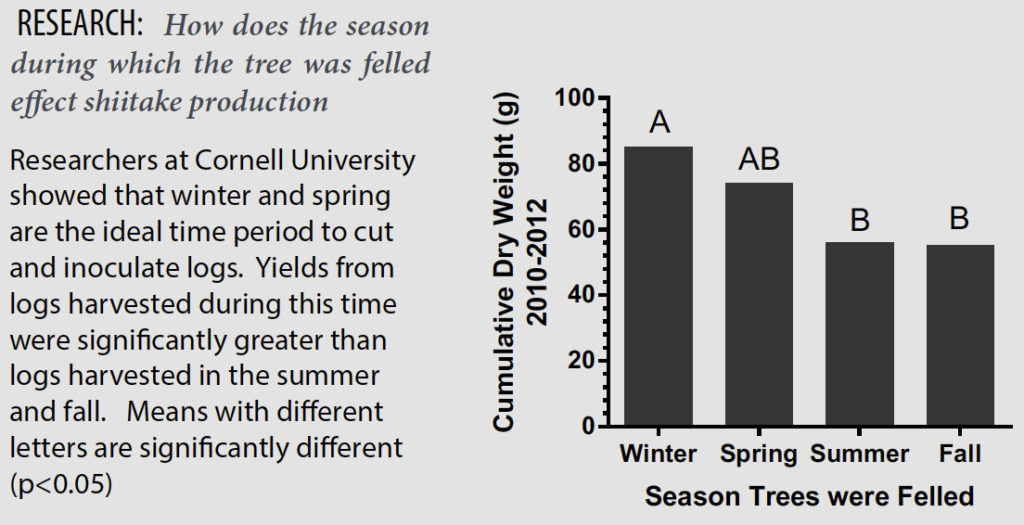 In addition to the above economic factors, there are several management factors that affect timing, forest ecology, and choices each farmer must make. Some of these variables include:

Date on which a living tree was felled (cut down) to produce bolts for inoculation. In an experiment at the Arnot Forest, we cut and inoculated red oak and American beech trees at 3 month intervals for a year. Winter and spring-harvested logs performed similarly (in terms of mushroom yield) and substantially better than trees cut in fall or summer, both of which performed about the same (Figure 1.5).

Date of inoculation. Our research from the SARE project indicates that bolts inoculated earlier in April produce more mushrooms versus those done later in spring. There is also a significant relationship for production between the number of days elapsed between felling and inoculation. In summary, the earlier the log is inoculated after felling, the better.

Tree species has always been considered an important factor when producing shiitake mushrooms as a forest crop. Conventional wisdom has it that oaks are best, other hardwoods like hop hornbeam (Ostrya virginiana), musclewood (Carpinus betulafolia), sugar maple, and American beech are acceptable, and red maple is a less acceptable substrate for growing shiitake mushrooms. These are recommendations based on input from many growers and our own research, but it is important to realize that they are not absolutes (Table 1.6).

The performance of one tree species will depend on the shade and other aspects of the laying yard’s microclimate, as well as the time of year, so that the preferred tree species for one grower is not necessarily the same for another grower. Even though the generalized table shows oak and sugar maple in the top tier and iron wood in the next lower tier, our results from one experiment at Cornell’s Arnot Forest showed that iron wood performed significantly better than oak, sugar maple, and hop horn bean.

That does not mean that the table is wrong; just that actual performance of any tree species is influence by other factors that the grower may have little or no control over. So, it is important that any new grower should not depend on any one tree species, but rather, try several until it is clear which is best for your site.

A number of “unintended consequences” emerged from our work over the last eight years. In addition to an emerging grower network (see sidebar), our biggest discovery was the positive link between mushroom cultivation and forest health. Obviously there is value in forest preservation, which provides optimal shading conditions for the fruiting mushrooms, but beyond that a larger link between forest thinning and stand improvement emerged.

Often woodlot owners are incentivized to cut trees by the economics; whether it be timber harvesting, firewood for sale or personal use, or use rights like a hunting lease. For small diameter stands (4 – 10” trees), the main product is firewood, which has limited use and value—at 6” diameter, roughly 20 trees make a cord of wood, which equates to $10 – $15 of revenue generated per tree (whether selling it or for personal use). If the same tree is harvested for shiitake mushrooms, one might yield 5 – 10 three-foot logs per tree. Mushroom cultivation could yield $25 – $50 per stem; a much improved margin if one is willing to put in the time and work over several years. In reality, timber stand improvement thinnings can yield both mushroom logs and firewood, which means that both efficiency and productivity are maximized.

There are further implications to forest ecology, as harvesting mushroom logs can focus on thinning some of the species that will support the long term, positive ecology of the woods. One example is thinning beech trees for mushroom logs, which are often in decline from beech bark disease, and further aren’t considered a high value timber species. Instead of seeing beech resprout as a “weedy” problem, farmers could manage young shoots or thin older, diseased trees for mushroom logs, finding value where previously there was none. The bottom line is that farmers should work on a stand management plan, thinning for forest health, with the byproduct of that thinning being mushroom logs and other products.

Steve Gabriel is agroforestry extension specialist for the Cornell Small Farms Program, and in addition runs a farm with his wife in Mecklenburg, NY, where they grow and sell mushrooms, duck eggs, lamb, and more. He can be reached at sfg53@cornell.edu.