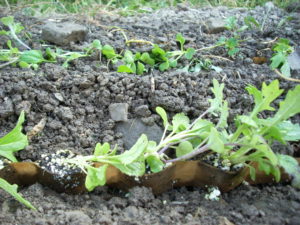 Poorly planted greens that did not “seat” well into the soi

The spring of 2011 was extremely wet in New York State. Local farmers shared stories of being delayed by five weeks in getting out to prepare the soil for planting. A sense of desperation filled the air- don’t try to keep farmer’s from their fields when the normally appointed time for planting arrives! The first plantings of many of our early spring crops such as beets, spinach or lettuce got skipped because of the constant rain. As we start to realize the effects of climate change, extreme weather patterns like this are anticipated to become more common. As the rain was falling and falling, we were busily seeding crops into trays in the greenhouse and wishing that we could be planting our early crops in there, as well. General knowledge says that it is not cost effective to fill many trays with those crops and then spend hours transplanting them. If a simple cost effective way could be found to do it, there would be many benefits to starting traditionally direct seeded crops in pots and then planting them out as small plants, rather than as seeds.
Having seen videos of this cool tool called the Japanese paperpot transplanter that puts plants in the ground jaw droppingly fast, we wondered if a tool like that could have saved spring 2011 for us. We wrote a SARE farmer grant to study if the paper pot transplanter (lets call it the PPT, for brevity’s sake) could be a profitable way to transplant traditionally direct seeded crops while also mitigating the risks of wet weather that makes working the soil impossible. We anticipated that there also could be a reduction in labor and cultivation associated with these crops as the transplanted seedlings will have a head start on the weeds. As an added bonus, the PPT is used standing up, so wear and tear could be reduced on the transplanter’s body.

Muddy Fingers Farm is a two-person small-scale vegetable farm. The farmers are Liz Martin and Matthew Glenn. We raise over 100 different varieties of vegetables on our 3 acre farm. We focus on fertility by creating a healthy soil ecosystem through crop rotation, cover cropping, the use of compost, and a reduced tillage system that uses permanent growing beds and permanent sod paths between them. While we are not certified organic, we do not use any herbicides. On the rare occasion when we have needed to use a pesticide, we only use products approved for use by certified organic growers. All of this helps us to grow healthy, vibrant crops. Produce is marketed through an 80 member Community Supported Agriculture (CSA) program, three weekly farmers’ markets and sales to fine local restaurants. 2014 will be our twelth season growing vegetables. We are glad that our small farm provides full time employment for both of us.
Our farm is well suited to doing research on the profitability of different cropping methods because we have spent the last four seasons tracking the relative profitability of our forty-some crops. We have developed an efficient system for recording labor and harvest data for separate crops and analyzing that data when we have time in the fall and winter. (Our record keeping system was covered in an article in Growing for Market in February 2011.)

How did the study work? 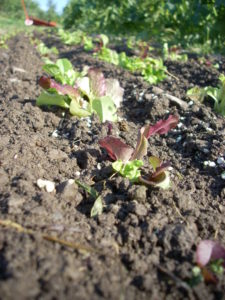 Our farm is small and land-limited, so we carefully consider which crops will return us a certain minimum amount per bed of growing space ($400 per 100 foot bed) while also balancing a diverse crop base to satisfy our CSA members. In our studies of crop profitability, we have noticed a trend that crops that are direct-seeded tend to take more labor to keep them weed free than transplanted crops, and thus direct-seeded crops on average have been less profitable for us than crops that we transplant. (Because of this, we try to transplant as many crops as possible and we hoped the PPT would allow us to expand our transplantable crop list.) We regularly direct seed 12 crops on our farm: beets, carrots, cilantro, radishes, turnips, lettuce mix, parsnips, arugula, spicy greens mix, spinach, rutabagas, and beans. We transplant head lettuce, but we thought it would be a candidate for use with the paper pot transplanter. The paper pots come in linked chains at 2, 4, or 6 inch spacing which makes them suited only for fairly closely spaced crops. Head lettuce is normally transplanted at one foot spacing, but for the study we used the PPT 6 inch spacing. Our plan was to harvest every other one as small heads.
For ease of record-keeping, we chose 5 crops that were representative of the types of direct-seeded crops based on the spacing and harvest patterns. They were: beets, spinach, lettuce heads, lettuce mix, and beans. Because the majority of farms are not already transplanting beets, spinach and other greens using the PPT for them is actually creating more work- the PPT must give some big advantages to earn its keep.
One flaw in our study is that we did not study the profitability of onions, scallions or leeks with the PPT. These are the vegetables most commonly associated with the PPT as people are already transplanting them at a close spacing, so the PPT could reduce transplanting labor on these. We have found that we are not good at tractor cultivation on our farm, and therefore use a lot of mulch (hay, weed mat, and biodegradible). In trying to avoid growing on bare soil, we found a method of growing alliums- transplanted into weed mat, that gets reused- that has worked very well for us. Hand weeding is needed once or twice just in the holes around the onions. Since we are very happy with this method, we did not include any alliums as study crops.
We chose not to do any tap rooted crops such as parsnips, carrots and daikon radishes which have been reported to be unsaleable as they have too many forked roots as a result of being started in the small paper pots. Cilantro was also not chosen, as it resents being transplanted, and so is not a good candidate.
We did three planting times for each crop that we studied. With the exception of head lettuce which we already transplant, for each planting we compared the direct seeded bed to PPT bed. We recorded how much we earned and how much time spent on producing each crop. In the first planting of the year, we also compared earliness – would the PPT allow for earlier harvest?

How did the PPT do at giving earlier spring harvests?

By transplanting 2-3 week old plants as soon as the ground can be worked could we harvest earlier in the spring?
The only problem with this is that we are still guessing when it is 2-3 weeks before the ground can be worked! This seems like it would be the biggest help in a late, wet spring, because it would allow seeds to be started even while the ground is wet. Then 2-3 week old plants will be ready to be transplanted when the soil dries. 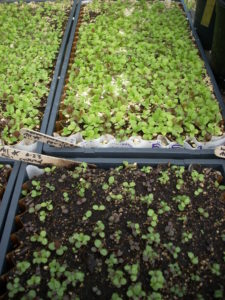 Neither 2012 or 2013 was a wet spring. In fact 2012 was an extremely early, dry spring, with plants going in the ground 5 weeks earlier than we might have expected! It was hard to realize that we needed to start our earliest plants, because it is not a time we nomally would be getting ready for field work!
The results from these two springs showed beans were one week earlier, but due to the plants lacking vigor, we did get less yield overall. (We have had excellent success transplanting our first beans from 50s.)
Spinach was also earlier – 1 week earlier the first year and 12 days earlier the second year. Beets were not earlier in these two trial years, though in 2012, due to not being soothsayers, we did not start plants early enough to beat the outside planting window which was exremely early! And in 2013 the earliest planting failed to germinate well and was unusable. We believe earlier harvests should be attainable with the PPT, especially in a wet spring.
Lettuce heads were not earlier, as both were transplanted. Lettuce mix was not earlier, but we strongly suspect it could be! The earliest plantings both years failed, showing how dicey it can be to get early plantings just right! One year the trays didn’t germinate; one year the direct seeded comparison bed was lost to weeds, but looked like it would have been ready several days later.
On the side, we tried several other crops with the PPT. While records were not kept for the trial for these crops, we had good success with the following: Parsley, Spicy Greens mix, Arugula, Chard (harvested for baby leaves), Rutabagas, and Mustard Greens.
This study showed that despite the initial cost of the PPT and the on going cost of buying paper pots each year, it is possible that on certain small farms the PPT would be a worthwhile tool. Farms that could exploit the PPT best are businesses that grow lots of cut and come again greens, have finely textured, non-rocky soil, grow greens in hoophouses, and/or already transplant beets, spinach, lettuce mix or other greens.

So what did we learn?

Drawbacks to the PPT
Consider carefully before deciding to buy one. Here are some things that we found problematic.

Benefits to the PPT
The ability to get a head start on weeds by cultivating just prior to planting the small plants, not having to stoop or bend to transplant, and ability to closely schedule plantings.

Here are the questions we wanted to have answered:
Does the tool pay for itself? It depends on the crops that it is used for, on the growing conditions, and the soil type and cleanliness. In our study, we found its most likely to pay for itself in growing cut and come again greens.
Does it save cultivating/weeding time and labor? If bed is empty for several weeks before planting, it provides more time for stale seed-bedding.It is easier to hoe or tractor cultivate an empty bed than to work around small plants.
Does the PPT increase earliness? Timing is tricky. It can provide earlier harvests, but there is a guessing element to when the earliest planting date will be for the year.
Did it allow us to grow more in the same space? This can also be tricky to accomplish. Beds must be very tightly managed. Farms that already do this well should find that the PPT helps do it better.
Does it reduce labor for transplanting? Well, not really. It takes time (not a lot, but some) to fill the trays, then seed them with the greens and beets. Then it takes time to transplant the trays. If the same crop was just direct seeded, it would take less time to put the seed in the ground. That said, the tool does seem like it could pay for itself on the following types of small-scale vegetable farms:

Even after two seasons of using the system, it still feels like there is lots of tweaking that could be done to make it an even more useful tool on our small vegetable farm. Farms who choose to try this tool should be prepared to experiment with different spacing, seed sizes, and planting timeframes before they feel that the PPT has been mastered.
Here are a few tips and techniques we picked up in using the system.

Funding for this project was provided by NE SARE. A full write up of the report is at the website. www.sare.org project number is FNE12-758
Liz Martin and her husband Matthew Glenn own and operate Muddy Fingers Farm, a two person vegetable farm in Hector NY. They can be reached at 607-546-4535 or martin25@juno.com.