Plotting an Oink between the Chicken Coop and the Hoop House

When does it make sense to incorporate pig farming into small scale farm diversification?

By Rachel Carter
Meat is hot in Vermont and pig farming is one of the most popular options to diversify small scale farm operations. A component of Vermont’s Farm to Plate Initiative (statewide plan to double local food production and consumption by 2020) has been focused on accelerating improvements in the meat value chain and alleviating bottlenecks producers face in getting meat to market. Last April, Black River Meats (a division of Black River Produce) opened a new, state-of-the-art meat processing facility in the former Ben & Jerry’s peace pop plant in North Springfield, Vermont. In the upcoming year, Black River Meats will be expanding their operation to include slaughter and value-added meat processing for smoked and cooked meats.

What is Vermont Farm to Plate?

Vermont Farm to Plate is the statewide initiative legislatively directed to increase economic development and jobs in Vermont’s food and farm sector and improve access to healthy local food for all Vermonters. Click to learn more about Vermont Food Atlas and The Vermont Agency of Agriculture, Food and Markets.

As the number of larger producers transition to work with Black River Meats, more space is created for smaller producers to get more skin in the game…
John Cleary of Cleary Family Farm in Plainfield, Vermont typically raises about six pigs purchased in the fall for spring slaughter—he finds fall piglets are usually cheaper than in spring due to decreased demand. Originally a retail and direct market organic egg producer with a vegetable operation, John added pigs to the mix as a way to offer organic pork products to existing customers. 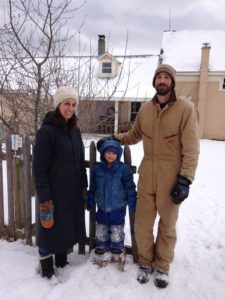 “Pigs are a great option for veggie, egg, and cheese/dairy farmers because they eat so much waste. In thinking about the farm eco-system, they clean up the extra waste from everything else,” says John. “Pigs have a short reproduction cycle and can turnover in six to eight months. A newer farmer can buy piglets and produce meat in a relatively short time without a big commitment.”
Bob and Lee Light have anywhere between 15 to 20 pigs (and one boar) at any given time at Hollister Hill Farm, a direct market farm in Marshfield, Vermont. They also make maple syrup and raise beefalo, chickens, and Jersey cows while operating a farm stay bed and breakfast.
Bob encourages farmers considering pig farming to start out with three to four pigs to meet their own consumption needs—selling one to cover the costs. “Get at least two because they need to compete for food and are very social—they get lonely by themselves,” Bob advises. “They are also great with other animals—just don’t feed them meat scraps or they’ll get the taste for it,” he warns. 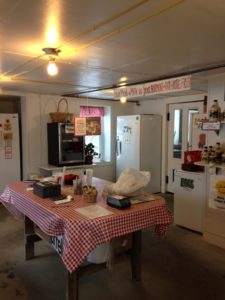 Lila Bennett of Tangletown Farm in West Glover, Vermont raises approximately 50 pigs a year for sale at the Montpelier Farmers’ Market, local coops, and in their meat CSA available through Pete’s Greens. In addition to their pasture-raised pork, Tangletown Farm raises free-range chickens, ducks, Guinea hens and turkeys, and grass-fed beef, lamb and rabbit.
Lila started out with four pigs seven years ago and split the cost with a neighbor. “Pigs are enticing, funny, and smart—it sounded easy and was easy to get into,” Lila recollects. Soon after starting out, Lila and her family learned pigs are destructive and expensive. “They need a place to get wet, because they don’t sweat, but if it rains a lot, they need to be moved often which causes soil erosion.”
“Pigs don’t have sweat glands which is why they have the tendency to lay in the mud,” shares Bob. “They are clean animals if given the opportunity so it’s good to give them a dry place to lay as well as a place out of the sun.”
Whether living on pasture or in a pen, John, Bob, and Lila all unquestionably agree—pigs are masterful escape artists and can be destructive—they need a strong fencing structure! Either a woven wire underground fence or electric fence are necessary. “Once feral, they will breed in the wild which is no good,” adds Bob.
John finds pigs can be easily contained with electric fences, however, they need to be trained as piglets to the electric fence in a secure area so they can’t escape during early encounters.
While securing fencing is an upfront cost, the greatest challenge with raising pigs is the cost of feed. 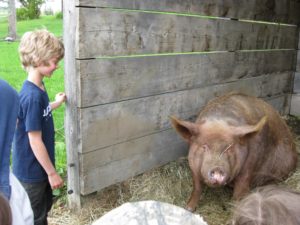 “They eat a lot! When we started out, we thought it would be cheaper to raise our own and that local meat was overpriced. Then we started to have pigs and saw how expensive it really is,” explains Lila. “People think pigs can just eat scraps, but they don’t grow well economically unless fed some sort of steady diet. If you are going to make a profit, you need large pigs and you can’t make a profit if you are feeding longer than six months. There is definitely a science to raising pigs and being profitable and it’s all in the details. We focus on how to grow the best pigs within six months.”
John feels that small farmers bear a responsibility to keep costs down and be efficient. “I don’t want to have to charge too much for my product just because I am so small,” he says. Many farmers use conventional grain to feed their pigs because the cost of organic feed is so high. As an organic farmer, John finds creative ways to keep feed costs down.
Food and garden scraps certainly help, but grain is necessary. John recently built a homemade grain bin that can hold six tons of grain in two compartments. “I must be able to buy organic grain in bulk—I can’t buy 50 pound bags and expect to cover those costs.”
Goat milk whey from nearby dairy farms and artisan cheese makers is one of John’s favorite ways to cut feed costs. In addition, “pigs grow really well on dairy.”
Matching artisan cheese producers with pig farmers is becoming more popular in Vermont. The Vermont Food Atlas—Farm to Plate’s searchable mapping clearinghouse website of all farm and food sector resources—is helping farmers make more direct links to find creative solutions to meet their needs.
Bob stresses the importance of a good steady supply of water in addition to being well fed, “at least twice a day.” He suggests a pressurized water system like the water nipple system he uses in his barn and urges farmers not to use standing tub water.

Costs can also come down if producing (or income raised if selling) piglets, rather than purchasing them. However, Bob calculates that six or seven sows are necessary to cover the cost of a boar.
Finally there is the cost of slaughter which actually should be considered first—before purchasing any piglets. John firmly states, “call and get the slaughter appointment before buying the piglets!”
While the collective work of Vermont Farm to Plate, the Vermont Agency of Agriculture, Food & Markets, Black River Produce, and others is starting to alleviate slaughter and processing bottlenecks, the meat supply and demand chain is on the rise, so plan ahead!
If farmers are planning to sell packaged pork, then they are required to schedule slaughter with a USDA approved facility. Both the Vermont Agency of Agriculture and the VT Food Atlas list USDA approved slaughterhouses in Vermont. Farmers in other states should check with their Agency of Agriculture for approved facilities. Rules vary with on-farm slaughter for personal use, so it is always best to check with the state’s Agency of Agriculture.
Rachel Carter is the communications director at the Vermont Sustainable Jobs Fund, a non-profit organization created by the State of Vermont to help develop Vermont’s sustainable agriculture, renewable energy, and forest product businesses. She can be reached at 802-318-5527 or rachel@vsjf.org.
Connect with the farms featured in this story:
Cleary Family Farm, Plainfield, VT: www.ClearyFamilyFarm.com
Hollister Hill Farm, Marshfield, VT: www.HollisterHillFarm.com
Tangletown Farm, West Glover, VT: www.TangletownFarm.com