By Rachel Whiteheart
Fay Benson’s Facebook page “Girls of Summer” isn’t what the innocent web surfer might think.  Instead of featuring topless women, as the evocative name suggests, Benson’s page promotes another type of unclothed female: the dairy heifer.

Welcome to the Northeast SARE Spotlight!

SARE (Sustainable Agriculture Research and Education) offers grants to farmers, educators, universities and communities that are working to make agriculture more sustainable – economically, environmentally, and socially. Learn about whether a SARE grant would be a good fit for you: www.sare.org

In 2011, Benson received a SARE ‘On Farm Research/Partnership’ Grant to thoroughly examine the effects of confinement vs. grazing on the health and productivity of dairy heifers.  Benson noticed that some larger dairy farmers are reluctant to graze because they believe that grazing is “backwards,” inconvenient, and overly time-consuming; in an attempt to change these farmers’ perspectives, he decided to come up with some cold hard facts as to the benefits of grazing.  And when searching for cold hard facts, what better place to start looking than a heifer’s leg.
Benson conducted two simultaneous experiments under this SARE grant to determine both movement differences and health differences that arose between heifers raised in confinement and heifers raised on pasture. Prior to this point, no experiments had been conducted to quantify physical activity differences between heifers that are kept in confinement and those that are grazed.  Seeing an opportunity for exploration, Benson decided to develop this area as one of his two projects.   His search for the best way to quantify movement differences led him to an almost comically simple solution: pedometers, small devices typically used by people to track the number of steps they take. 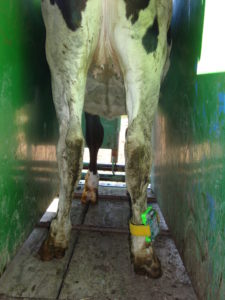 One of Benson’s heifers sports a pedometer that will catalog her movements over the course of a 2 month period. All photos by Fay Benson.

Benson decided that the era of humans monopolizing this technology was over and set to work attaching pedometers to the legs of 10 heifers during their last month out in the grazing pasture before they relocated to a confinement dairy for the late fall and winter. The pedometers recorded every movement that heifers made over the 2 month period (first month on pasture; second month confined).
The pedometers revealed that the grazing heifers experienced a 60% drop in the number of steps taken when the animals transitioned from pasture into confinement.
For Benson’s second project, he examined the health differences that arose between heifers raised in confinement and heifers raised on pasture.  Both Benson and Hardie Farm (the dairy for which he raises heifers) use a computer program called DairyCOMP to chronicle the full health history of each heifer that passes through their farms. DairyCOMP keeps track of specific health markers including milk production levels, times bred, age at first calving, calving ease, and post-freshening health problems.

Professional Development Preproposals – Due July 29th
The Professional Development program funds outcome-based projects that train Cooperative Extension educators and other agricultural service providers in sustainable techniques and concepts. Projects must be directed toward increasing the skill and understanding of these service providers and consistent with SARE’s larger goal of broad farmer adoption of sustainable practices. Awards range from $60,000 to $200,000.
Research and Education Preproposals – Due July 29th
Northeast SARE seeks proposals for research, education and on-farm demonstration projects, and the emphasis is on projects that lead directly to improved farming practices and an enhanced quality of life for farmers and rural communities. Projects must involve farmers and other stakeholders in planning, implementing, and evaluating a potential project; we also fund projects where research, Cooperative Extension, and education are closely linked.
Learn more at www.nesare.org/Grants/Get-a-Grant

Benson doesn’t have enough land or time to allow all of the heifers that are raised on his farm to graze; each year some heifers are held in a confinement barn on his land and some are grazed, a fact that was key in the development of this experiment.  He utilized past DairyCOMP health data for heifers that had grazed on his farm for a period of 5 months in 2009, 2010, and 2011 (he sampled 60 from each year).  He then found past data for a “herd-mate” (a heifer of similar age and stature) that had been raised during each of those years in confinement on his farm. Hardie Farm, which housed each of the test heifers after their stay on Benson’s farm, provided Benson with their past and current DairyCOMP data following the health of each of the sampled heifers.  This set of comprehensive health data for each of the sampled heifers allowed Benson to examine the full health histories of the grazed and confinement heifers during, and after, their stay on his farm.   Benson then used health markers found in DairyCOMP to determine whether any significant health differences arose due to the environment in which the heifers were raised.

Benson found no noticeable health differences across any major health markers between the dairy heifers that he had raised in confinement and those that had been grazed.  He attributes this result to the fact that both the grazed heifers raised on his farm and those heifers raised in confinement on Benson’s farm spent “9 months [after leaving Benson’s farm] in confinement on the Hardie farm, which homogenized the health differences between them.”  Nevertheless, Benson says that the feed costs savings he retains through grazing heifers are reason enough for him to continue (he saved around $650 over the course of a 150 day grazing period).  Benson believes that many other farmers in the near future will be drawn towards grazing for the same reason since“the cost of grazing hasn’t changed but the cost of feed has.”  However, Benson plans to continue his research of the potential health benefits of grazing to give dairies more reasons, besides just economic incentives, to choose grazing. 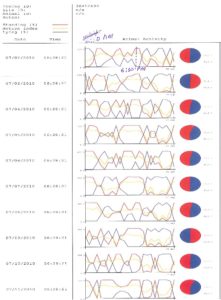 The pedometers attached to the leg of each heifer record the heifers’ movements, including the time they spend lying down, standing, and walking.

This grant was the most recent grant in a series of three that Fay has been involved with, all relating to dairy cows (he jokes that his grants are his very own Lord of the Rings trilogy, but dairy cow-style). His first grant examined health differences between grazed and confined dairy heifers during their freshening period (the period right after a heifer gives birth).  This project determined that grazed heifers had both improved calving ease and a need for fewer antibiotic treatments than heifers raised in confinement.  The second project focused on the use of whole farm analysis for New York small dairy farms to improve nutrient cycling, carbon status and energy use, among other things.  Benson keeps returning to SARE as a source of funding because he believes that “a lot of information that farmers want to know is about applications, which purely scientific research doesn’t always pursue, [but SARE does].”
Benson has already begun to see the impact that his research has had on the practices of Northeast dairies.  Hardie Farm, the dairy farm that houses Benson’s heifers after their stint with grazing, had not previously grazed heifers; now they send their cows to custom graze at Benson’s home farm every summer.  Benson hopes that, with data he collects from future research, he can continue convincing farms of all sizes that grazing is the way to go.
This article discusses SARE Project Number ONE10-113.  Download the full final report at http://mysare.sare.org/mySARE/ProjectReport.aspx?do=viewProj&pn=ONE10-113.
Rachel Whiteheart was a summer intern at the Cornell Small Farms Program during Summer 2012 and is now a junior Environmental Engineering major at Cornell University.  She may be reached at rmw95@cornell.edu.