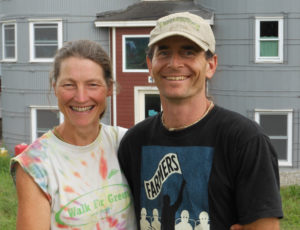 Full Moon Farm is a NOFA-Certified Organic farm run by husband and wife, David Zuckerman and Rachel Nevitt.  The farm started in 1999 at the Intervale Center in Burlington, Vermont.  The two purchased their 155-acre piece of land located in Hinesburg, Vermont in 2008 and began farming there in 2009.  Currently Rachel and David grow 20 acres of diversified vegetables and raise pigs and poultry. They market most of their produce through a CSA and have summer and winter shares.
Both Rachel and David have been standouts in their communities when it comes to conservation, stewardship, and politics.  This year David was elected to the Vermont Legislature as Senator representing Chittenden County.  He has worked on farms for most of his adult life in South Hero, Fairfax, Shoreham, and Burlington, Vermont.  Rachel has been active in both environmental and cultural education and in gardening and farming since graduating from college.
Since their start four years ago, Rachel and David have worked closely with Danny Peet, Soil Conservationist with the Natural Resources Conservation Service (NRCS) to help transition their new land from conventionally farmed corn to a successful organic farm.  When asked why the couple contacted the NRCS, Rachel replied, “As organic farmers, we care very much about conservation and I think we show that in the way that we farm, but our primary reason for contacting the NRCS was to lessen the financial burden of installing irrigation and other necessities on an organic farm.”  Through a series of Agricultural Management Assistance (AMA) and Environmental Quality Incentives Program (EQIP) contracts, Rachel and David have made many environmental improvements including using shrubs for erosion control, cover-cropping and mulching, and installing a seasonal high tunnel and irrigation pond and pipe.
In the opinions of David and Rachel, the most significant change on the farm was with irrigation.  Without reliable irrigation for crops, it’s a gamble to begin planting for the fear of losing significant yield due to drought.  With the irrigation pond and pipe, water is now stored for distribution to nearby fields. When asked about the installation of the irrigation system, David Zuckerman stated, “Without the NRCS funding, we simply couldn’t have afforded it.” 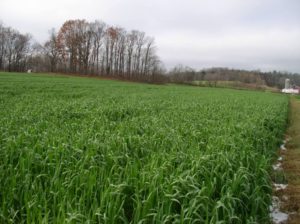 Aside from irrigation, a number of other practices were applied to the farm.  Cover crops and mulch were utilized to help manage soil health and fertility, reduce soil erosion, conserve water, reduce pests and foster greater biodiversity and wildlife – all of which are of utmost importance on an organic farm.  Additionally, shrubs were planted to mitigate erosion at sites where head cutting had occurred due to practices used on the farm when it was mainly corn fields (head cutting is a geomorphic phenomenon where water falls vertically – like a waterfall – and carries sediment with it, thus causing erosion).
A seasonal high tunnel was added to the farm with the intent of extending the growing season.  Dave and Rachael are still learning how to best utilize the system.  One tactic they have used is extending the fall growing season for tomatoes and winter greens.  The winter greens consist of lettuce and mesclun and are harvested into December, and with some being harvested in March as a braising mix.
Full Moon farm would like to provide a continuous supply of greens to their CSA customers throughout the “non-growing” season.  To this end they are planning to raise heartier greens, such as kale and collards, outside into the late fall.  In their high tunnels, they would raise lettuce, mesclun, and spinach under row covers.  They could harvest the greens into January and would be able to start harvesting spinach in mid-February.  While the first harvest of spinach would be from the full growth in the fall before it goes dormant, the second harvest in March would be due to the crop coming out of dormancy.
Rachel and David speak very highly of the mission and purpose of the NRCS in that it makes it possible for farmers to make improvements on their farm with the assistance of Federal funding in order to improve the soil, air, and water quality, which benefits us all.
If you would like more information on the EQIP and AMA programs, please contact your local NRCS office.  For a complete directory please see: www.nrcs.usda.gov.
If you would like to learn more about Full Moon Farm you can contact David Zukermann and Rachel Nevitt via email at davidz@together.net or visit http://fullmoonfarminc.com.