Is it really possible to extract heat from compost to warm your barn, greenhouse or home?  A grassroots research network is finding out. 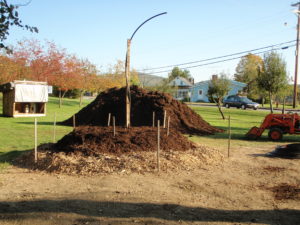 Mound construction starts by preparing a foundation of wood chips. Then layers of compost, roughly 6″ – 18″ thick, are spread over the foundation.

Any farmer is well aware that a large heap of fresh manure, livestock bedding and other organic farm residuals will generate substantial heat for several weeks or months. What is less widely known – and what this article intends to introduce to readers – are the methods for capturing this heat for use on the farm while simultaneously producing high quality organic soil amendment. In fact, a growing number of farm businesses in the Northeast are already generating usable heat from farmstead compostable material! To build upon this progress, Compost Power, a small network of researchers, farmers, engineers and do-it-yourself enthusiasts has been investigating and experimenting with small farm and homestead-scale systems for extracting useful heat from compost. In the following article, I will present some results of our efforts thus far, focusing on those of interest and relevance to farmers at any scale as well as sustainable agriculture and renewable energy enthusiasts. 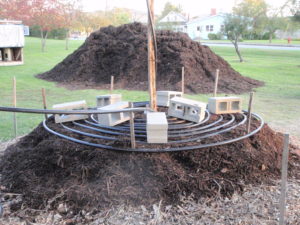 A layer of coiled rigid black plastic water pipe is placed in between the layers of compost.The cinder blocks (2nd and 3rd photos in sequence) are removed when another layer of compost is piled on, so as to keep the coils in concentric loops and avoid tangling.

Before we dig in too deeply, you may be wondering: Does compost really generate enough usable heat? Well, it turns out our ancestors and contemporaries have repeatedly found methods for utilizing the heat by-product of compost. Firstly, records from ancient China depict heat utilization from compost heaps approximately 2,000 years ago. In more recent history, around the turn of the 20th century, in pre-automobile Paris, farmers disposed of the city’s horse manure in composting “hot beds” which heated glasshouses for urban vegetable production [1]. This ancestral wisdom may have inspired post-industrial farmers to explore the value of compost heat capture in sustainable agriculture. 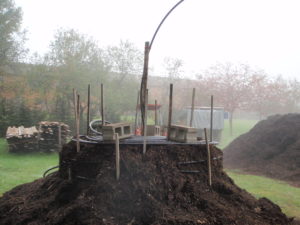 After several alternating layers of compost and water pipe are installed, the pipe ends are connected to the heat load (in this case a house’s radiant floor system).

A rather extraordinary example of compost heat utilization is that of the French farmer and forester Jean Pain, who, through the 1960s and ‘70s, experimented with composting methods on his farm in southern France. In his book [2], Pain describes how he and a crew harvested fire-prone brushwood from his farm to create composting mounds of brushwood. These so-called “Pain mounds” were as large as 100 yards and produced enough thermal energy to heat a batch biodigester and provide the hot potable water needs of the farmstead. In his book, Pain describes equipment he used to capture and utilize the heat, biogas and fertilizer by-products of this integrated renewable energy system. I should note that while compost heat extraction and biodigester technologies have been independently shown to be technically and commercially viable, there is no record of any replication of Jean Pain’s combination of these technologies into a successful enterprise. 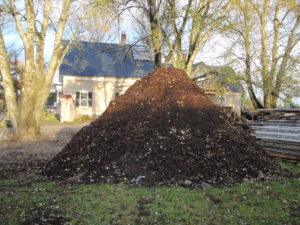 Finally, the mound is “capped” with additional compost to insulate the heat capture system and increase the active composting volume.

Closer to home here in the Northeast, there are a few examples of farm- and commercial-scale compost heat extraction. In the 1980s, at the New Alchemy Institute on Cape Cod, MA, Bruce Fulford and a team of applied researchers evaluated the concept of compost-heated greenhouses for season extension and carbon dioxide enrichment in a commercial farm setting [3]. Since 2005, in Franklin County Vermont, Diamond Hill Custom Heifers (DHCH) has been composting approximately 800 tons per year of heifer manure, bedding materials and local biomass to heat potable water and radiant flooring in its farm facilities [4]. Further north, in New Brunswick, Canada, the Greater Moncton Sewerage Commission (GMSC) has pilot-tested a system to extract heat from outdoor sewage-sludge based compost windrows [5]. Finally, since it’s founding in 2010, the Compost Power team has actively supported the construction or operation more than ten farm and homestead-scale compost heat extraction systems, mainly in Vermont and bordering areas [6].

So far, I have glazed over the exact methods and technologies for extracting heat from compost. All compost heat extraction technologies are based on either air-based and water-based (hydronic) heat capture methods. The best way to explain these two methods is through specific examples of their respective application. Air-based heat extraction is exemplified in Diamond Hill Custom Heifers’ system, which employs Agrilab’s proprietary IsoBar technology [7]. In the DHCH system air is pulled down through active compost piles (an arrangement referred to as “negative aeration composting”) by blowers, which then force the resulting compost-heated hot vapor flow through ductwork and over the IsoBar array. The IsoBars are actually thermosiphon tubes, which rapidly transfer heat from the hot vapors within the ductwork to potable water in an insulated bulk tank with no direct energy input.

By contrast, Jean Pain, the Greater Moncton Sewerage Commission and Compost Power have all employed hydronic heat capture methods. In the hydronic method, a network of pipes in embedded under, around or directly within an active compost pile. Water or glycol/water (antifreeze) solution is pumped through these pipes, which heats the fluid. The hot fluid is then pumped to a suitable heat load device, such as a radiant flooring slab, fluid-to-air radiator, or flat-plate heat exchanger. The compost-embedded pipe network and heat load device are thus connected in a heat exchange loop with associated expansion tank and pump.

Now let’s get to some more specific detail regarding the energy-generating potential of compost. A heat capture rate of 1,000 BTU per hour per ton of active compost is the maximum reported from the compost heat extraction processes we’ve investigated. Such a rate has been recorded to last up to 18 months [2]. However, based on my own observations of this technology and consultation with experts in this field, a more realistic estimation for the heat generation potential of active compost is 1,000 BTU/hr/ton for no longer than 6 months. The heat generation rate and longevity are critical variables in determining the viability of heat extraction technology. As such, the Compost Power network is collaborating with experts in the composting community to develop low-cost methods for confidently estimating the heat generation potential of a given compost recipe. Such a method would allow for more rapid and realistic assessment of the viability of compost heat extraction methods.

I’d like to close my discussion with a few key design considerations for farm-based compost heat extraction systems. It is important that you have a keen understanding of the composting process before embarking on any serious consideration of compost heat capture technology. A seasoned composter will know that critical parameters involved in a proper composting process include the C:N ratio, moisture content, the relative biodegradability, porosity of the compost recipe as well as the geometry and physical design of the active composting mass (pile, mound, windrow, bunker, etc). It’s also important to utilize the heat generation to the fullest extent possible. In a recent feasibility study, a design team including myself, determined that heat extraction technology can only be economically attractive for a small-scale farm if the design matches the farm’s heating and nutrient application needs such that substantial energy and fertility costs are offset. While the calculation is sensitive to some variation, I believe this situation is only possible if compost heat is utilized for at least six months out of the year. And, in order to achieve such a level of utilization, the system may need to incorporate thermal storage mechanisms (i.e. insulated bulk storage tanks) to allow for “banking” of captured heat for short periods of time (like when the sun is out for a greenhouse heating application). This, of course, will result in additional capital costs and operational complexity.

By now, current and aspiring farm-scale composters reading this may be considering how to incorporate compost heat extraction technology into their operation. A good place to start is to estimate how much (approximate volume in yards) compostable material your farm generates, what may be locally available and key characteristics (production rate in tons/month, C/N ratio, moisture content, particle size, etc) of each material. Keep in mind that, oftentimes, composters at any scale are limited by the amount of carbon source they can obtain. Next, consider your seasonal heating needs. Do you have a baseload or regular demand for hot water at 120 F – 140 F? Using an estimate of 1000 BTU/ton/hr of active compost, do any of your heat loads match your compostable material generation rate? You may even start getting a little ahead of yourself like me and consider what new farm enterprise this plentiful heat source might power to improve your farm operation while reducing its impact on the environment. If you find yourself here, or stuck any point in between, be sure to look up Compost Power!

Sam Gorton is a part-time PhD student at the University of Vermont and works as a process engineer involved in the research and development of clean technology. He can be reached at 518-496-4252., at gortonsm@gmail.com or on Facebook and LinkedIn.

Sam Gorton is a part-time PhD student at the University of Vermont and works as a process engineer involved in the research and development of clean technology. He can be reached at 518-496-4252., at gortonsm@gmail.com or on Facebook and LinkedIn.
Posted in Small Farms Quarterly