Sheepfolds, pigpens, chicken coops, and smoke houses:  on a farm with animals, these places have meaning. Cynthia G. Falk writes about the agricultural and architectural diversity of historic farm buildings in her new book: Barns of New York: Rural Architecture of the Empire State (Cornell University Press, 2012). This is a beautiful book about the rich diversity of livestock practices with more than 200 photographs and line drawings. I haven’t seen anything quite like it since Eric Sloan’s An Age of Barns, now a collector’s item. 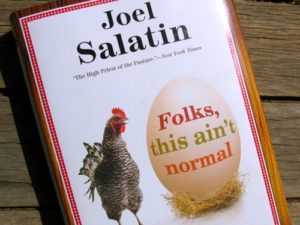 If you’ve never read one of Salatin’s books, you’re missing a distinctive voice with a provocative point of view

Sustainable practices of small scale farming and hunting include a place for meat at the table and there are some wonderful new books about this subject. Passion for good, simple, healthy food is something farmers and hunters share with chefs, urban homesteaders and metropolitan diners in these new books about meat and so much more.
Farmer and evangelist for the grass-fed movement, Joel Salatin’s new book, Folks This Ain’t Normal: A Farmer’s Advice for Happier Hens, Healthier People, and a Better World (Hatchette 2011) points out how alienated most people are from the meat they eat. If you’ve never read one of Salatin’s books, you’re missing a distinctive voice with a provocative point of view. He’s got a wicked sense of humor and a storyteller’s knack. This is his first title with a big commercial publisher and it quickly became a best seller.

Tamar Adler, An Everlasting Meal: Cooking with Economy and Grace (Scribner, 2011), writes essays for the home cook. Inspired by the spirit of M.F.K. Fisher’s How to Cook a Wolf – written in 1942 during wartime shortages – this is a young woman’s account of how to make the most of everything you have including the bones and peels and ends, demonstrating what great chefs don’t want you to know. Part philosophy, part cooking lessons, Tamar Adler writes about boiling water, cooking eggs, using meat and fish resourcefully, and pulling together full meals from empty cupboards. 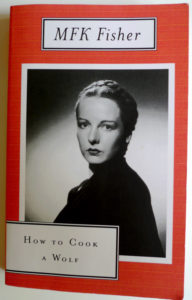 Tamar Adler’s new book, An Everlasting Meal, is inspired by the spirit of this much older book, written in 1942 during wartime shortages.

Roasts for every day of the week is the subject of the new book by the authority on soulful French cooking and author of the popular, Pork and Sons. Stephane Reynaud has a guide to roasting fish and meat titled, Rotis (Melville House, 2011). Reynaud grew up the grandson of a rural village butcher and today owns one of the best restaurants in Paris. Reynaud has appeared on The Martha Stewart Show and NPR’s The Splendid Table. Booksellers from Brooklyn to Maine tell me this is the one cookbook about meat people buy once they see it.

Blood, Bones and Butter by Gabrielle Hamilton (Random House, 2011) is a bestselling memoir subtitled, “The Inadvertent Education of a Reluctant Chef.”  An engaging account of her father’s spring lamb roast appeared as an excerpt in The New Yorker. The problem with this kind of memoir is that it’s more about her dysfunctional relationship with her family than it is about discovering down-to-earth food and how she puts meat on the plate at her much acclaimed restaurant, Prune, in New York City.

Hamilton follows the foodie memoir formula: share a few recipes, intersperse with personal reflection, and structure around tight family narrative. It follows in the style of Ruth Reichl, Tender at the Bone: Growing Up at the Table (Random House, 1998), who served as Editor in Chief of Gourmet Magazine for 10 years until it closed in 2009.  Reichl set the bar for food memoir and Gabrielle Hamilton raised it.

In Girl Hunter, Pellegrini gains respect for hunters who eat what they kill, respect the land, and preserve the wilderness.

Girl Hunter: Revolutionizing the Way We Eat, One Hunt at a Time by Georgia Pellegrini (December 2011, Da Capo) is another memoir from a chef, but one who acquired the passion for good food along a creek bed fishing for breakfast trout. Pellegrini describes the task of catching and killing her first turkeys and how she plucked, prepared, and served them. Her attempt to hunt venison is a near lethal disaster. She writes with self-deprecating humor about the old guys who take her out duck hunting and righteously make a fool of her. She gains respect for hunters who eat what they kill, respect the land, and preserve the wilderness. Tracking her career from under-aged waitress and bar maid to the Catskills campground where the mess hall became her refuge from the city scene of catering life provides an entertaining read.

Hank Shaw’s Hunt, Gather, Cook: Finding the Forgotten Feast (Rodale, 2011) is another new book of interest filled with personal stories and recipes. With this contemporary eat wild narrative, Hank Shaw offers a beginner’s guide to fishing, hunting, foraging, outdoors, and cooking wild meat. This is not, however, a book for hunters, but a book about eating wild.
Meat Eater: A Natural History of an American Hunter, by Steven Rinella (Spiegel &Grau, 2012) explores the disappearance of the hunter and the loss of Americans’ connection with the way their food finds its way to the table. Hunting, Rinella writes, is connected intimately with our own humanity. Thrilling stories woven together with expository information about the natural world and the history of hunting, this memoir offers a fresh examination of our relationship with nature and food. Each chapter concludes with “tasting notes,” for home cooks and those around a campfire.

No matter what your preference — pork, beef, chicken, lamb, goat, turkey, rabbit, venison, fish – there’s a new book here on this list of recent releases to enhance your appreciation of meat and how it gets to our plates.