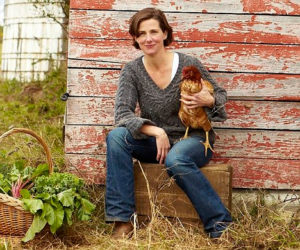 Kristin Kimball is the author of The Dirty Life. Courtesy of KristenKimball.com.

There’s nothing more enjoyable than spending a spring afternoon indoors reading a book while it rains outside or while you wait for the mud to dry. Memoirs export you to a different time and place and put the reader into the shoes walked by the author. The genre of memoir is very popular and there are basically two kinds: those about extraordinary people who do ordinary things and those about ordinary people who do extraordinary things. While some folks like to read about the lives of celebrities, athletes, and politicians, and how they put their pants on just like you and me. I don’t.
I like memoirs that tell a story of personal transformation and there have been so many good books in the past few years about homesteading and small scale farming, but I also dug out a few old classics for this review.
The new trend in small farm memoirs began in earnest when Storey Publishing, known for its how-to guidebooks for small animal farmers, released its first memoir in 2008. Jenna Woginrich began as a big city blogger who set out to build a more self-sufficient lifestyle as an urban homesteader. Her first book, Made from Scratch: Discovering the Pleasures of a Handmade Life, captured the exuberance of a new generation who discovers depression-era common sense. While she blogged for the Huffington Post, Jenna shared her home with a flock of Scottish Blackface sheep, border collie, chickens, hive of bees, geese, rabbits, and some pretty amiable neighbors. Her offbeat observations as she discovers traditional farm skills make it an enjoyable read, especially for someone who is not new to country living. In BarnHeart (2011), Jenna Woginrich returns with another memoir about the state of longing for a farm of one’s own. What she learns in dealing with small-town politics, cranky neighbors, and the loneliness that comes from running a farm single-handedly, is to recognize this longing as not for land but for living a more authentic life.
Memoirs about the personal transformations of becoming a farmer are not all funny or romantic. Kurt Timmermesiter was a bone-fide city dweller in Seattle where he worked as a successful baker, chef, and restaurateur. Growing a Farmer: How I Learned to Live Off the Land (W.W. Norton & Co. 2011) is a memoir about The Little Farm That Could with its disarming honesty as to the stumbles and realities in making a small farm profitable. It’s the story of someone who loved food enough to learn how to raise it, not just prepare it. From practical advice on making your own apple cider vinegar, to cheese-making, raising cows and slaughtering pigs, it’s a foodie memoir.
The Accidental Farmers (Harmony Publishers, 2011) tells the story of Tim and Liz Young who left their suburban life and became first-time farmers in rural Georgia. Seeking a middle path between a meatless lifestyle and the barbarism of factory food, Tim and Liz created Nature’s Harmony Farm. This is not a romance although it begins with this couple’s passion for living in harmony with nature. Instead, it is a realistic account of the heartbreak of raising livestock. If you have livestock, you will have dead stock. It’s not for everyone to read, but those who care about meat processing will find it a fair account of the challenges and heartbreaks.

Kristin Kimball is the author of The Dirty Life.

Manny Howard lives in Brooklyn with his wife, two children, and a dwindling number of farm animals after he turned their 800-square foot backyard into the first farm in Flatbush in generations. My Empire of Dirt (Scribner, 2010) is gonzo journalism in the form of memoir where we learn too much about how sexy his wife is and how little real affinity he has for the animal kingdom. Finally, here’s a city-dweller who understands the extraordinary work of farmers largely through his owned failed experiments. His intelligence and good humor lay bare the economics involved in trying to raise a crop; he’s been a guest on the Stephen Colbert Report.
The Dirty Life is a love story. Single, thirty-something writer working in New York City, Kristin Kimball goes out on an assignment and falls head over heels. “This book is the story of the two love affairs that interrupted the trajectory of my life: one with farming–that dirty, concupiscent art—the other with a complicated and exasperating farmer.” It is discovering the wrenching pleasure of exhaustion from physical labor and that good food is the best reward when she finds the engagement she craved with this man, this small upstate New York community, and a beautiful piece of farm land.
Hit by a Farm (Da Capo Press, 2006) is another farm memoir about a former city girl. Catherine Friend lives in southeastern Minnesota, where she and her partner, Melissa, raise sheep and cattle. “The classic face of farming in Grant Wood’s American Gothic was about to get a facelift: two thirty-something women in bib overalls holding pitchforks,” (p. 6) Living off the land isn’t quite the romantic idyll imagined by many urban homesteaders. At times hilarious and others sobering, it is the first of Friend’s memoirs. Two Women, Fifty Sheep, and Enough Wool to Save the Planet (Da Capo, 2011) comes 15 years after Catherine and Melissa started sheep farming. They’re tired. While it is one of the oldest professions, raising sheep doesn’t get any easier. But sheep might be too valuable to as the number of sheep in America has fallen by 90 percent in the last 90 years. This is a fun story about wool and why small farms are important.
Brad Kessler, acclaimed novelist, lived in New York City but longed for life on land where he could raise his own food. Goat Song: A Seasonal Life, A Short History of Herding and the Art of Making Cheese is a literary account of what it is like to live intimately with animals who directly feed you. He reflects on the history and literature of herding, explores the pastoral roots of so many aspects of Western culture, including poetry and literature, and chronicles living by nature’s rules. This will be the book that stays on my shelf and is pulled down year after year to regain the words that so carefully explain why so many small farmers do what they do.
There’s another memoir I highly recommend along these literary lines that is not new. We Took to the Woods (1942) is a timeless account of living off the land. In her early thirties, in the 1930s, Louise Dickinson Rich took to the backwoods of Maine with her husband; refugees from urban life during the Great Depression. They found their livelihood and raised a family in the remote backcountry settlement of Middle Dam, in the Rangeley area. Rich writes as though her life is an adventure story, full of humor, and paints a portrait of a cherished dream awakened into full life.
“As much as you transform the land by farming,” Kirstin Kimball wrote in The Dirty Life, “farming transforms you.” Each of these memoirs records this transformation in a way that honors the extraordinary experience, expertise, and ethos of ordinary small farm folks.
Jill Swenson is a former farmer and the president of Swenson Book Development, LLC, based in Brooktondale, NY. She may be reached at jill@swenbooks.com or 607-539-3278.