By Lindsay Debach
My father is a butcher. He doesn’t have a potbelly or drape strings of sausages from his hands. He doesn’t have a mustache or wear one of those little straw hats, either. He does boast that he could skin a cow at the age of 10, can strip the meat from a carcass down to the bones and can season ham and bacon to perfection. Like his father before him, who started the Leona Meat Plant in 1963, he’s been in the family meat business his whole life. There was no question who would take over the shop once my grandfather retired.
My Dad and Uncle became managers of the place in the early 80’s. 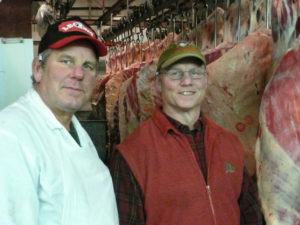 Brothers Chick and Mike Debach, owners of Leona Meat Plant, with fresh cut beef carcasses in the back ground.

Since I was old enough to remember, I’ve known what the inside of a cow looks like, the way a pig twitches as it dies, and that there are exactly 50 cocktail wieners to a pound.  Often we’d watch as people came to drop off animals for the slaughter: cows, pigs, sheep, and on rare occasions, even ostriches would stare blankly from behind the white slats of the holding pens. Whenever friends came over, the visit always included a trip down to the shop, where they’d gawk in amazement at the sides of beef hanging in the cooler, the cow heads in the bone barrel out back, and the puddles of blood that got washed off the kill floor. But the fact is, the blood stains on my Dads’ white apron and coat never deterred me from giving him a hug. I accepted that fact that my Dad cut carcasses all day, that the dog licked his shoes clean some nights when he came home from work and that the knives in our kitchen were always sharp. Being a vegetarian is something that I’d never be able to do with an honest heart. A summer job, a steak on the table, a topic for my college entrance essays: the meat plant served as a backdrop to my youth.
I don’t remember how old I was the first time my Dad asked me to help out in the shop, but I remember it involved measuring bits of cubed beef into one-pound bags. At first, I was pretty impressed with my new post. The oversized butcher coat and apron that I wore swathed me in white and I felt important. But after ten minutes of grabbing the chilled meat chunks and fumbling them into their plastic receptacle, I was — to put it gently — over it. My hands felt like they were going to fall off, and the smell of raw beef gave me a taint of nausea.
Working at the meat plant never did regain its novelty. From 5th grade on, my brother, sister, cousins and I spent our last day of school each year in one of the plant’s coolers doing what we came to refer to as “clamming.” Around the beginning of June the town Vets Club would have their annual clam bake and would order all of their mollusks through the Leona Meat Plant. The gritty clams came to us on a truck in bushel bags of 400 or so, and it was our job to dump them out, wash them, and bag them up by the dozen in little white cheese cloth bags so they could properly bake. While the rest of our class was out enjoying the first hours of summer vacation, the Debach kids were stuck in a meat cooler freezing our fingers trying not to cut ourselves on broken clam shells.
In December, it was ring bologna: we’d have to grab it off the racks where it cooled after coming out of the smoke house, and then cry-o vac every ring. If we needed money, if Dad needed help, if Mom wanted us out of the house, we’d work at the meat plant. There was always something to do, and if you couldn’t find anything then, as Dad used to say, “you can always slice bacon!”
During high school, in order to afford a class trip to England, I made the jump from part-time help to full-time employee when I agreed to work for the entire summer in the retail part of the plant. Somewhere between counting out Hormel Cocktail Smokies and slicing the chipped beef I decided that as soon as I could help it, I wouldn’t ever have anything to do with this place again. I saw butchering as a dirty, smelly, vomit-inducing occupation. One so unglamorous that I was embarrassed to tell people what my Dad did for a living. 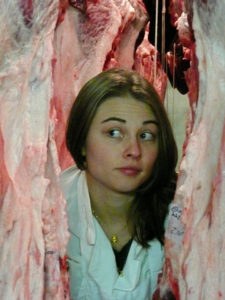 Lindsay Debach poses in between some pig carcasses in the Leona Meat Plant cooler.

I returned to the city jaded. Not by the meat plant I once resented but to the “scene” around me. In my hip Brooklyn neighborhood, weekly butchering classes were attended by hundreds of eager city dwellers and a white meat apron was the new black. Meat specialty shops sprung up, with a novice meat cutter behind a sturdy butcher block, casually wielding a cleaver and moving slow enough to pose for the photographer in the room. But did these “foodies”, these “rock star butchers” heralded by The New York Times and the food blogs know what it was to shoot a cow? Had they ever loaded boxes of beef until their back muscles gave out?

Now I’m coming to terms with the “slaughter daughter” that I am, with the fact that only because of the long days my Dad spent on the kill floor was I afforded the opportunity to go to college, or the connections in New York; the very places I practiced hiding my identity. My father may not be making the front page of any paper, or the buzz of the butchering blogosphere, but he practices his craft because it is what he knows, and knows it well.  He’s not concerned about anyone watching.  And I can now honestly say, neither am I.