Home » Posts » Save the Unicorns and Farm the Forest

Save the Unicorns and Farm the Forest

Through forest farming, I can help to save the Unicorns (Aletrisfarinosa) and you can too. Forest farming is the cultivation of high value specialty crops under the forest canopy.  For those of you not familiar with Aletrisfarinosa, also known by ‘Unicorn Root’, it’s a perennial flowering herb found in open woodlands.
Here in Ithaca, NY at Cornell University, we are developing an educational, demonstration Forest Farming site called the MacDaniels Nut Grove. This site incorporates specialty Hickory trees (Carya sp.) using selections grafted by a former professor, Dr. MacDaniels, that were a part of cultivar trials over half a century ago. These Hickories, mixed with Black Walnuts (Juglansnigra), make the upper canopy portion of our forest farm. 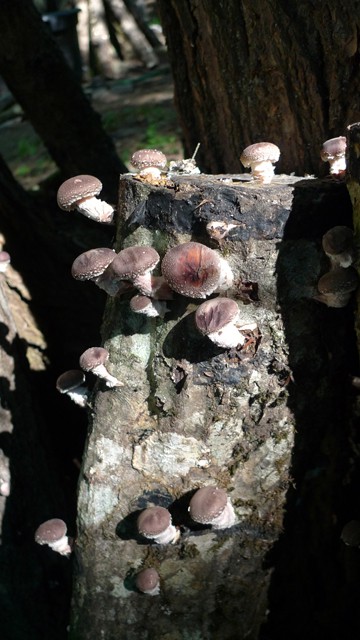 Mushrooms are a great forest product that can supplement your farm income. Courtesy of Dhwani Wiman.

The second layer, below the canopy, consists of trees like Paw Paw (Asiminatriloba), Elderberry (Sambucas sp.), and Service Berry (Amelanchier sp.). The third layer consists of trailing canes and small shrubs like Aronia, Currants (Ribes sp.), and black cap raspberries (Rubusoccidentalis). The lowest level of our forest farm contains perennials such as American Ginseng (Panaxquinquefolius) and Goldenseal (Hydrastiscanadensis), as well as various species of mushrooms, like Shiitake (Lentinulaedodes). We have also been able to incorporate ornamental plants such as two species of the endangered Lady-Slipper Orchid (Cypripedium sp.). While these are just a handful of species we are exploring on the research farm, you local cooperative extension office may be able to suggest varieties that are right for your woodland environment and farm plan.

Collectively, species grown under the forest canopy are often referred to as Specialty Forest Products. These niche products have multiple uses: culinary, medicinal, and cultural.  If you decide to incorporate SFP’s into your farm plan, consider starting out on a small-scale until you have gained an appreciation for the ecology behind the species you are working with.  Lack of sensitivity or knowledge for the proper cultivation and harvest of forest plants has in the past led to over harvest.  Plants like the Lady Slipper Orchid, Wild Leeks (Allium tricoccum), American Ginseng, and yes, the Unicorn too, have all been put in danger of extinction due to over-harvesting and habitat destruction.

If you would like to learn more about forest farming, visit “The How When and Why” Forest Farming Resource Center at http://hwwff.cce.cornell.edu/   The Resource Center has a list of self-guided tutorials that include web text and images, video clips, power point presentations, and links to other on-line information sources.
Or visit MacDaniels Nut Grove during a field day or workshop!  Our website is: http://www.hort.cornell.edu/mng/index.html