By Margaret Fowle
Audubon Vermont is working with the Natural Resource Conservation Service (NRCS) on two exciting programs, called the Forest Bird Initiative (FBI) and Champlain Valley Bird Initiative (CVBI). Both programs engage landowners in managing their land to protect a number of priority bird species in the region. Through these programs, forest, shrubland, and grass landowners are given the tools they need to make decisions about land management that benefit both the land and nesting birds.
In the Fall issue, I talked generally about Audubon’s programs.  In this follow-up article, I highlight some success stories from the field.
Forests
In Tunbridge, Vermont, Fred Pond has been working with Audubon Vermont’s Forest Bird Initiative, the Natural Resource Conservation Service, and his consulting forester to provide high quality bird habitat as part of the management of his 140 acres.  Audubon Vermont conservation biologist Steve Hagenbuch completed a habitat assessment for the property in 2008.  One of the recommendations included in the report was to apply for a Wildlife Habitat Incentive Program (WHIP) contract to assist in the development of early-successional habitat (young forests) for bird species such as Chestnut-sided Warbler and White-throated Sparrow.  This habitat condition was deemed to be lacking on the property and the surrounding landscape. Fred’s application was approved, and through a site visit that included Mary Beth Adler and Ryan Smith from the Vermont Fish and Wildlife Department, consulting forester Paul Harwood, and Steve Hagenbuch, two areas totaling approximately 4 acres were identified for conversion to early-successional habitat.  In the years following implementation Audubon Vermont hopes to be able to monitor the bird response to this management practice.
According to Fred, “I feel fortunate to have Audubon Vermont involved with bird habitat on my land.  In addition to the detailed report I received, providing me with customized, documented information about what birds dwell on my land, I’ve been able to continue my relationship with Audubon, which has been very helpful when new questions arise.  The report has been useful in working with NRCS and the local river partnership in seeking funds to help support bird habitat on my land.” 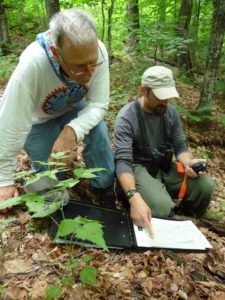 Early Successional Shrublands
Curt Alpeter qualified for a WHIP contract to manage for early successional habitat and to remove invasive honeysuckle and buckthorn on his 42 acre property in Charlotte, Vermont. Danny Peet from NRCS invited Audubon biologist Mark LaBarr to visit the site and assist in developing a conservation plan that would include work that would benefit priority shrubland bird species. Dave Adams from the Vermont Fish and Wildlife Department also joined the efforts. In addition to this visit, Mark conducted bird surveys on the property and located priority species such as Golden-winged Warbler. Mark provided Curt and NRCS with a written assessment and then worked with Adams to fine tune areas delineated for NRCS practices. Thickets of native shrubs were marked to be saved and areas of heavy invasive infestation were marked for removal. In addition, shrubland habitat that was reverting back to forest was identified and slated for manual clearing and brushhogging. Mark has since conducted post treatment bird surveys to assess the effectiveness of the work done and determine how the birds have responded. Curt has subsequently re-enrolled in WHIP to create additional early successional habitat on his property.
Grasslands
Audubon biologists Mark LaBarr and Margaret Fowle have been working with NRCS to help promote the EQIP Grassland Bird Management practice.  This practice has paid landowners up to $135 per acre for 3 years for performing an early hay cutting (before May 31) and waiting 65 days before the next cut.  The payment is intended to compensate landowners for loss in quality of the hay from the delayed second cut.  Qualifying fields must be high quality habitat for grassland birds so they are rectangular or square in shape, at least 20 acres in size, and have less than 10% reed canary grass.  The 65-day waiting period has been proven to be enough time to allow any nesting grassland bird species such as Bobolinks or Eastern Meadowlarks to renest before the next cut.  This is significant in that agriculture is maintained on the field (up to 3 cuts of hay per season) while providing breeding success to grassland birds nearly equal to fields not cut during the breeding season.
Margaret Fowle completed a habitat assessment for a former dairy farmer in Shelburne, Vermont in 2010.  The farmer’s hayfields appeared to meet the criteria for the EQIP Grassland Bird Management practice .  Fowle and Danny Peet from NRCS met the landowner in the fall of 2010 to assess whether or not one or both fields would qualify.  In the end, one 24-acre field qualified and was contracted in EQIP and the Grassland Bird Management practice is scheduled to begin in the spring of 2012. The other field did not meet the required qualifications due to the wetness of the soils and a large hedgerow that was growing in a portion of the field’s center. Audubon Vermont hopes to be able to monitor the success of the prescribed cutting schedule with the landowner this coming spring.
Unfortunately, due to a national initiative for payment consistency, the EQIP Grassland Bird Management  practice has been discontinued in Vermont and elsewhere for 2012, so no new early/late cut contracts will be signed.  Audubon Vermont is working closely with NRCS staff to reinstate this practice for 2013 and beyond.  NRCS in Vermont still offers the traditional and quite successful grassland bird conservation practices for delayed mowing which involves no cutting until August 1.
More information on these projects can be found at http://vt.audubon.org/ under Science and Conservation. If you would like to visit personally with Fred Pond about his experiences with fostering bird habitat you can contact him by mail at PO Box 64, Tunbridge, VT 05077 or email pondfc@yahoo.com.
To locate your local Audubon service center, see http://www.audubon.org/locations/type/304.  More information on NRCS programs and contact information for your local service center can be found at http://www.nrcs.usda.gov
Margaret Fowle is a conservation biologist at Audubon Vermont in Huntington, VT.  She can be reached at mfowle@audubon.org or (802) 434-3806.