January 9, 2012/Aaron Englander
Welcome to the Northeast SARE Spotlight!
SARE (Sustainable Agriculture Research and Education) offers grants to farmers, educators, universities and communities that are working to make agriculture more sustainable – economically, environmentally, and socially. Learn about whether a SARE grant would be a good fit for you.
Erin Forbes of Overland Honey in Portland, Maine has an innovative idea for how northern beekeepers can establish healthy new colonies in time for spring pollination.  Traditionally northern beekeepers rely upon packaged “Italian” breed bees from southern and western states.  The package colonies tend to be stressed, have high pest and disease rates, and are poorly adapted to the northern climate. 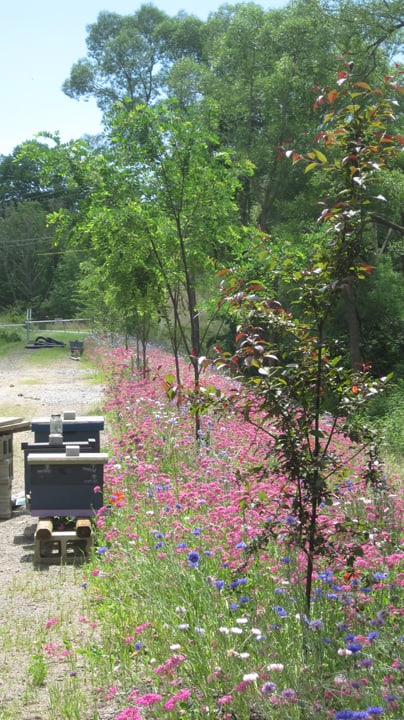 Introduction
The yellow and black honeybee mailbox that marks Erin Forbes’ driveway is the first sign that she is a devoted keeper of bees.  Her drive off of an urban Portland street is wooded and feels rural winding up a hill and through dense vegetation for a quarter mile before reaching her pleasant home.  Upon arrival at least a dozen hives, warmly painted with bee friendly shades of blue, green and yellow, are immediately visible in a pollination haven of flowering trees and wildflowers.  The entire landscape of the 7-acre property is planted for the bee’s palate and superb honey production: fields of perennial and annual native wildflowers, locust, linden, tupelo and apple trees, beach roses and clover-filled lawns.
Erin Forbes is a master beekeeper with 9 years experience.  She tends roughly 70 hives in Cumberland County, Maine, and teaches apiculture for the Cumberland County Cooperative Extension.
The importance and necessity of honeybees is no secret.  In Erin’s words honeybees are a ‘keystone species’ that serve as a ‘hinge-pin’ for many other species.  Erin says, “They pollinate plants and therefore provide food for many species up the food chain. Honeybees can be manipulated and are needed for pollination of commercial farms.”  However, over the past 10 years honeybees have suffered increasing health issues including varroa mites, exposure to pesticides, and Colony Collapse Disorder (CCD).

Problems Sourcing Honeybees in the Northeast
The main objective of the SARE project was to address major problems with sourcing of honeybee colonies in Maine and New England.   The vast majority of Northern beekeepers start a honeybee colony by purchasing a “package,” which is a shoebox-sized box containing three pounds of adult bees and an unrelated queen.

The vast majority of Northern beekeepers start a honeybee colony by purchasing a “package”. Courtesy of Aaron Englander.

Packages generally come from southern states (i.e. Georgia, Alabama, Texas) or California where the bees tend to be the Italian breed (Apis mellifera ligustica), which is not well adapted to northern climates.  Other problems with packages are that the bees arrive stressed and rates of disease, parasite, and varroa mites are relatively high.  Many colonies started from packages do not survive the winter.

The other supply option for northern beekeepers is a northern raised nucleus colony, or “nuc.”  Overwintered “nucs” are 5-frame mini-hives comprised of a queen and her daughters, pollen, nectar and honey.  “Nucs” are better adapted to the New England climate than the package colonies because they are hybrids of northern breeds (Apis mellifera mellifera).  As well, the bees are less stressed because they are from one colony that has been working together already.  However, “nucs” are not available until early May, too late for early-season fruit pollination in New England.  In addition, northern “nucs” are in short supply in New England: roughly 2,000 are available each year, compared to the demand for well over 20,000 new colonies.  “Nucs” are difficult to transport (must be picked up by the beekeeper, not shipped through the mail), $40-60 dollars more expensive per hive than packages, and have an increased tendency to swarm, which is colony level reproduction.  Swarming typically occurs in the spring in healthy beehives when an older queen bee followed by a large percentage of her workers leave the hive in search of a new home.

The Research Question
So the question arises, how to source honeybee colonies in the northeast in a cost- and time-effective manner?  Erin Forbes’ idea of requeening a package hive with a northern queen is one promising alternative to the “treadmill of purchasing commercial packaged bees in the spring and losing the colony over the winter”. The package hive is requeened in June when northern raised queens first become available.  Honeybees live for only 60 days, so by September, the entire hive will be comprised of the progeny of the new northern queen: genetically northern breed bees, well adapted to the New England climate 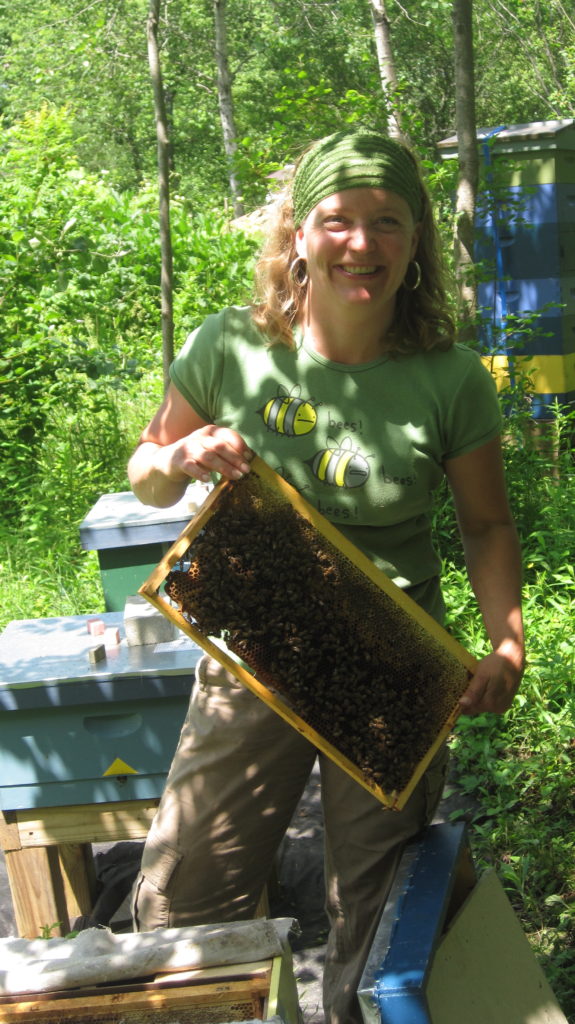 Erin Forbes’ idea of requeening a package hive with a northern queen is a promising alternative to purchasing commercial packaged bees in the spring and losing the colony over the winter. Courtesy of Aaron Englander.

For the SARE project Erin investigated the colony strength, survivability and honey-production among colonies of requeened packaged bees, traditional commercial packaged bees, and northern “nuc” bees.   In her project she tested 54 hives: 18 “nucs”, 18 packages, and 18 requeened packages.  All of the colonies were raised with identical new hive equipment, uniform feeding regiments, and overwintering techniques.  The hives were evenly distributed in 4 different bee-yards over two years.

Evaluation of the hives performance was based on disease presence, parasite loads, surplus honey production, and winter survivability rates.

Project Results
The results were quite promising.  Many more of the package colonies (requeened and conventional) produced a surplus honey crop than the “nucs” (mostly due to the high rate of swarming in the “nucs”).  Honey production by the 54 colonies was measured, even though first-year colonies are not typically expected to produce surplus honey.  Only 13 hives produced surplus honey.  Table 1 describes the breakdown and averages of honey production.

Results are reported for 13 hives of each type. The remaining 5 hives of each type are not included because they were at a site where pesticide damage was suspected. Disqualified colonies swarmed and did not successfully requeen. Courtesy of Aaron Englander.

The second table presents hive strength and survivability as rated by Erin the April following hive establishment.  Data from 39 hives (13 of each type) are presented because in the second year of the project one of the bee yards experienced a pesticide incident that removed a group of 15 colonies (5 of each type).  Erin considered successful survival to be a rating of “strong” or “average” in early spring.
Over the two-year trial, the 9 of the 13 requeened package colonies successfully survived (69%) compared with 5 of the 13 conventional package colonies (38%).  The northern nucs showed the highest survival rate (10 of 13 or 77%).  Disease and parasite loads were higher in the packaged hives than the “nucs”, not surprisingly leading to the higher mortality rates in those colonies.  Interestingly the requeened packages seemed to better handle the higher disease and parasite loads than the conventional packages.  Greater disease resistance, genetic adaptation to the northern climate, and the management technique of “breaking the brood cycle” through the process of requeening may explain the increased rates of survival and strength of the requeened packages over the conventional ones.
Erin was pleased with her results and the outcome of the project. However, in an interview, Erin made it clear that “a bigger, more formal study is necessary. This study was small, and didn’t ‘prove’ much…I can just say that these were my results with 54 colonies over 2 years.  Somebody should do a ‘real’ study on just packages, requeened and not requeened based on my project; that would be worthwhile”.   Perhaps that will be the next SARE project.  Looking forward, Erin stresses the importance of increasing the production of northern “nuc” colonies in New England, another potential SARE project for the northeast apiculture community.

Spread the Word
Overall, Erin feels that the outreach she has conducted conveying project has increased education and awareness for new and seasoned beekeepers throughout Maine and the northeast.  Reflecting on the projects’ influence upon apiculture, Erin said, “This was a demonstration project to get people thinking about where their bee colonies come from and the implications of their purchasing choices on bee health and vitality, regionally and nationally…I got so much good feedback, people loved it”.
The passion, knowledge, care, intuition and foresight that Erin applies to her beekeeping is truly inspiring and informative.  When asked what the best part of the SARE project was, Erin responded, “The actual beekeeping.  I fell in love with every single colony.  Even the package (colonies), I had such a crush on them.  It was ridiculous.  This is why I’m a beekeeper”.
Inside and outside the comb, this SARE project was an important step to solving major problems that restrict the sustainability, economic viability and overall success of northeastern beekeepers.  With the continued hard work of Erin and other experienced apiculturists, the health of the bees and the production of their honey can improve every season.
Click here to learn more details about her study and results…..   http://mysare.sare.org/mySARE/ProjectReport.aspx?do=viewRept&pn=FNE10-694&y=2010&t=0

Aaron Englander is a graduate student at the University of Maine.  He may be reached at aaron.englander@gmail.com.
Posted in Small Farms Quarterly