By Lindsay Debach
Chef Dennis Spinna remembers when he found a lamb carcass at the front door of his Brooklyn restaurant. “The legs were sticking straight up and everything!” He shares this over a cup of coffee on the patio of hip Williamsburg eatery Roebling Tea Room. 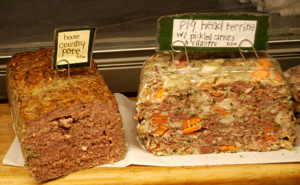 A pig head terrine on display in the Marlow and Daughter meat case. Photo by Lindsay Debach

Dennis is a veteran of the whole carcass program, a sustainable alternative to buying boxed prime cuts. This budding trend in the New York culinary scene sees restaurant owners and chefs purchasing entire beef, pig, and lamb carcasses directly from small farms for use in their entirety (head, offal and all) on a creative gourmet menu.
Unlike restaurants that buy only choice cuts from a large meat purveyor, Roebling doesn’t have the luxury of serving choice steaks every night or even having a “set” menu. Instead, what’s served weekly at this eatery must coincide with what meat is available from a carcass, no matter how unappealing.
“We take all the garbage and make something nice out of it,” is Dennis’ rather ironic philosophy behind how he does things at the Tea Room. “It’s always going to be a little different and a little wacky sometimes…nothing’s going to be exactly the same, but it’s fun.” For example, he’ll feature pig shanks as an entrée one night and braised beef cheek the next.

Marlow and Daughter, a small NYC butcher and specialty shop that take pride in sourcing and selling meat from local farmers. Photo by Lindsay Debach

A few blocks away, are the equally ambitious Marlow and Sons and sister restaurant Diner. These trendy establishments work with old-world style butcher shop Marlow and Daughters across the street. “Daughters,” as the locals affectionately call it, shares 3-4 pigs, 2 lambs, and about 2 beef a week with commonly owned restaurants Marlow & Sons, Diner, and Italian bistro Roman’s. Between the four, every piece of meat, be it tongue or t-bone, is sold on the menu or from out of the butcher case.
“We use absolutely everything,” says Scott Bridi, the chef-turned-butcher at Daughters. The shop takes care of the sourcing and deals directly with the farmer as well as utilizing difficult menu items like the offal and trim in ways that restaurants cannot. “We use the pig heads to make a pig head terrine (head cheese)…I make a country pate with pork and duck liver. Hearts and tongues go to Diner for their brunch menu.” And Diner’s delicious “100% grass fed burger” makes good use of the 200 lbs or so of ground beef that come with a whole steer.
Since there are generally only enough steaks and roasts for one night’s dinner service, the menu must be changed every day. Marlows and its sister restaurants have Scott at the butcher shop to help them in a pinch “Essentially, if [the restaurants] make a request for something that we haven’t processed, sold to anyone else or used in something then they can have it and we’ll use something else.”

Dennis, who for two years bought whole beef independently from various distributors, found that without a linked butcher shop to aid in sourcing livestock, selling offal and even storing carcasses, an entire cow is a bit much for one restaurant to handle. “That was a lot of beef for a long time….that’s crazy. Anywhere from three to four hundred pounds!” His small walk-in cooler only added to the problem of storing a carcass. And transport, as he fondly jokes, was “shady” at best.
He found the perfect solution when Tom Mylan, former butcher for Marlow & Daughters, opened the kitschy but practical Meat Hook. Now Tom sources, cuts and stores the animals for Dennis, using what Roebling can’t feature on the menu to sell at the shop. Tom’s even got the less popular organ meats covered: “We take the beef hearts and grind those with the pig hearts and the pig tongues and make jerky sticks out of them.” Even the pig skin is used to make scrapple.
Both Marlows and Roebling source much of their meat from Kinderhook farm, in the Northern Hudson Valley. Owner Lee Reigny’s 350-400 head can support the 2-3 weekly beef demand from the Meat Hook and bi-weekly steer from Marlows. Animals are butchered and sent in halves or quarters to the city via Regional Access, an Ithaca-based transport company. Because Lee must know months in advance how many beef he will send to the city, planning ahead is very important for the restaurants.
“[Farmers] need to know anywhere from 2 weeks to 2 months out when you’re going to need another pig, an extra pig or an extra side of beef…” says Scott in describing how he and fellow chefs make the system work. “We have to be a little bit ahead of the game….and give a heads up to the farmers.”
Tom at the Meat Hook and the folks at Roebling make regular trips to Lee’s farm, seeing the same animals that they are selling at their establishments. Like others who are dedicated to such a complex system, Scott sees the larger picture. “Doing things like this helps me see what’s up and see how important it is and…just get a better sense of the grander scope of what we’re doing.”
Despite higher plate prices, transportation problems, and the constant menu tailoring that must take place to accommodate whole animals, buying by the carcass is a highly regarded system that’s growing in popularity. “You’re always limited if you’re doing stuff in a responsible way…that’s part of the challenge of it,” says Dennis. And though it may take a while for pig head terrine to catch on, those involved have finally begun to make fine dining and sustainability an agreement, and not a contradiction.
Lindsay Debach is a writer for Lancaster Farming Newspaper. She also works at her family’s business, Leona Meat Plant in Troy, PA. You can reach her at Lindsay.debach@gmail.com
This article first appeared in Lancaster Farming Newspaper on 7/3/2010 and is reprinted with permission.