Home » Posts » God Save the Beef: Trials of Sustainable Farming in the UK

God Save the Beef: Trials of Sustainable Farming in the UK

By Lindsay Debach
It’s 10am on a Friday morning and I am surrounded by the smell of raw fish, smoked bacon, roasted almonds, fresh-picked tulips, the River Thames and wet pavement. This is the lively feast for the senses that is London’s Borough Market, a popular weekend farmer’s market located in central London. 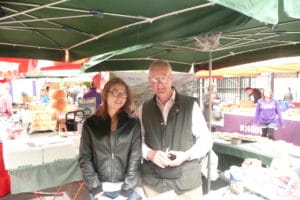 I visited this famed bazaar upon a recent trip to England to meet with farmer Richard Vines, who raises his Devon-beef on the nutritious wild grasses of the English countryside, or “moor.” During our brief interview, Richard tells me about the traditional farming methods still employed by local British farmers in the shadow of vast industrial meat producers. And I’m shown that beneath the cheerful din of bustling market booths is an increasing feeling of frustration as livestock-owners face the mounting challenges of sustainable farming.
Richard’s stand sits at the back of the market space, amongst a less-apparent huddle of booths. A sign reading “Wild Beef” is draped before a table piled high with packaged cuts of meat from his homegrown Devon beef.
“You must be Richard!” I present my hand and he greets me with a curious smile, welcoming me back behind his table.
With articulate patience, he tells me about his 120-head herd, and that he manages to retail a 1400lb steer for about $3,700.00 by selling at two weekly London markets and making a few home-deliveries. He prides himself in his methods of farming: since 1992, he’s been raising purebred Devon animals strictly on the sweet, nutrient-rich grasses of the countryside around his home. When not in the barn, they are free to wander the open “moor,” part of Dartmoor National Forest, a 368 square mile swath of open country that dominates the southwest corner of England.
Surprisingly, the animals stay within a certain distance of their home, products of an ancient system called “leering,” in which herds and flocks are trained to return to a designated field. It took Richard 10 years to “train” his herd to stay on their hillside, an arduous procedure that he began by feeding them in the same place every day. “In the winter we used to be allowed to feed them on the common, so I’d go out twice a day…and I’d put down some hay…and eventually they got to wait for me.” 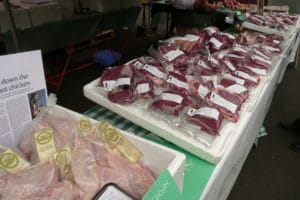 But this method has since been prohibited after conservationist groups forbid winter feedings on the moor in an effort to preserve wild plant life.
After 2 years of life in the fields, Richard’s animals are taken- at the rate of 2 a week-to a small local slaughterhouse, one of the few facilities left in the area:. “Where there used to be 20 [butchers] there are now 4.” Small farmers also face increased processing costs as a result of the expensive meat inspectors or “vets” abattoir-owners must have on the premises. “They [inspectors] just push the costs up here. I used to have a beef killed and cut for about £220.00 ($330.00). A beef is now costing £350 ($528).”
About halfway through our interview, I begin to notice a trend: with every step of the farming process, comes an ever-growing obstacle. Even with its rich farming climate and blossoming desire for local meats, the UK, much like America, suffers in the wake of a ubiquitous and convenient industrial food system and stringent food inspection policies regulated by the government.
The trials continue at the marketplace, as Richard explains his declining retail business: “the market has marginalized us, we’re now at the back quarter…So, there’s partly that, partly the recession, partly competition.” The Friday spent at the now “touristy” Borough Market has become a liability for him: “I could sell in one morning what it now take me 2 days to sell.”
It’s not just a shifting market demographic at work here, but as Richard wisely observes, “there’s such a lack of understanding about what things really represent.” While consumers support the natural, sustainable methods of farming he employs, “the way people want to live their lives, in total convenience, is actually meditating against it [sustainable farming].”
National grocery chains like “Tesco’s” and “Marks & Spencer,” are known for the quality of their meat selection. Unlike most American grocery stores, they often feature a range of organic and natural meats that come cut, labeled and seasoned. Local farmers have a hard time competing with such convenience.
I leave the market that day feeling a bit overwhelmed: with so much working against him, I wonder what gives Richard the drive to continue farming. But I suppose it’s the same reason any of us are willing to sacrifice convenience for sustainability: because we are able to look past the now and see the long-term benefits. As a wise English farmer once told me: “if we produce food like this, in our own country at our own costs, it’s going to be expensive. But we believe it’s better.”
Lindsay Debach is a writer for Lancaster Farming Newspaper. She also works at her family’s business, Leona Meat Plant in Troy, PA. You can reach her at Lindsay.debach@gmail.com
The above article was originally published in the Lancaster Farming Newspaper, on  May 29th, 2010 and is reprinted with permission.