‘A Truck Transition’ first appeared in Lancaster Farming on May 22nd, 2010 and is reprinted with permission.

A tear fell from my eye onto the window sill below as I watched my youngest daughter travel down the driveway on her first solo run.  As she drove away in my old battered, slightly rusted, bumper stickered Dakota pickup, I realized my friend that transported me to check the cattle, give my grand dad a Sunday drive away from the nursing home and carried a farmer’s passion to D.C. was going through a transition — A truck transition. 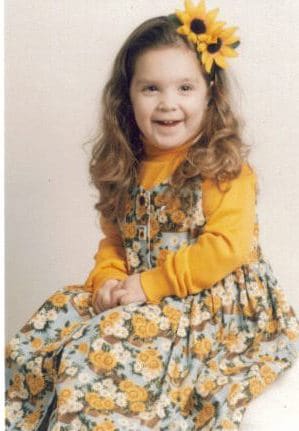 Katie in her sundress as a little girl. Courtesy of Troy Bishopp.

It wasn’t too long ago that Katie used to travel with me in a booster seat or “rooster” seat as she called it and play with little dinosaurs and Rugrat dolls.  It was imperative to keep the radio locked onto KISS FM or play The Land before Time’s soundtrack over and over again.  I have been down this road before with daughters Lindsay and Sarah listening to The New Kids on the Block, Nirvana and a worn-out cassette of Mary-Kate and Ashley Olsen songs.  There were always plenty of adventures when Barbie, Ken, Jem and Della the cow inhabited the cab.  You should’ve seen the peculiar looks from the cattle when a sun-dress wearing little girl wielding a poly-post, and belting out “Smells like Teen Spirit” burst into the paddock.

Ah, the memories of truck time.  It’s important to recognize the bond between a man (or woman) and his or her pickup as very special.  Heck, how many songs or movies have used this agrarian mode of transportation as the theme?  My connection to this hunk of steel, rubber and vinyl is a long one.  Reciting from my past, my list of motorized compadres include:  A 1948 Ford, 1967 3 speed on the column Chevy, 1990 Isuzu space cab, 2001 Dodge Dakota and current 2004 F-150 king cab, 4-wheel drive.  If you notice, I usually keep my buds around for awhile.  They become like family.

There’s no big secret that in our household, Mom is the better driver education trainer with a size appropriate car, devoid of any bumper-stickers saying “Save the Crabs, Then Eat’em”.  I mean really, who could argue the point since I have been known to take a few short cuts, back-up on the thruway cause I missed an exit and do my own modified parallel parking and 3 point turns.  I like to call it–being seasoned.  These behaviors are scorned when taking the road test but it was funny to relive the dad moments and have some laughs while my Katie was anxiously awaiting the “brownie” to give her the test towards parental freedom. 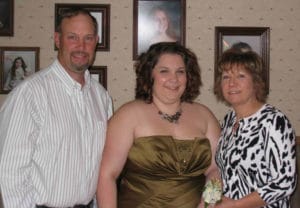 Katie with father and mother, Troy and Corrine just before Highschool Prom. Courtesy of Troy Bishopp.

The tester looked military-like, sporting a jacket with coast guard insignias and a flat-top haircut.  I said good morning and referenced something about riding with a farm girl while I exited the vehicle, as if it would help her get extra points before the test began.  Standing on the curb, I watched as the blinker came on to turn right and she yielded to a pedestrian.  Mom taught her well.  In ten minutes she  transformed from a “Little Tikes” foot powered crasher into a real, insurance paying legal driver.  Do you remember how good it felt to drive your parent home for the first time?  No amount of words could describe the smitten, wry smile all the way home, indicating this virgin ride was well, priceless.
It was time to dust off the pickup which was parked in the field, patiently awaiting the new driver.  “We need to get it up to Sangerfield Tire to check it over, replace two tires and get a NYS inspection”, I said.  Retiring a truck for six months cost dad 500 bucks as the rusty brake and power steering lines both sprung leaks.  When I drove it home from the shop, I became acutely aware of how much stuff can collect in an extended cab over time and that Katie will have to clean it and customize her new ride.

By the time I saw my manly workhorse again it was equipped with a new CD player, a pink steering wheel cover, fuzzy dice and the old seat covers were gone revealing a nice, gray-colored palate.  The Graze-A-Palooza and Save Gas-Let’em Eat Grass window stickers were all gone but two slogans remained: Farm Girls Rock and Cowgirls Up.  These sayings speak well about a country girl and her transitional truck.

I must confess a certain amount of pride when I look at my last daughter getting into my old wheel-horse with the weathered Bishopp Family Farm logo on the door.  I think we’ve done alright in preparing her for the future journeys of life.  She may never know how the memories of her napping with a herd of toys or belting out lyrics together in the cab on a road trip shaped our relationship together forever.  And will she appreciate being relentlessly waved to in our community from folks who know that signature, black Dakota pickup.  What I know for sure is; a daughter and her truck is a beautiful thing.

Troy Bishopp, aka "The Grass Whisperer" is a grass farmer and grazing specialist for the Madison Co. Soil and Water Conservation District and the Upper Susquehanna Coalition in central New York.  To read more of Troy's essays, visit http://www.thegrasswhisperer.com/
Posted in Small Farms Quarterly