The Schefflers respond to the growing demand for local, organic food

Seasoned dairy farmers Ed and Eileen Scheffler have learned over the years that adapting the farm business to changing times is the only way to succeed.  For the Schefflers, being small has made adapting their business easier because they haven’t made huge investments in infrastructure or equipment that would tie them to one type of production.
This became particularly useful about a decade ago, when Ed and Eileen noticed the growing demand for organic and locally produced food.  “We didn’t like spraying chemicals,” says Ed. “Organic seemed like something we could do, something viable.” Change can be scary, and this choice required a willingness to change one’s mind. The Schefflers began the transition to organic and sold their first organic milk in December of 2003. They sell to the Organic Valley co-op and have been very happy with organic prices; the increase in income has helped them invest in a retirement account and send their children to college. Ed notes that they haven’t seen a significant yield decrease since the transition, an experience that challenges the conventional wisdom that organic simply can’t produce enough food. They do spend more time cultivating, but Ed believes the price of increased labor balances out the cost of chemicals they used to spray, and is a better stewardship practice.

Fresh eggs and milk for sale in the farm store. Photo by Adrienne Masler

The Schefflers like to do as much of the labor by themselves as possible, so they have made a point to invest in equipment that will help them work efficiently and achieve high-quality products. For example, the stationary mixer installed in 2008 replaced a Rissler cart (a mobile mixer) and Ed is now producing a much more consistent ration for his cows. When it comes to growing crops, Ed prefers to plant and harvest when the time is right. He says, “It’s difficult to see getting a custom operator to the farm on my time.”
DIRECT MARKETING
Eileen began direct marketing her organic eggs in 2008. After a few false starts – the snowplow buried their roadside cooler and customers couldn’t see the cooler on the porch – they decided that Ed’s new heated motorcycle shed could double as a farm store. They added grass-fed organic beef shortly afterward; the beef is processed in aPennsylvaniaslaughterhouse that is certified organic and humane. They also obtained a raw milk permit in 2009. Customers call ahead to place their order and pick up their milk at the farm store on Tuesdays. “People are looking for a high-quality product, they want to know their farmer and where their food comes from,” says Ed.

Eileen’s eggs are selling out every day; she considering expanding production. Photo by Adrienne Masler

Direct marketing is also a way to diversify the operation and to add value by selling their products at retail value. Ed and Eileen enjoy talking to their customers and rely on word-of-mouth to attract new customers; they also sell at one farm market. Eileen’s egg cartons bear the motto “Sharing our healthy harvest with you” and she says, “That’s really what I believe – I really want to get good, wholesome food to people.” Their customers’ stories are inspiring. One woman reversed severe gum disease by eating natural foods and a high-fat diet, including Schefflers’ raw milk. Others are able to drink raw milk after years of avoiding pasteurized milk (lactase, the enzyme that digests the milk sugar lactose, is present in raw milk but is destroyed by pasteurization). Some customers are concerned about their overall health or simply want a relationship with the farmers who supply their food.
ADAPTING ON A SMALL FARM 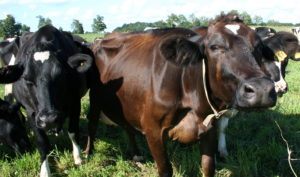 The Schefflers are happy with their current practices. They enjoy farming without chemicals, not relying on commodity pricing and government subsidies, and having input into theOrganicValleyco-op. Most importantly, says Ed, “it’s fun again.” They don’t have plans to make direct marketing a bigger part their operation immediately, but they may start growing more beef animals; “We hadn’t anticipated such interest in our beef,” says Ed. He mentions that they are selling out of eggs every day and that they could probably expand egg production without much investment. They currently sell 9 gallons of raw milk per week – the rest is sold in bulk to Organic Valley– and don’t plan to expand their on-farm sales. The current market for organic milk has been affected by the economic recession just like every other sector, but the Schefflers aren’t panicking.  Whatever changes come to this small dairy in the future, Ed and Eileen are ready with open minds, knowing their approach to farming has brought them a long way.
Adrienne Masler is a recent graduate of Cornell where she majored in agricultural communications.  She may be reached at amm428@cornell.edu.