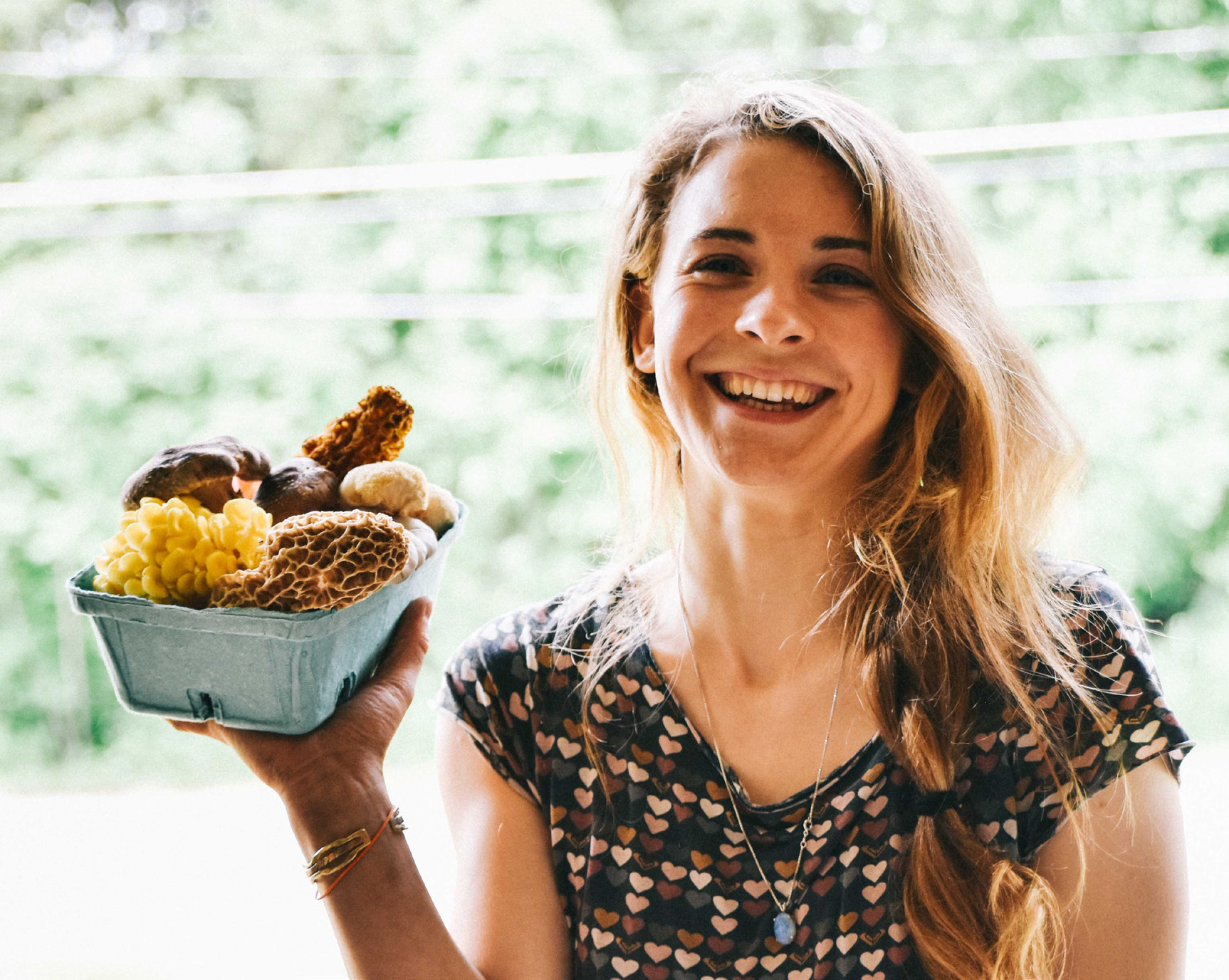 In North America, button, crimini, and portobello (Agaricus bisporus) are the most commonly cultivated mushrooms, making up 92% of mushroom production. (USDA-NASS, 2018) All other species of “edible” mushrooms are considered specialty mushrooms. Of the thousands of species in this category, a very small amount are cultivated, but those that are offer strong prospects. Opportunities exist to offer fresh specialty mushrooms to local markets and develop value-added products within the food and medicinal product sectors. The two most common specialty mushrooms are shiitake and oyster but lion’s mane, chestnut, maitake, and cordyceps are increasingly becoming available in the marketplace. 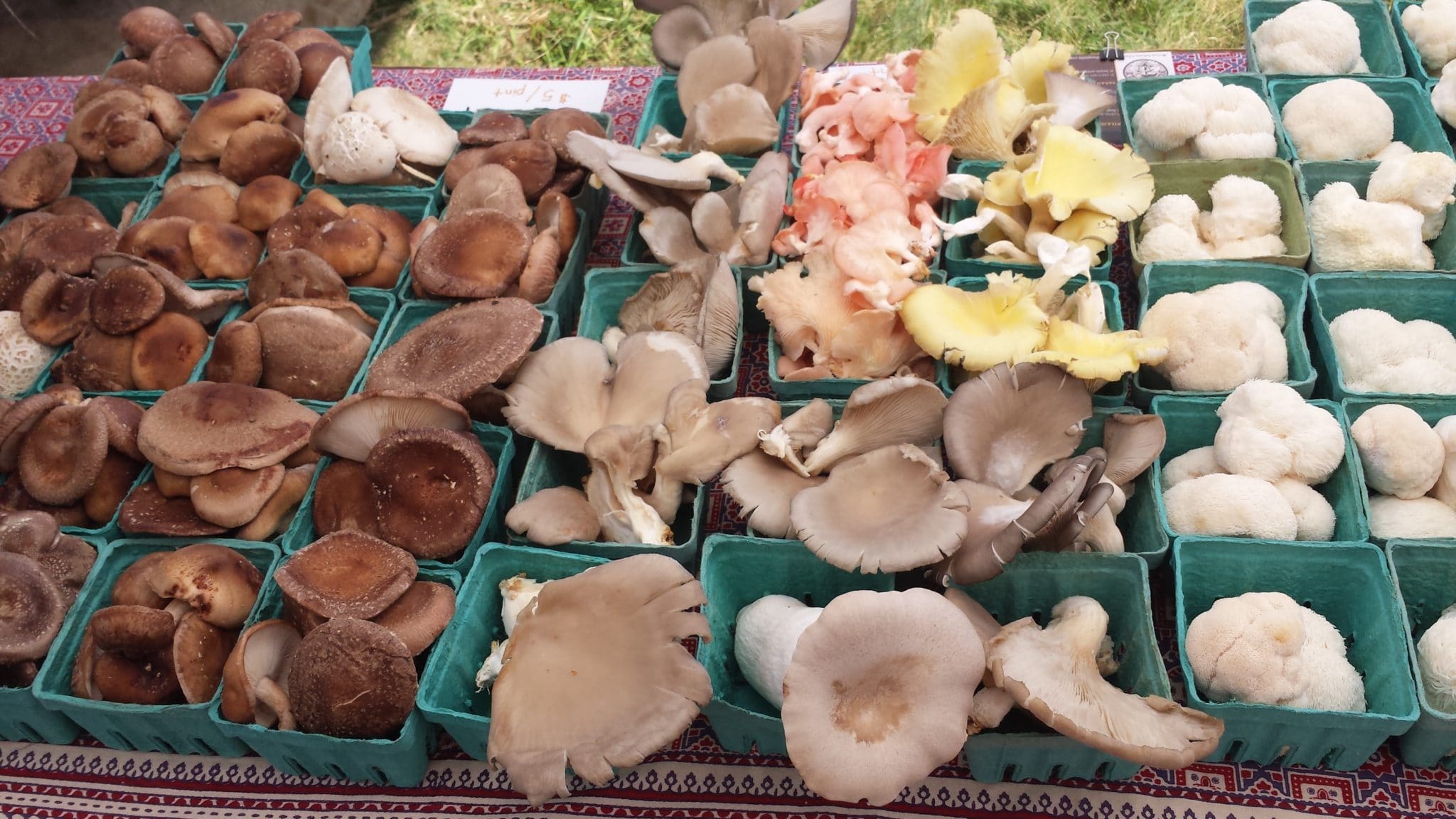 The main body of the organism is known as mycelium, which grows in multiple directions as it seeks food to digest. All fungi digest food in their environment
with enzymes that are produced by the mycelium. Mycelium only has one cell wall so it is extremely sensitive to moisture loss. Because of this, to find mycelium in the wild you need to roll over logs or dig into the leaves where moisture content is higher. Mycelium is what cultivators need to grow before fruiting mushrooms. Any good tomato grower knows they need to grow healthy plants to produce beautiful tomatoes. Likewise a mushroom farmer must cultivate healthy mycelium FIRST and then create a favorable environment for mushrooms to fruit.

Fungi are a kingdom of living organisms that include an estimated 1.5 - 5 million species, though only about 5% have been named. Fungi are classified by three unique factors:

1. Their cell walls contain Chitin;
2. Their mode of digestion is absorption;
3. They are heterotrophic, (meaning they cannot produce their own food.) 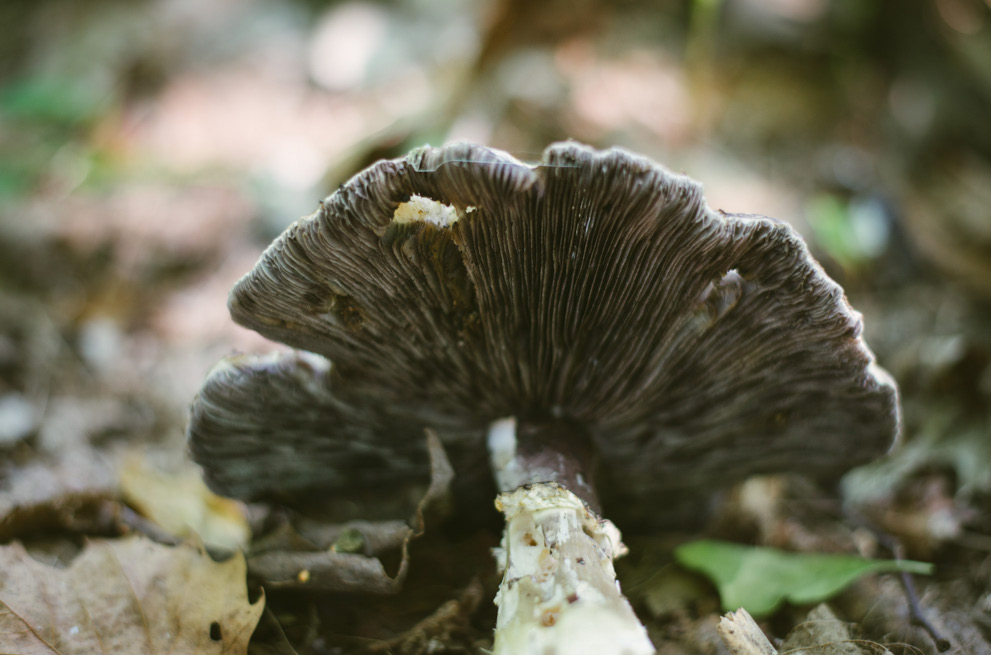 All mushrooms are fungi, but not all fungi are mushrooms! The word “mushroom” refers to the fruiting body of certain fungi that can be seen by
the naked eye and picked by hand. Mushrooms can grow from many different substrates and occupy many different ecological niches. There are countless different shapes, colors, and morphological characteristics that mushrooms express. Many times mushrooms have a very short lifespan so they can be
difficult to study in the field. A mushroom is only one piece of the larger fungal life cycle. 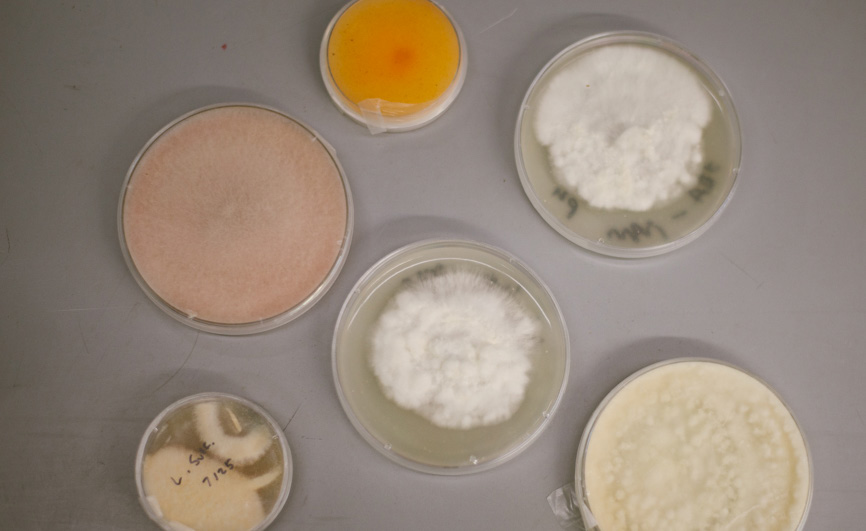 When the environmental conditions are right, mycelium will form mushrooms. Some fungi are very particular in what they need to switch over from mycelial growth to producing a mushroom. The most commonly cultivated mushrooms do not require much to induce fruiting. The mushroom’s main role in the life cycle is to produce spores. Spores are similar to seeds in that they are the reproductive elements of the organism. They are microscopic packets of genetic material that are distributed by insects, rain, and wind to hopefully find a new
food source. Spores are produced by mushrooms in the tens of thousands. In fact every breath we take on this planet we inhale mushroom spores. In the wild, the mushroom life cycle rotates between these 3 phases -
mushroom, spore, mycelium - in a constant evolution of change and growth. Amazingly mushroom tissue can revert to mycelial growth for many species of mushrooms. This is extremely useful for the cultivator as exact clones with the same DNA can be taken from mushroom tissue and further expanded. These clones from individual mushrooms are called strains. 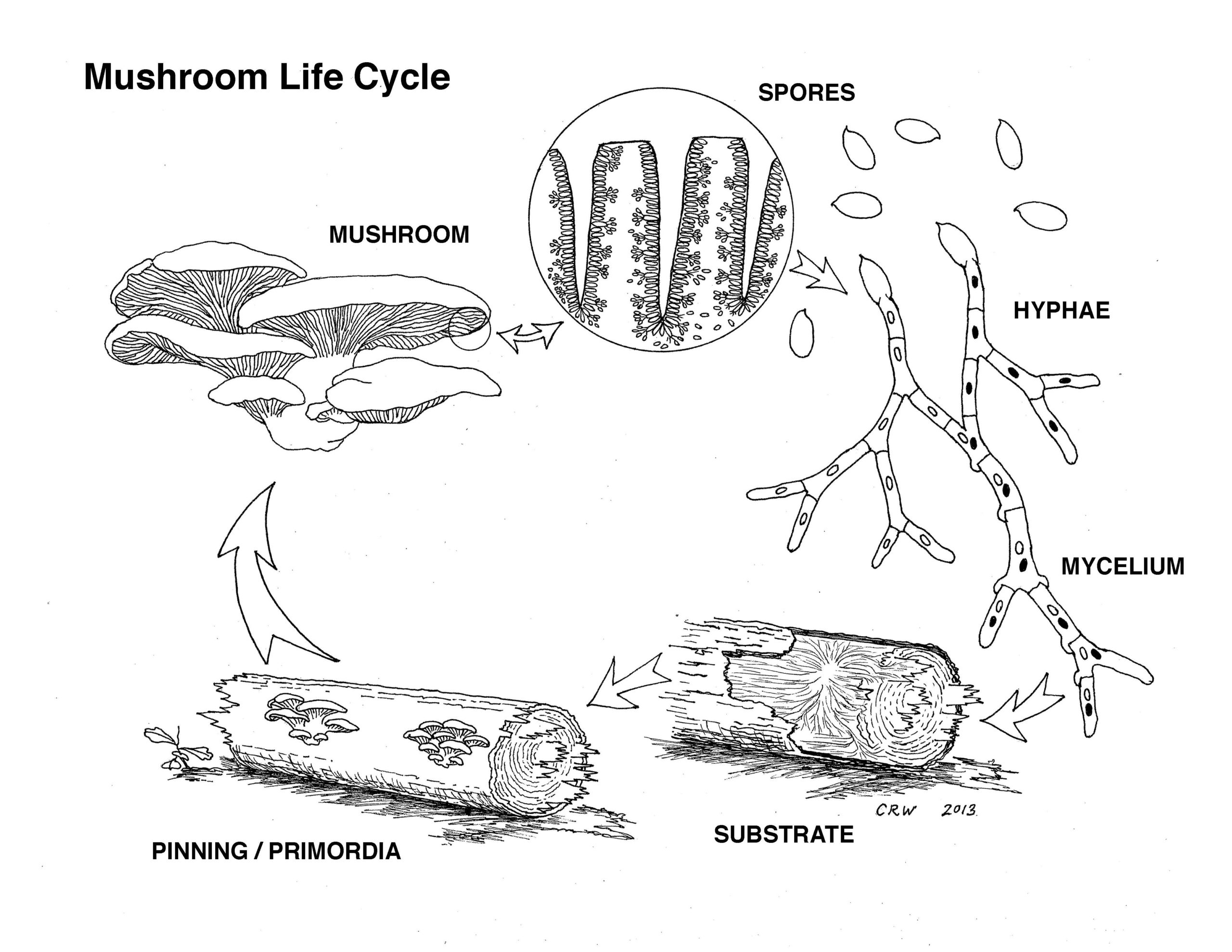 Mycorrhizal fungi form beneficial partnerships with plants and trees, trading water and nutrients for carbohydrates and sugars. Over 80% of plants have mycorrhizal partners. These fungi not only extend the root zone but they also link together different trees and tree species to exchange information and resources. A small amount of mycorrhizal fungi (Examples: truffles, porcini, chanterelle) produce mushrooms. These mushrooms tend to be high value because they are extremely difficult to cultivate. Mostly they get to market through wild foraging and not cultivation. If you are trying to cultivate mycorrhizal fungi not only are you growing the fungus but you also need to worry about growing the tree species properly and creating the proper soil biome to successfully produce mushrooms.

Parasites and Pathogens feed off living plants and trees and can range in their impacts; these are the disease fungi often focused on in forestry and agriculture. These fungi are not commonly cultivated but some mushroom producing parasites can also be saprophytic and easily grown like cordyceps and maitake. Others are great specialty mushrooms
that are not readily cultivated like chaga and honey mushrooms.

Saprophytes decompose dead organic matter (logs, woodchips, straw, sawdust, grain hulls, etc.) as a food source. These fungi are the reason we are not buried in dead organic material. The most commonly cultivated mushrooms: agaricus, oyster, shiitake, and lion’s mane are saprophytes. These are the easiest mushrooms to grow because you can work with dead material which is easy to manipulate. 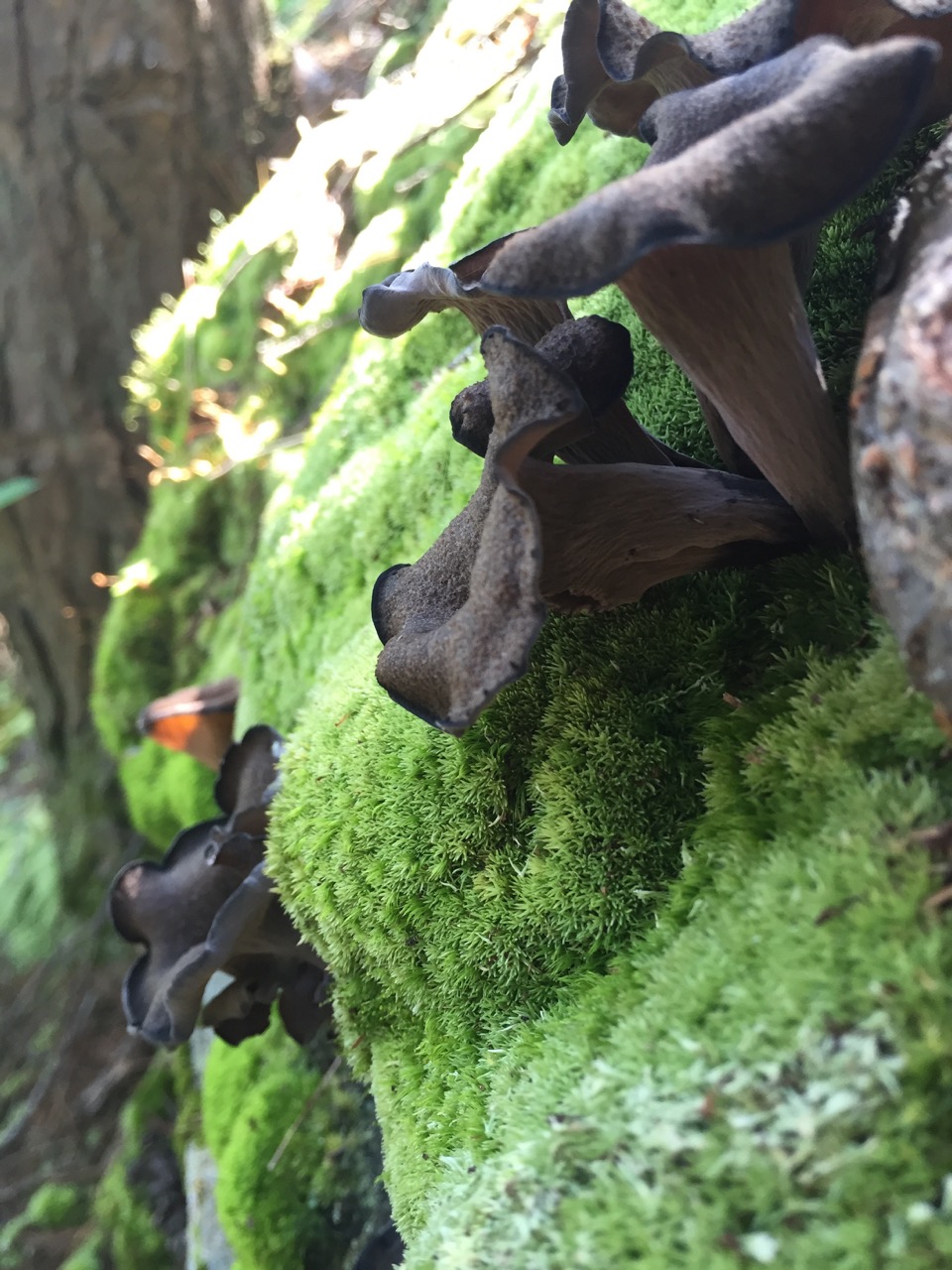 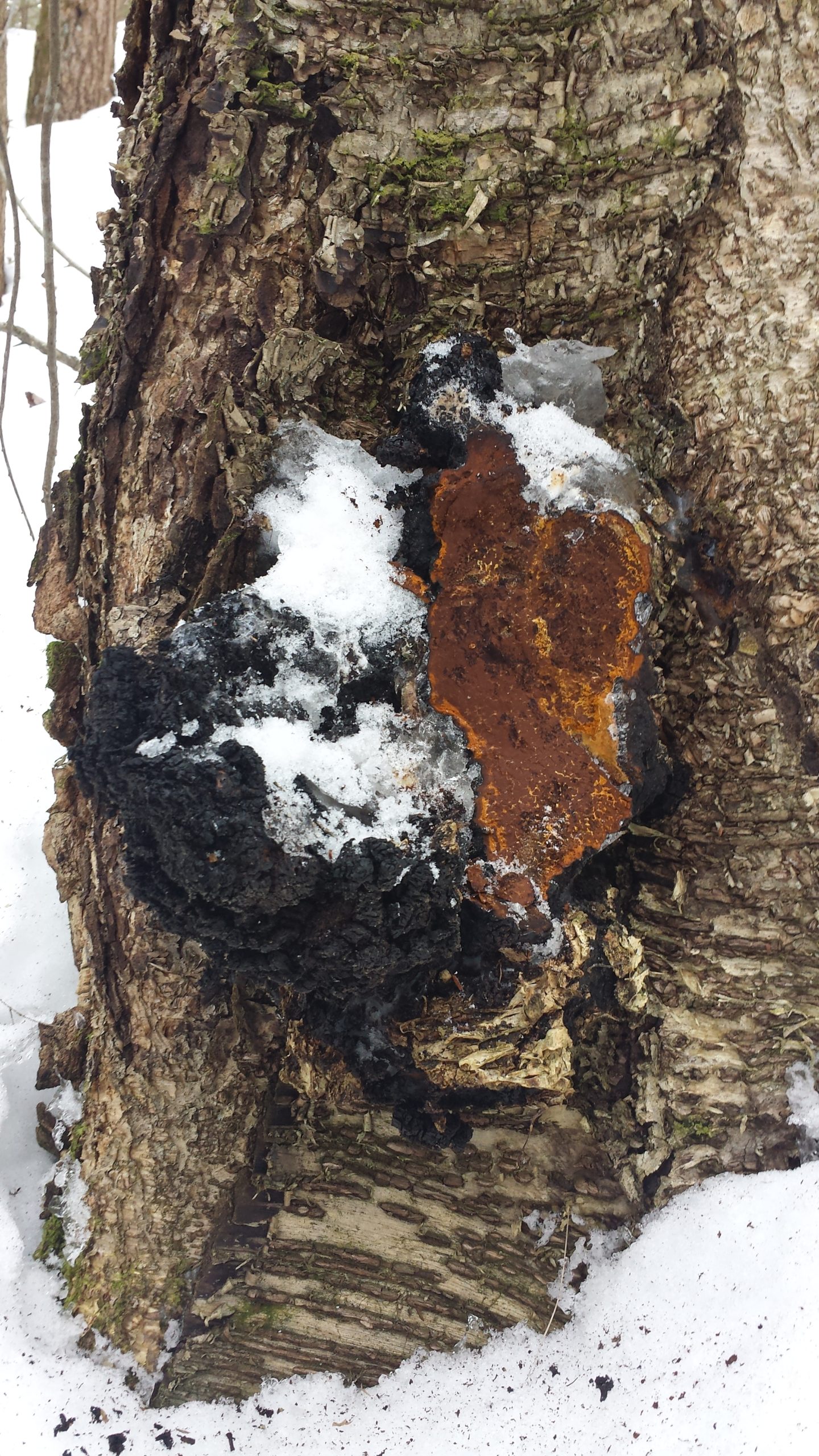 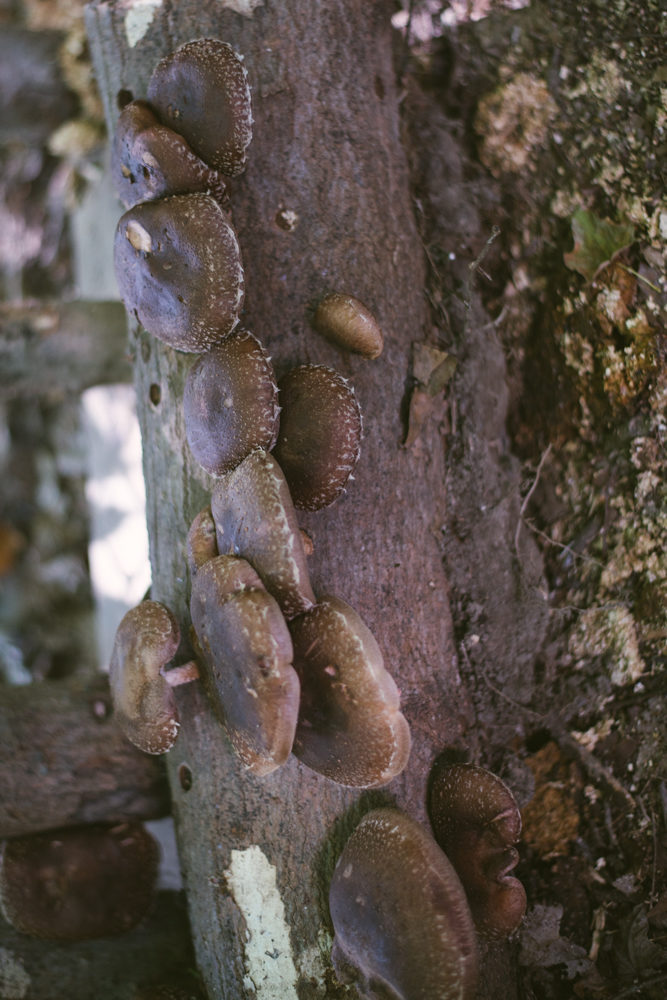 Mushrooms are highly nutritious and medicinal food, with twice the protein of most vegetables and rich in all the essential amino acids that humans need in their diet. They offer an excellent protein source with zero saturated fats, along with dietary fiber and minerals. Mushrooms also offer an impressive array of medicinal compounds that offer antiviral, antimicrobial, anti inflammatory, and immune modulating benefits. (Chang, 2004 and Wasser, 2002) 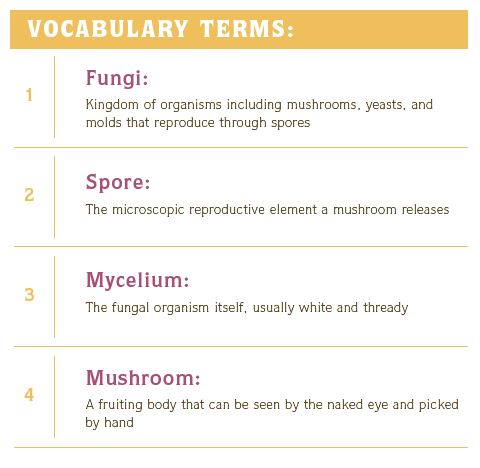 While mushroom poisoning is actually a very rare occurrence, many people are afraid of this possibility. It’s important to learn how to properly identify any mushrooms you are growing to ensure you don’t consume a toxic species by mistake. After learning the key morphological characteristics to look at, beginner identification is not hard to master.