Specialty mushrooms are defined by USDA as any species not belonging to the genus Agaricus (button, crimini, portabella). The most common specialty mushrooms are shiitake (Lentinula edodes) and oyster (Pleuterous ostreatus), which represent the second and third most produced mushrooms in the United States (USDA-NASS, 2018). 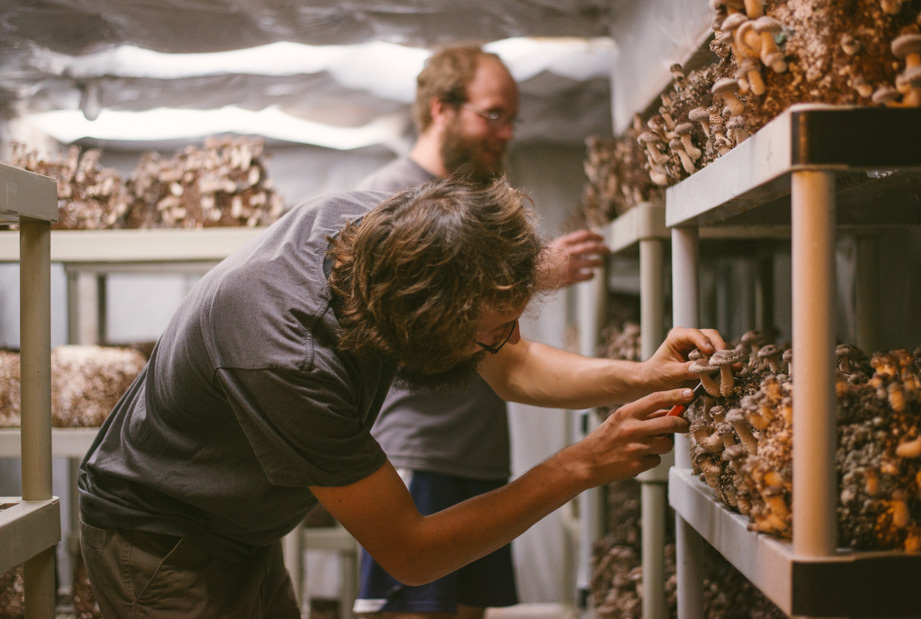 The roots of mushroom production in the US are linked also to the late 60’s and early 70’s, when the amount of people growing psilocybe mushrooms at home was rapidly expanding. Several books, Psilocybin: The Magic Mushroom Grower’s Guide, published in 1975 and 8 years later The Mushroom Cultivator opened the door for many home scale specialty mushroom cultivators. Slowly, supplies like flow hoods, pressure cookers, and the necessary information became available for potential growers of specialty mushrooms. In the 2000’s with the continued growth of the local agriculture movement, small-scale mushroom farms started to pop up around the country. Now in 2019, over 300 small-scale mushroom farms are located around the country growing anywhere from 20 pounds to thousands of pounds per week.

The cultivation of mushrooms is relatively recent in the agricultural evolution of humans. In Asia, mushrooms were first cultivated in the 12th century. Wu San Kwung is credited as the first shiitake cultivator in the world. Somehow, he found that beating the logs and slashing the bark promoted fruiting of the shiitake mushrooms. Very inefficient methods of cultivation relying on spores colonizing the logs were used until the mid 1940’s. At this point folks began to use pure tissue cultures, mycelium on a wooden medium, to inoculate logs. This quickly expanded the shiitake industry in Japan. Around the same time, cultivation on sawdust was reported as a method for testing strains. It wasn’t until the 1970’s that sawdust block production was used commercially. This means that the method of cultivation MOST specialty mushroom farms in the world use has only been around for about 50 years! No wonder there is so much to learn and improve upon.

Sales have increased with demand. In 2017, production of specialty mushrooms grew by four percent from 2016 levels to 25.4 million pounds with a sales value of $96.2 million. This averages 0.08 lbs produced per capita, compared to the national demand average of 4lbs/per. The other 3.92 lbs per capita were provided from the agaricus industry. Slowly the demand for specialty mushrooms is increasing and clearly there is lots of room for growth. In 2017 there were only 226 growers commercially producing specialty mushrooms in the United States (USDA-NASS, 2018). In a previous USDA-SARE-sponsored national survey of shiitake growers, 89% of respondents indicated that demand consistently exceeded supply in their region (Mudge, 2011). A 2015 Chatham University study interviewed 23 Northeastern buyers who reported needing 7,075 pounds of shiitake (307 lbs. per buyer) annually to fulfill customer demand, but only 2,060 pounds (29% of demand) of locally-produced shiitakes were available for purchase. Seventy percent of these buyers expected demand for forest grown shiitakes to increase over the next five years (Matthews, 2015). 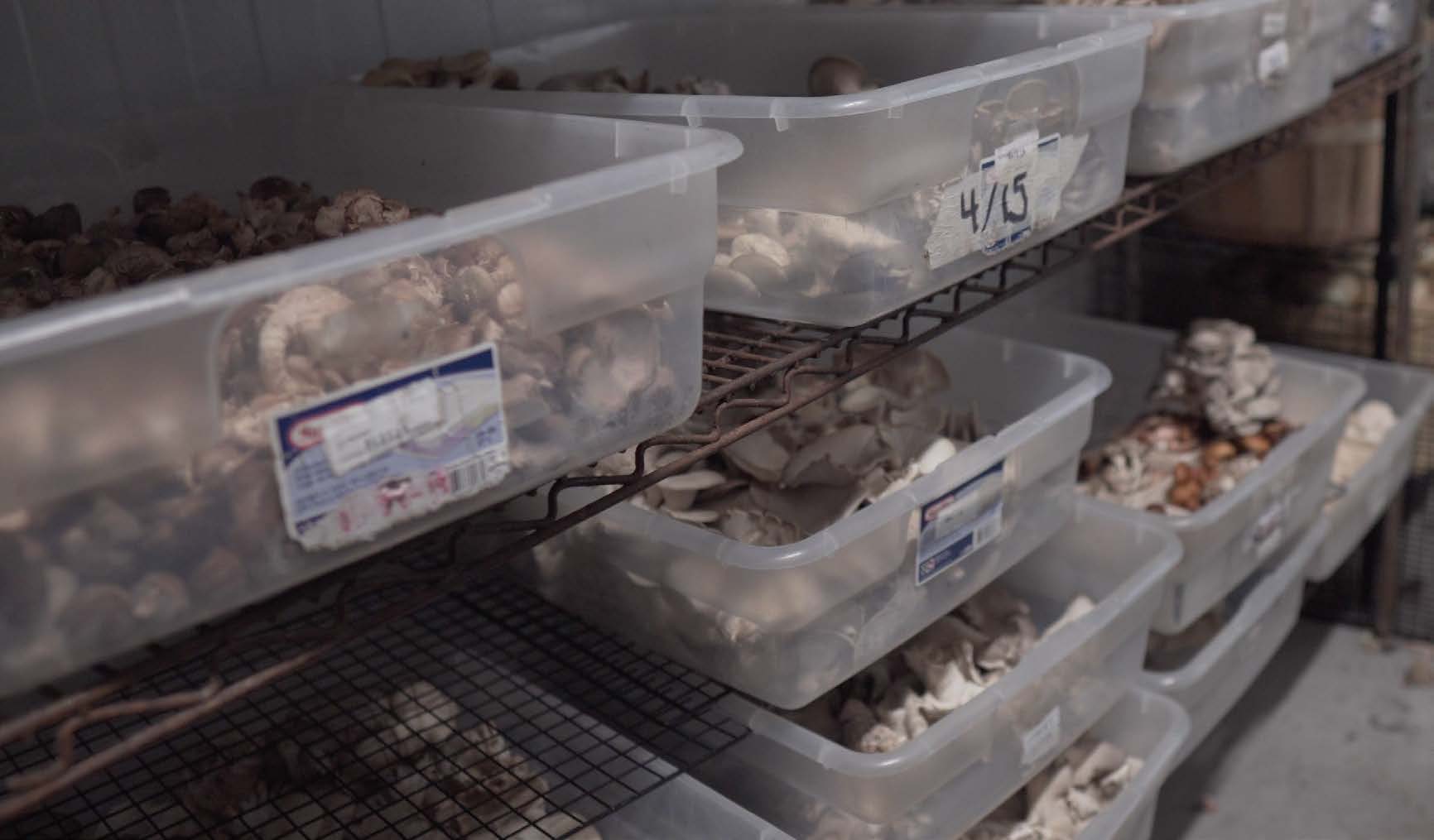 Economically viable farming enterprises often require large investments in land and equipment. These investments, plus long learning curves on production and marketing, tend to limit who can enter traditional
agricultural production of crops and livestock. Specialty mushrooms, in contrast, are unique among agricultural products as they are of highvalue, but production can be adapted to a wide range of production environments. Most notable is the low square footage requirements to achieve profitability. For example, our previous field research indicated that one half-acre of woodland can support a 1,000-log shiitake operation. The business would cost $4,740 to establish and would yield approximately 1,040 pounds of mushrooms or about $12,480 of gross
income, or $24,960 per acre (Mudge, 2013). Cornell Extension Agency (CEA) mushroom growers consulted reported better profit potential for indoor production as compared to outdoors. They provided estimates of
$1 to $3 per square foot in net income, representing a potential $43,560 to $130,680 income per acre for indoor growing operations.

There are many opportunities opening up involving the use of fungi in many different sectors. Specialty mushroom cultivation is a skill that can slowly be crafted and evolved to do many things. Some of the fields that
are starting to involve specialty mushrooms and the growth of fungi are:

These fields are in their infancy and have a lot of work to be done to evolve into healthy industries or commercially viable processes. The possible impact they could have on our world is huge. The development
of people and resources studying and working with mushrooms in all of these different ways will hopefully grow in the coming years. In China, there are over 10 mushroom institutes and hundreds of scientists studying mushroom cultivation. Here in the US, there is really only one academic department at the University of Pennsylvania that studies mushroom cultivation. The extension program at Cornell Small Farms Program is the
only institution focused on specialty mushroom research and education. Because of this, the private sector and small scale mushroom farms need to continue leading the way in research and development of these opportunities. 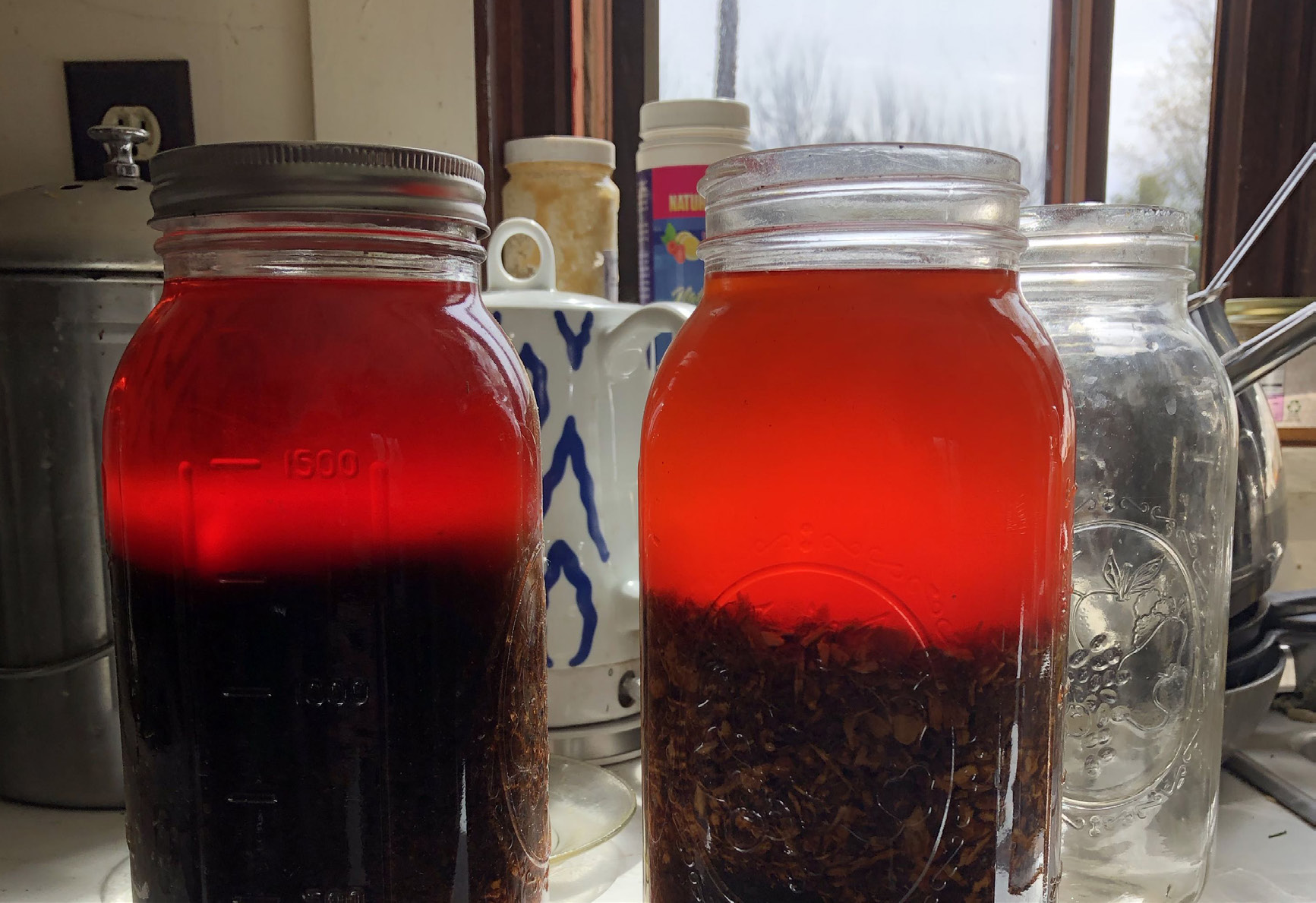 MYCOTEXTILES
This is a new field being led by Ecovative located in New York state. They have introduced the concept of using dried and molded mycelium as a textile. Products have been developed to replace packaging material, plastic parts, and even to be used as insulation. Building materials and art installations have all been created using organic matter and mushroom
mycelium. Reishi is one great species for making mycotextiles because of the density of the mycelium.

MENTAL HEALTH AND HEALING
We could talk all day about psilocybe mushrooms, but for now a paragraph will do. Johns Hopkins University is leading the charge in taking “magic mushrooms” out of the medieval dungeons they were placed in during the 1960’s to reveal the opportunities for working with these mushrooms. One study they looked at was improving depression and anxiety in terminally ill
cancer patients. After a single session with psilocybin mushrooms, eighty percent of participants reported a significant reduction in depression and anxiety six months later.

Psilocybin mushrooms are also being explored for their ability to help decrease addiction, cope with PTSD, reduce anxiety and depression, and
connect with god. In November of 2018, there was even a study conducted looking at the scheduling of this mushroom, which is currently a Schedule
1 drug. A Schedule 1 drug is classified as having “no currently accepted medical use and a high potential for abuse” (DEA, 2019) Confirming what many have known all along, based on the 8 factors of controlled
substances, the scientists recommended it be switched to a Schedule 4 drug, similar to prescription sleeping aids. Shout out to Oakland, CA and Denver, CO, the first cities to decriminalize psilocybin in 2019.

MUSHROOM SUPPLEMENTS
The functional mushroom industry is expanding rapidly with expected sales of $34.3 billion by 2024, up from 20 billion in 2018. (Mordor Intelligence, 2019) The projected CAGR (compound annual growth rate) has increased over the last year, according to Research and Market reports. In 2018, it was reported that the market is expected to grow at a rate of 6.4%, while in 2019 an expected increase of 8.04% was reported.
As consumers become more educated about what is in their mushroom supplements, US mushroom farms will be able to tap into this market more heavily. Consumers will likely want to shift away from foreign produced supplements as well as away from mycelial-based products.This positions American mushroom farms strongly to begin offering value-added products
to this extremely fast growing functional mushroom market.

MYCOREMEDIATION
This is a process of using mycelium to remediate toxins on this planet. As our waste issues grow in both quantity and quality, developing a variety of solutions is important. Mycoremediation is slowly becoming one of those solutions. Fungi can be allies in breaking down plastics, petrochemicals, pesticides, and organic matter. With the growth of small scale mushroom
farms around the country, the amount of mycelial biomass available to any one location is expanding rapidly. Learning to apply this “waste” mycelium
in a remediation setting would allow local solutions to toxic problems. It should be noted that goals for mycoremediation should not be mixed with production of edible or medicinal products, though the spawn production sector can address all these opportunities at once. 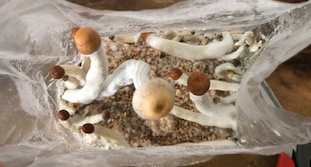 Along with all of these new opportunities specialty mushroom consumption continues to increase in the United States and will keep growing in the American diet. The specialty mushroom industry seems to be heading for more growth and expansion. More mushrooms will be cultivated and consumed, while the applications and areas of use will expand.