When I reflect on my own skills as a mother, I cannot help but also think about my skills as a farmer.

This morning our family celebrated a milestone. Our oldest child, Johnny, boarded a big yellow school bus and rode off into the horizon as a Kindergartener while his little sister Ruby looked on seeming a little jealous of his new mode of transportation. He was super excited and I managed to keep the tears to a manageable level. And as these life events have a tendency to do, it makes a mother reflect on her success raising her children. 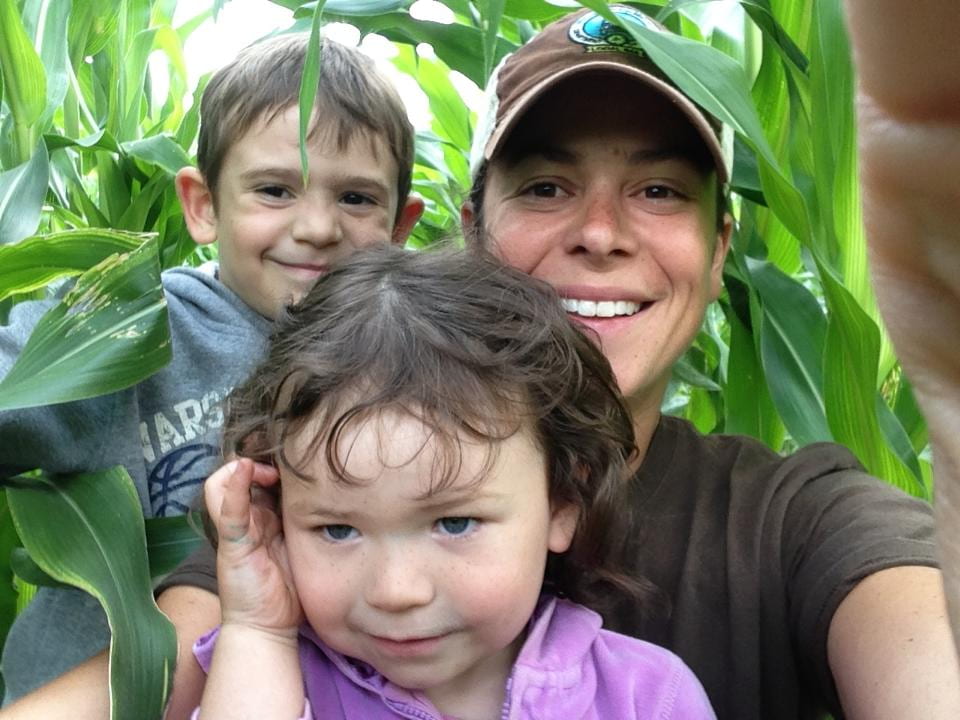 Kirsten with Ruby and Johnny in the neighbors’ corn field. Farming with kids means making your own fun sometimes … like an impromptu corn ‘maze’ during field scouting. Courtesy of Kirsten Workman.

When I reflect on my own skills as a mother, I cannot help but also think about my skills as a farmer. Being a farmer and being a mother have so many things in common. They both require fortitude, flexibility, creativity and harbor elements of surprise, shock, and awe. I am always amazed by those women who pull it off so effortlessly. I always feel like Pig Pen from Charlie Brown, running around with a tornado of dust and debris as I jump from one imminent task to the next. Move the cows, water the plants, make dinner, shut the greenhouse, give someone a bath (animal or child), get the kids up … you get the idea. When you think about it, they are basically the same task. You are ushering something from a seed or egg into the world, and then caring for it as best you can — hoping it will turn out as the best of its class, be it animal, vegetable or human. Along the way, however, you learn patience, persistence, humility and how to ask for help. You get dirty, you get wet, you laugh and you cry. You set standards and create systems … all hoping for a successful outcome. 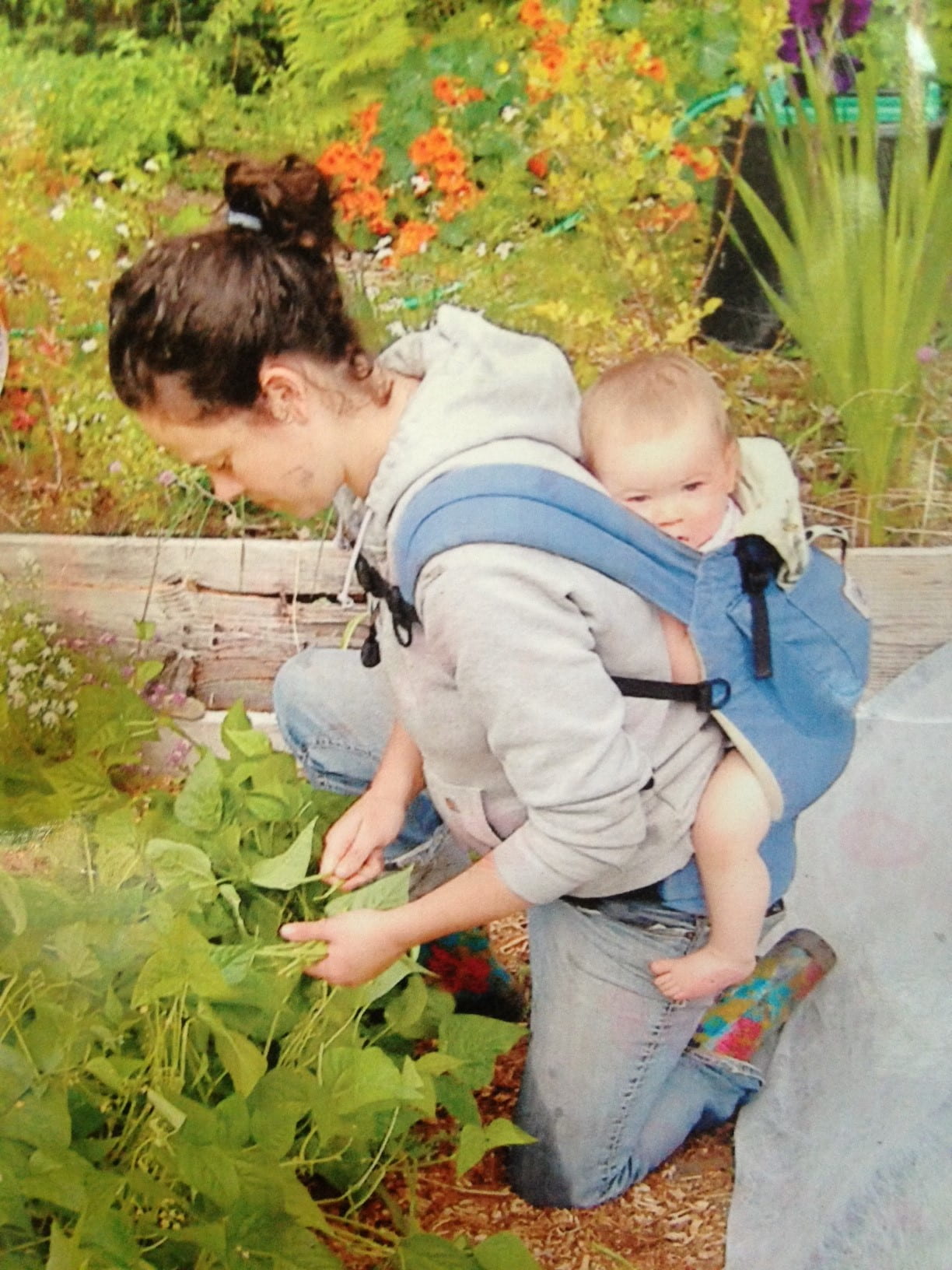 Kirsten picking green beans with her daughter, Ruby, in the pack. Multi-tasking is a must for farming moms! Courtesy of Kirsten Workman.

There are many times … let’s say when you have a baby strapped to your chest and a toddler running amuck while you try to herd 300 chickens into their pens for the night that you feel guilty for not giving your kids all the attention they deserve. But then if you look back at how they get to grow up … knowing where their food comes from, seeing things raised from seeds or babies that then in some fashion or another end up on their plate; knowing the meaning of a hard day’s work; living outside whether it’s comfortable or not; coming up with all sorts of imaginary plots, all played out in the theater of an old barn; naming their dinner menu items by the farmer who grew them; wowing their friends with their knowledge of not just tomatoes, but ‘Juliette’ or ‘Moskovich’ Tomatoes … I think it’s worth all the times they spent in their car seats while we tended to some farm emergency, the naps they took in the stroller inside the greenhouse in March, the Saturdays spent at Farmers Market stands instead of playgrounds, and the dinners that happened after dark all summer.

All in all, I am happy for the life we have chosen for our family. Although it is not an easy feat, I am proud to be able to raise my children in connection with the land, the weather, the ups and downs of farming, and the people who we interact with as a result of our agricultural pursuits. I hope when they grow up they have fond memories of their childhood and are also glad their parents chose to teach them to work hard, eat well, and roll with the punches. 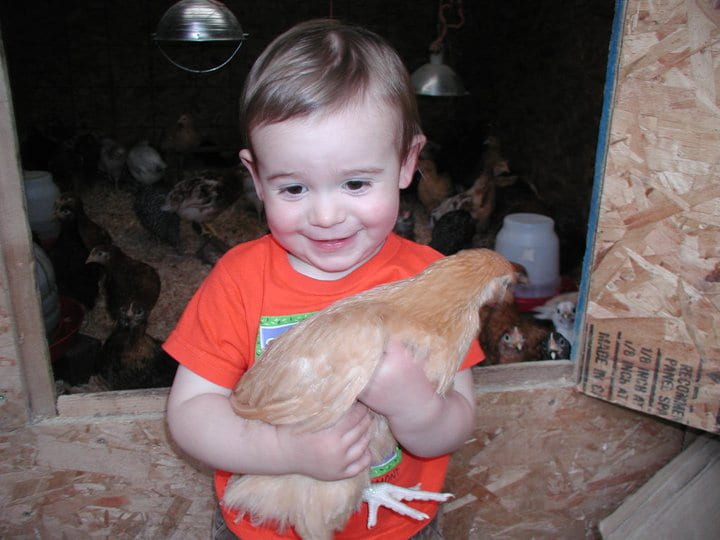 Little Johnny holding a Red Sexlink pullet. Farm animals are an important part of teaching kids about the cycle of life on a farm. Courtesy of Kirsten Workman.

Kirsten Workman is an Agronomy Specialist with UVM Extension’s Champlain Valley Crop, Soil & Pasture Team based in Middlebury, Vermont. She and her husband, Paul, have owned, lived and worked on farms since before their kids were born — both in Washington state and in Vermont. She can be contacted at Kirsten.workman@uvm.eduor 802-388-4969, or check out www.uvm.edu/extension/cvcrops.

Women make up more than half the US population, and own an increasing number of farms. Surveys show that women own or co-own nearly half the farmland in the Midwest. But they are under-represented on the boards of policy-making bodies, and often encounter communications barriers when accessing information from agencies and institutions.

Women’s Farm & Ag Network (WFAN) exists so that women can give each other the information, connections, and encouragement they need to be effective practitioners and supporters of sustainable agriculture and healthy localized food systems.

WFAN members come from all across the U.S. and several other countries. They are diverse in ages (ranging from teens to eighties) and backgrounds. They are farmers, urban gardeners, environmental educators, community activists, academics, and others who care about food and our environment

This article was originally published in 2013 on the Women’s Agricultural Network Blog, when Johnny was just starting Kindergarten and Ruby was 3. Johnny is now 11 years old and Ruby is 9.

Kirsten Workman is an Agronomy Specialist with UVM Extension’s Champlain Valley Crop, Soil & Pasture Team based in Middlebury, Vermont. She and her husband, Paul, have owned, lived and worked on farms since before their kids were born — both in Washington state and in Vermont. She can be contacted at Kirsten.workman@uvm.eduor 802-388-4969, or check out www.uvm.edu/extension/cvcrops.
Posted in Uncategorized